Regular clashes between the Egyptian army and militants on Gaza's border are terrifying Palestinian residents in Rafah. 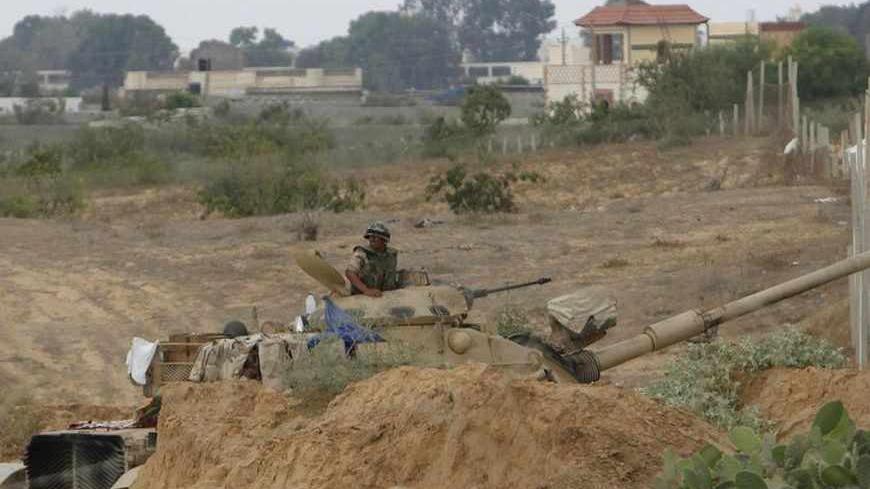 RAFAH, Gaza Strip — A few dozen meters from the Palestinian section of Rafah, clashes continue between the Egyptian army and police and unidentified gunmen.

That small distance separating the two Rafahs is overwhelmed by the sound of bullets being exchanged between the two sides, causing fear and panic among the population of the town located on Gaza’s southern border.

Ever since the Egyptian army dismissed President Mohammed Morsi on July 3, the Egyptian part of Rafah has seen clashes and explosions accompanied by military movements in the Sinai along the Egyptian border.

That scene repeats itself daily. The constant low-flying Egyptian helicopters have reminded local Palestinians of the recent Israeli war on Gaza 2012, and of the Israeli bombing of houses near the border before Israel withdrew from Gaza in 2005.

After more than 40 years of separation, the two Rafahs are united in the sound of explosions, the hum of aircraft, and the roar of battle, which have become part of the daily routine. The Palestinians suffer from the explosions caused by Israel as well as those caused by Egypt.

Ahmed Afaneh fears for his five children due to the violent explosions rocking his house near the Rafah border crossing. Afaneh told Al-Monitor that he feels as if those clashes were happening in his neighborhood and inside his home, and he fears that shell fragments will hit his house.

Ahmed Shaheen, a 30-year-old who lives on the border, said his youngest son is afraid to go to sleep at night when he hears the sound of clashes between insurgents on the border with Egypt.

Speaking to Al-Monitor, Shaheen said, “Bullets are being shot over the rooftops of Palestinian houses, which causes fear and apprehension. However, there is nothing we can do and it seems that that this situation is likely to drag on.”

Shaheen was speaking angrily, puffing away on a cigarette. “Our children continue to suffer from psychological effects as the result of successive Israeli wars on Gaza. Moreover, today we are dealing with Egyptian bullets and explosions. For how long are we going to live with fear and anxiety?”

Yehya Yaqubi, who lives near the border crossing, is afraid that the explosions, which are thought to be linked to Cairo’s stability, will continue.

“These explosions are harming us psychologically. [They are also causing] tension, worry and questions about their source. We have gotten used to the Israelis shelling us. But if the source [of the bullets] is the Egyptian Rafah, which is very near, then that will have a significant effect on us and on our children if it continues,” he told Al-Monitor.

He explained that these explosions and the failure of the Egyptian army to reassure the people of Gaza living close to the border raised fears among the population of greater tension on the border.

Yaqubi is surprised by the Egyptian flyovers above Rafah and Khan Younis in the southern Gaza Strip, noting that they are causing panic because people think they are being targeted.

A number of residents in Palestinian Rafah told Al-Monitor that the Egyptian army has sent military reinforcements to the Gaza-Egypt border since the army’s leadership deposed Morsi last month and cracked down on the smuggling tunnels under the border, destroying hundreds of them. The UN estimates that about 80% of the tunnels used in smuggling from Egypt to Gaza Strip are no longer functional.

An old man named Ahmed Zaghbar was among the residents speaking to Al-Monitor. He lives in a dilapidated house near the Rafah crossing. “These sounds remind us of the daily acts of the occupation forces before withdrawing from Gaza. Bullets used to be shot from everywhere, hitting walls. The ongoing dire conditions in the Egyptian city of Rafah warn that the situation is likely to degenerate but this time at the hand of the Egyptian army,” he said.

According to the Egyptian media sources, last Monday [July 29] at dawn one Egyptian soldier was killed and eight were wounded in an attack by unidentified gunmen on an army camp in the al-Safa area in Rafah, North Sinai. On the same day, a series of bombings rocked the cities of Sheikh Zowaid and Rafah. An army camp in Egyptian Rafah was targeted.

The Gaza government and Hamas were surprised by the Egyptian flyovers, which happened three times in past month.

Hamas spokesman Salah Bardawil said to Al-Quds Al-Arabi newspaper: “There is no doubt that the Egyptian flyovers in the Gaza Strip worry the Palestinians because they consider them to be no different, in their essence, from the way in which the Israeli Air Force violates Palestinian sanctities. This whole matter looks suspicious because it is happening without any coordination with the Palestinians, but rather unilaterally. Perhaps it is taking advantage of what is happening in Egypt. It seems that they are preparing for something.”

The deputy head of Hamas’s political bureau Moussa Abu Marzouk said on July 22  that the Egyptian overflights above Gaza indicate that Egypt has returned to exercising sovereignty over the Gaza Strip, which it lost after the 1967 aggression.

Gaza government spokesman Ihab Ghussein, also on July 22, criticized the Egyptian helicopter overflights and considered them “unacceptable at this time. We are waiting for the official Egyptian response to clarify the reasons for the flyovers.”

Amid all these events, the people of Rafah are waiting for the return of calm so that they can return to their jobs, which many have lost with the closure of the border tunnels.