The head of the Sinai Tribes Union has thrown his support behind Gaza as Egypt's army tightens its blockade on the Hamas-ruled territory. 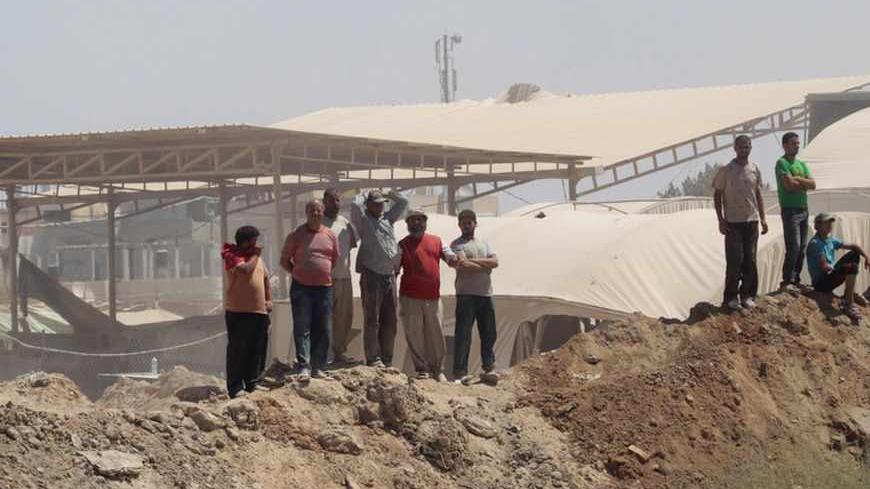 GAZA — Continuous explosions conducted by the Egyptian army have been reducing Egyptian homes near the Gaza border to rubble. These explosions pulverize the homes, while some of the debris even reaches the wall separating the Egyptian and Palestinian sections of Rafah.

The purpose of these explosions is to destroy the underground tunnels connecting the two parts of Rafah.

The head of the Sinai Tribes Union, Sheikh Ibrahim al-Menaei, described the Egyptian army’s actions as “extremely dangerous and barbaric” since the army is demolishing the homes — complete with interior furnishings — of the citizens of Egyptian Rafah on the grounds that there are tunnels beneath them.

The tribes that form the union are at odds with the Egyptian army, which recently began to carry out military operations in the Sinai against so-called terrorists. Yet, according to Menaei, residents of the Sinai are not hostile to the army and they are not the source of terrorism and tensions. "People who came from outside the Sinai, and have been smuggling weapons into the region for two years, these are the two fighting the army," he said.

He called on the Egyptian army to hold a dialogue with the Sinai tribes and to cease this dangerous action “because the decision to demolish houses is rejected by the people of Rafah and the Sinai, and will increase tensions with the military, which will not be able to impose anything on the people, in light of the fact that [the army] is not giving the people advance warning before bombing their homes and is blowing up their property and belongings without any compensation.”

There are 11 Sinai tribes, all of which support ousted President Mohammed Morsi and reject the military coup, according to Menaei.

On Sept. 3, tribal leaders decided to form a tribal council to present urgent national issues to the authorities. Most notably, they want to discuss the home demolitions near the border in Rafah, the continued closure of the Sheikh Zowaid square — which has more than 200 stores — and the indiscriminate arrest and torture of innocent people.

Commenting on the tunnels issue, Menaei said that until now the Egyptian army has demolished 13 houses in Egyptian Rafah, pointing out that the communication between the Sinai tribes and the army is almost nonexistent.

Menaei discounted the possibility that weapons are being smuggled between Egypt and Gaza. “The army may wish to keep certain people out of Egypt. [But] those demolitions indicate that the army wants to isolate Gaza from the world in light of the continued closure of the crossing,” he noted.

Regarding the combatants that the army is fighting, Menaei said, “The Sinai has been uncontrolled for two years while the world’s intelligence agencies roam free in it. The army is fighting some Bedouins and some tribes and people from outside Egypt.” He said that the Palestinians are unlikely to engage in any military operations against the Egyptian army.

After ousting Morsi on July 3, the army has cracked down on the underground tunnels between Egypt and Gaza. The tunnels are used to supply Gaza with goods and material that the Israeli occupation prevents from entering through the crossings. The crackdown coincided with an Egyptian army military operation against unknown militants in the Sinai as well as unusual maneuvers on the border with Gaza.

Inhabitants on both sides in agreement

The Egyptian media, some political leaders and military officials have accused Hamas of engaging in military actions in Egypt and of intervening in Egyptian affairs. But the people of Sinai and the tribes — which are connected to the Palestinians by a network of underground tunnels, old relationships, trade and a common history — deny that the Palestinians are interfering in Egypt.

According to a number of workers who spoke to Al-Monitor, these tunnels are the only source of income for many inhabitants on both sides of Rafah. They oppose the demolition of the tunnels because there are no alternatives for income.

On Sept. 5, an Egyptian military source issued a statement saying that 95% of the tunnels and oil smuggling lines between Egypt and Gaza have been destroyed.

A tunnel worker on the Egyptian side, who refused to give his name, told Al-Monitor in a phone interview that the demolition of tunnels and houses has sparked a sharp dispute between some Sinai tribes and people on the one hand, and the Egyptian army on the other.

He said that the army no longer cares about the suffering of the people of Sinai, pointing out that the military operations and bombings against the army happened because the army considers the border inhabitants to be terrorists. He said that the army detains them under fabricated charges simply because those people make their living from the tunnels.

Ahmad al-Chaer, a Palestinian who previously worked in the tunnels but lost his job after they were destroyed, agreed. He told Al-Monitor that Palestinian and Egyptian tunnel workers have been affected by the demolitions and have lost their jobs and livelihoods. “There is no alternative work for us. The tunnels were our primary source of income,” he said.

On the Palestinian side, the security services of the Hamas government are protecting the border from any breach that could harm Egypt, at a time when the Egyptian army continues to demolish tunnels and the homes that contain them, in a border area that is considered very dangerous security-wise.

In this regard, the Interior Ministry spokesman in Gaza, Islam Shahwan, said that the Egyptian army continues to provoke the Palestinian security personnel at the border through insults and by pointing floodlights toward their positions.

He told Al-Monitor that some Egyptian soldiers have opened fire toward the Palestinian border and that Egyptian aircraft are infiltrating Palestinian airspace. He stressed that this is a serious provocation to the Palestinians.

Shahwan denounced the continued tunnel demolitions without finding the people alternative work. He stressed that the Egyptian army is setting up a buffer zone between the two sides and that this “will increases the suffering of our people and tighten the siege that has been imposed on Gaza for seven years.”

On Sept. 7, the Egyptian army destroyed six tunnels on the border as part of its ongoing campaign to set up a buffer zone.