Egypt's ambassador to the Palestinian Authority warns Hamas that its continued support for the Muslim Brotherhood will only cause it harm. 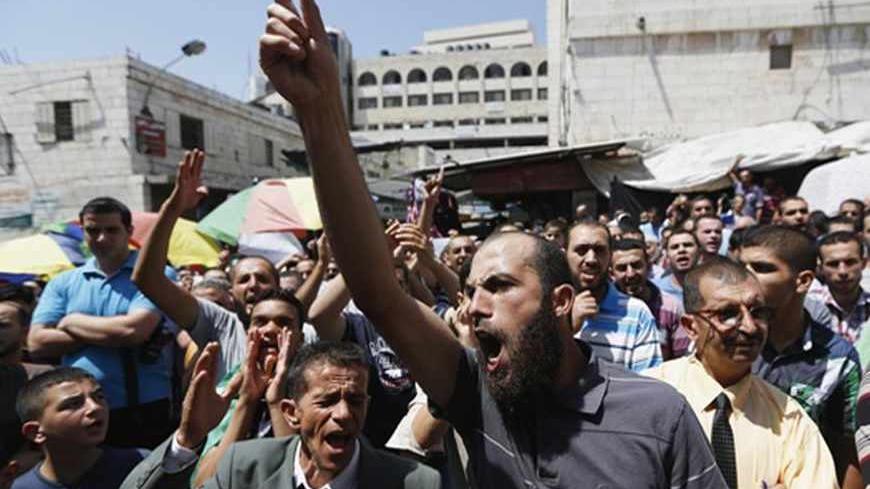 Palestinians shout slogans during a rally in solidarity with Egypt's deposed President Mohammed Morsi and in protest of the recent violence in Egypt organized by Hamas in the West Bank city of Ramallah, Aug. 16, 2013. - REUTERS/Mohamad Torokman

In a sign of worsening ties, Egypt’s envoy to the Palestinian Authority (PA) has accused Hamas of incitement against Egypt.

In an exclusive interview with Al-Monitor, Yasser Othman, Egyptian ambassador to the Palestinian territories, said Hamas and its government in Gaza were conducting an incitement campaign against Egypt through its media and mosques.

“It is shocking to us the degree to which Hamas is inciting against Egypt; its media and propaganda apparatuses have been fully exploited since the beginning of the January 25 Revolution to attack Egypt, its state and army and to defend the Muslim Brotherhood regime,” Othman told Al-Monitor during a phone interview.

While the ambassador reiterated that Hamas had, since the beginning of the revolution, deployed all its resources to side with the Muslim Brotherhood against the Egyptian people’s wishes, Gaza’s Prime Minister Ismail Haniyeh was quoted as saying on Aug. 16 that Hamas and the Muslim Brotherhood “shared the same educational and intellectual philosophy, but that the latter did not justify interfering in Egyptian affairs.”

The ambassador said that Hamas' permission for militant jihadist factions to organize a press conference in Gaza, during which they declared jihad against Gen. Abdel Fattah al-Sisi, was met with official Egyptian condemnation. But Yousef Razqa, the political adviser to Gaza's prime minister, rebuked the assertion that Hamas had sanctioned the call for jihad. “Hamas’ espoused positions should not be equated with the negative positions and measures taken by some against the resistance, or by those who have forsaken their nationalist responsibilities,” he told Al-Monitor.

Razqa added, “The Egyptian press has been negatively interfering in Palestinian affairs, as evidenced by the fact that Palestinians in Egypt are living in a state of shock and alienation, unable to identify themselves as Palestinians for fear of being attacked.”

The envoy denied Egyptian media was publishing false news about Hamas, in response to documents leaked by Hamas that suggested Fatah had plotted a defamation campaign against Hamas in Egyptian media.

“Egyptian media outlets do not have to be all that perceptive to distinguish between forged [and real] documents. Anyone who says otherwise is insulting our media,” Othman said.

Egypt’s envoy backed claims by military figures in Egypt that Hamas elements were carrying out military operations in the Sinai.

“What has been said by security and military personnel is what is taken [to be true] in this regard. It is up to them to comment on it; however, from a political perspective, what is happening in Egypt is an internal affair. Egypt has called on all its brother [nations] to support it and at least commit to neutrality toward what is happening.”

Othman rejected media reports that Egypt was cooperating with Israel to secure the Sinai, stressing that it is “protecting its borders by itself.”

“We are not cooperating with anyone to protect our security. These reports are imprecise, and whoever leaked them did so out of hatred for Egypt and its army. What is happening in the Sinai is a battle between the state and terrorists,” he said.

The ambassador acknowledged, “Hamas is an important Palestinian faction with which we have had relations since its inception. Egypt only hopes that Hamas refrains from interfering in Egyptian internal affairs.” He also pointed out, “Hamas’ championing of one particular faction inside Egypt will only cause it harm and lead to tensions and the deterioration of relations with it.”

Hamas lost a powerful ally when the Islamist government of Mohammed Morsi fell, while its relations with Iran, Syria and Hezbollah deteriorated as a result of its stance vis-a-vis the Syrian regime, thus rendering the movement quasi-isolated.

Hamas and Egypt appear to be offering differing views of their relationship, with Haniyeh denying on Aug. 20 that “communications with the Egyptians had broken down.” Othman, on the other hand, said, “Communication with Hamas was confined to the relevant Egyptian authorities only.”

While Othman talked tough on Hamas, he applauded the position of the PA and its president, Mahmoud Abbas, on the most recent Egyptian events.

Othman asserted that relations between Egyptians and Palestinians had seen some turbulence in the past, “but our relationships with the Palestinian presidency and factions are good. We have relations and ongoing communication with civil society figures and organizations in Gaza. We do not judge Gaza based on one faction controlling matters, but rather we look at it based on [our] historical relationship [with it].”

Following Morsi’s ouster, Egypt’s army closed the Rafah crossing to Gaza and destroyed what the United Nations says was 80% of the smuggling tunnels that kept Gaza’s economy afloat amid a crippling Israeli siege.

The tightened Egyptian measures have resulted in an economic crisis in Gaza, with chronic fuel shortages and sorely missed revenue from the destruction of the tunnels.

But Othman insisted that Egypt stood with the Palestinians in Gaza in “stopping the blockade and Israeli aggression and supporting the [provision of] the essential needs for your livelihood. Our relationship with you reaches farther than any one faction.”

Othman added that the decision to close the Rafah crossing was the “result of conditions beyond our desire, as we became exposed to a terrorist war in the north of the Sinai demanding security measures that included closing the crossing and destroying tunnels.”

He said that the tunnels were destroyed because “many of them were being used in destructive activity that harmed Egypt’s national security. We are closely monitoring the internal situation in Gaza and working with the international community to provide all basic materials through the Karam Abu Salem crossing in the south of Gaza. We are pushing to find a viable alternative to commit to needs [in Gaza].”

Razqa, Haniyeh’s political adviser, hit back at allegations the tunnels were used improperly, saying such accusations were simply to justify their destruction.