Hamas Tries to Reconcile With Egypt

Hostile Egyptian public opinion might stand in the way of a reconciliation between Gaza and Cairo. 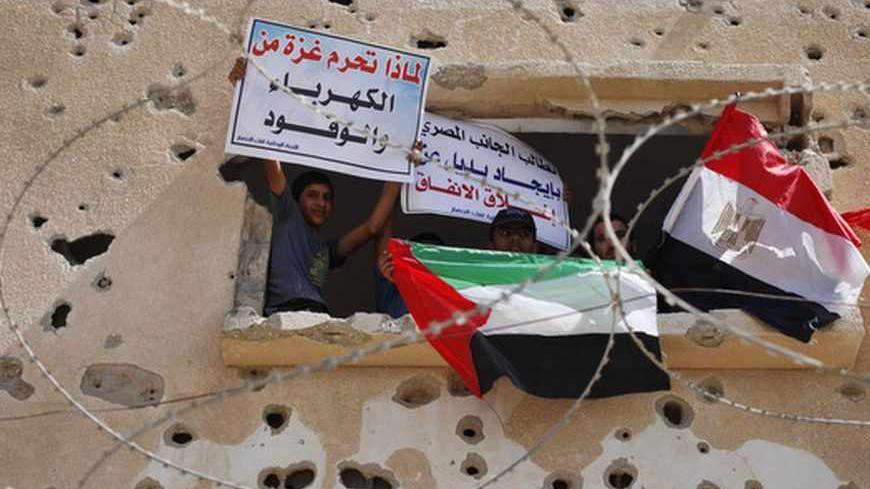 Palestinians wave a national flag and an Egyptian flag as they take part in a rally calling on Egyptian authorities to open the Rafah crossing, outside the crossing in the southern Gaza Strip, Sept. 16, 2013. - REUTERS/Ibraheem Abu Mustafa

After recovering somewhat from the initial shock of the ouster of Egyptian President Mohammed Morsi and the removal of the Muslim Brotherhood from power in Egypt, the leaders of the Hamas movement in Gaza are trying to reach an arrangement of understandings with Gen. Abdel Fattah al-Sisi to allow the opening of the Rafah crossing and ease tensions between them.

Al-Monitor has learned from reliable sources that messages to this effect have reached the office of the Egyptian strongman, including a detailed request to enable a delegation of Hamas leaders to travel from Gaza to Cairo. The trip would be aimed at clarification talks and a presentation of a detailed plan. The plan was conceived by Hamas Prime Minister Ismail Haniyeh, who closely supervised its preparation, in the hope that it would restore trust with Egypt and enable future cooperation.

Since the second revolution in Egypt on July 4, 2013, the Hamas movement has turned overnight from being a close friend to an enemy of the revolution and the Egyptian people. Hamas has been accused of being the main active element in turning the Sinai Peninsula into a terror enclave, which is responsible for the August 2012 murder of 16 Egyptian soldiers in the Sinai and threatens the country’s security.

Public opinion in Egypt has never before displayed such hostility toward Palestinians from Gaza, in general, and Hamas, in particular. The Egyptian media are also leading a militant line against the movement’s leaders, alleging that they cooperated with the Muslim Brotherhood in stealing the revolution from the people and that they allowed their armed militants to become the tool of the Muslim Brothers against Egyptian security forces.

Morsi, who will soon be brought to trial, is accused, among other harsh accusations, of allowing Hamas to attack Egyptian police stations and to attempt the release of terrorists jailed during the first revolution and the overthrow of President Hosni Mubarak.

According to the Egyptian court announcement, the charges against Morsi include an accusation that Hamas and Hezbollah activists, rather than innocent civilians as was claimed in the past, were the ones who acted in concert to free him from the Wadi al-Natrun prison in January 2011.

These accusations join a series of additional serious charges, including incitement to attack Egyptian officers and the killing of demonstrators during the protests against the Muslim Brotherhood that led to the regime’s ouster.

The strained relationship between Gaza and the new regime in Egypt has led Hamas to one of its lowest ebbs ever. The movement went back to being an isolated body, control over the Rafah crossing has become tight and oppressive, and most of the smuggling tunnels at Rafah have been sealed.

Surprisingly, Hamas leaders have been silent. They did not attack Sisi for the move to oust Morsi, and the harsh accusations hurled at them went virtually unanswered. The decision to wait and avoid angering Sisi and the Egyptian army ''until the storm subsides'' was a direct order on the part of Prime Minister Haniyeh.

Al-Monitor has also learned that in a meeting that took place in Gaza immediately after the overthrow of the Muslim Brotherhood, Haniyeh told all the heads of the movement in Gaza and his cabinet ministers that he would manage the crisis himself and that quiet diplomacy was preferable to an attempt at self-defense and retaliation.

Although it describes itself as the branch of the Muslim Brotherhood in Palestine, Hamas kept completely quiet and did not even condemn the ouster of elected President Morsi, its own flesh and blood.

And, more than two months since the outbreak of the violent events in Egypt and the sense of economic suffocation in Gaza that has become real and oppressive, Hamas has, as mentioned, sent Egypt an official request to be allowed to send a secret delegation to Cairo for talks.

A similar request was sent at the same time to the office of Egyptian Foreign Minister Nabil Fahmy, in the hopes and on the assumption that he is the one leading the moderate and measured policy line of the new government. Al-Monitor has learned that Fahmi has so far not responded to Hamas. Next week he is expected to travel to the United States at the head of the Egyptian delegation for the opening session of the UN General Assembly in New York.

And now, of course, the question is whether the Hamas feelers will succeed in persuading the Egyptian regime to try and calm tensions between the sides and attempt a reconciliation, which might lead to a relaxation of restrictions at the Rafah crossing.

Given the current negative attitude in Egypt toward the Muslim Brotherhood and Hamas, Sisi and interim Egyptian President Adly Mansour will be hard pressed to explain to the public such conciliatory moves with those considered collaborators of the Muslim Brotherhood and, more so, also responsible for a series of terror attacks in the Sinai and partnering with other terror cells in the Sinai, which threaten Egypt’s security.