Hamas chosen to unilaterally cut itself off from Israeli fuel and to replace it with gas from Egypt — a decision that has turned out to be a mistake. 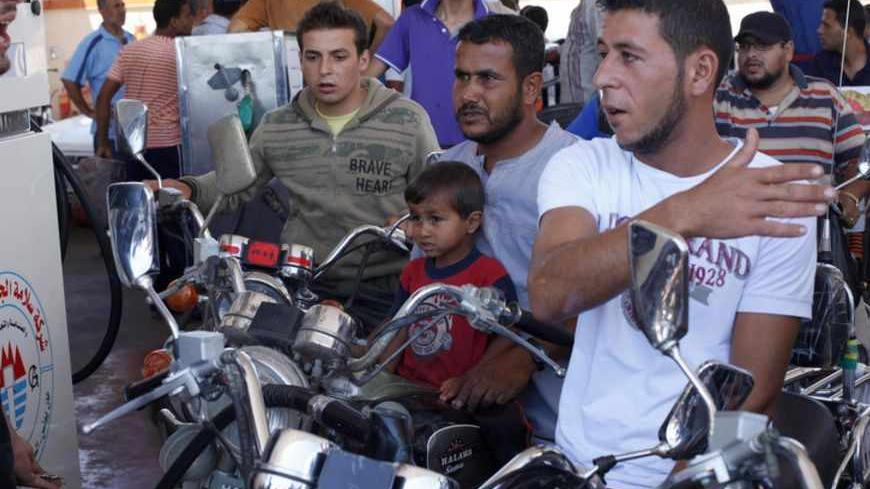 Palestinians wait to fill their motorcycles with fuel at a filling station in Khan Younis, in the southern Gaza Strip, June 16, 2013. - REUTERS/Ibraheem Abu Mustafa

Once again, there’s no fuel in Gaza. The gas stations have been emptied, cars are stranded, but this time the fury is not directed at Israel but rather at “our brother,” Egyptian President Mohammed Morsi.

Fuel to Gaza is supplied through the Rafah tunnels, usually at much cheaper cost than the prices Israel used to charge for supplying gas to the Strip. Ever since Israel imposed its blockade on Gaza and used the supply of gasoline and diesel fuel as a punitive tool, Hamas decided to cut itself off unilaterally from Israel’s fuel and to replace it with cheap gasoline from Egypt, pumped via makeshift pipes through the tunnels. That decision, as shall soon be made clear, turned out to be a mistake.

At first, everything looked rosy. Instead of $1.50 per liter of gas, Gaza residents got a bargain — barely 50 cents for a liter, and there was much rejoicing. The Egyptian gasoline is not of particularly good quality — the refinement is somewhat crude, but Gaza residents are not picky. Let’s not forget that during Israel’s tight blockade on Gaza (2007-08), some of them filled the gas tanks in their cars with cooking oil, which produced a suffocating white smoke but enabled them to start the engine and drive.

And then the crisis began. The government in Cairo decided that residents of Egypt should have priority in gas supplies, ahead of the Gazans.

Following the wave of terrorism from Sinai in recent years, Egyptian security forces started tightening their control over the passage of goods through the Rafah tunnels even more, and this did not benefit Gaza’s traders and residents, either.

The fuel was supplied in fits and starts. When the pipes dried up, the gas stations were shut down and, with them, a large part of the Palestinian economy. More affluent Gaza residents placed large tanks in their yards as emergency supplies for dry spells. But these supplies did not last very long.

Now, as mentioned above, it’s happening once again — but not because of the blockade. Egypt is the reason, this time. Gaza is once again paying the price of the ongoing internal struggles in the land of the Nile.

A giant protest against Morsi and his government is planned for June 30 in Cairo, with the participation of all factions and movements. The date of the protest, which has already been dubbed “the June 30 Revolution,” marks the first anniversary of the Islamist president’s term. According to organizers, the Muslim Brotherhood has derailed the achievements of the revolution which culminated in the overthrow of former President Hosni Mubarak, exacerbated the economic situation and violated human rights in Egypt. Some 1 million protesters are expected to attend the protest, which is meant to be similar to the ones that brought about Mubarak’s ouster, when the people expressed their will loudly to overthrow the regime. It is being billed as the biggest demonstration since Morsi, a Muslim Brotherhood representative, was elected president.

So how is all this connected to the fuel shortage in Gaza?

Sources in Gaza are convinced that the fuel shortage in northeastern Egypt, from Suez and Ismailia and up to the Sinai Peninsula, is premeditated. It’s supposedly designed to impair the mobility of the area’s residents and to make it hard for them to reach the planned protest in Cairo. This is a prevailing view in Gaza, and even if it’s pure speculation, it nonetheless reflects Gaza’s attitude toward its Muslim brothers.

The heads of the association of gas stations in Gaza, and most of the residents, believe they are paying the price of the disappointment with the regime of the Muslim Brotherhood, of which Hamas is one of the arms, and for which they had high hopes.

But not only have the passages between Egypt and Gaza not been completely opened, Gaza suddenly finds itself an inseparable part of the internal struggles in the land of the Nile. Gaza’s umbilical cord, which was tied to Israel, has been disconnected for the most part and Gaza has become connected to Egypt, with all that entails.

Hamas is now left with no choice but to once again turn to Israel. Al-Monitor has learned that feelers have been put out in recent days to Dor Alon, an Israeli fuel company which was the sole licensee of gas supplies to the gasoline and power stations in Gaza. Previously in the past year, Dor Alon supplied fuel to Gaza, despite Hamas’ unilateral decision to sever ties with Israel, because even then, following the terror attack from Sinai, the tunnels were sealed off, fuel did not get through and there was real concern about a humanitarian crisis developing in Gaza.

As we’ve already said, Middle East politics never ceases to amaze and now, for the second time in about a year, Israel might end up playing the role of “savior” where the Muslim Brotherhood proved a disappointment.

Either way, on June 30, when those disappointed with the Muslim Brotherhood hold their big rally in Cairo, Gaza’s residents will be keeping their fingers crossed for them.