Though Hamas downplays the effects on Gaza of the unrest in Egypt and the closure of the Rafah crossing, economists worry that conditions in the Strip are about to reach a new low. 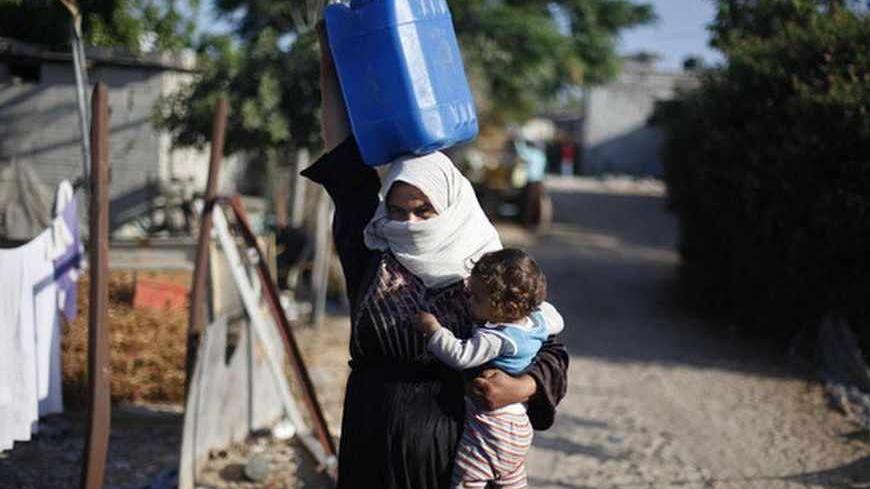 A Palestinian woman carries her daughter as she makes her way to fill a container with water from a nearby tank in Khan Younis in the southern Gaza Strip, June 20, 2013. - REUTERS/Ibraheem Abu Mustafa

Palestinians in the Gaza Strip are closely following the events unfolding in neighboring Egypt as the conflict which has engulfed the country since June 30 continues between supporters and opponents of the country's ousted president, Mohammed Morsi.

The unrest in Egypt has clearly and seriously impacted the Hamas-ruled Gaza Strip, a territory both historically and geographically bound to Egypt.

The closure of the Rafah crossing and the smuggling tunnels along the border with Egypt, which constitute a vital lifeline for the Palestinians in Gaza, have once again plunged Gaza into dire economic straits engendered by a fuel crisis, sharp oil and food shortages and an almost complete ban on construction material entering the coastal enclave.

As they have run out of fuel, most of Gaza’s gas stations have stopped service while a few of them are selling Israeli fuel, a costly alternative with prices nearly double those of Egyptian fuel.

Asmaa al-Ghoul reported for Al-Monitor: "The Egyptian crisis had a huge influence on the entry of gas from tunnels and halted the motion of 30% of cars in the Gaza Strip. If this were to go on for another week, the streets would be half empty.”

However, Gaza’s Ministry of Economy Alaa al-Deen Al-Rafati told Al-Monitor that he does not expect the current crisis to last long. “It will be only a matter of time before things go back to normal in Gaza,” he said.

Although the quantity of goods that enter Gaza via the Rafah crossing has greatly diminished since the June 30 demonstrations in Egypt, Palestinians in Gaza should not be hugely concerned, Rafati explained.

“This is not the first economic crisis we have faced in Gaza,” he told Al-Monitor. “The Rafah crossing and smuggling tunnels were also closed at almost this time last year due to the killing of several Egyptian soldiers. It was closed again during Israel’s latest aggression on Gaza last November, but we have been able to get together and find our way through such crises.”

Gaza’s economics minister stressed that the government in Gaza is in direct contact with its Egyptian counterparts in order to keep the Rafah crossing open and ensure the flow of goods into the Gaza Strip.

While Rafati sought to downplay the current crisis, Samir Abu Mdallalah, head of the economics department at Gaza’s Al-Azhar University, was less optimistic.

Speaking to Al-Monitor, Abu Mdallalah said that recent events in Cairo will bear upon the overall economic situation in Gaza, particularly if Egyptian authorities continue to shut down the tunnels along the border with Egypt.

Foreseeing a grim scenario, he said the economic situation is likely to deteriorate to a point reminiscent of that reached in 2008 at the height of the blockade as a highly tightened embargo was enforced by Israel and Egypt under former president Hosni Mubarak.

“This could engender a real crisis with rising prices, a complete halt to construction projects and severe oil and gas shortages. If the current situation persists, inflation could potentially rise to around 30%,” Abu Mdallalah warned.

Since June 2007, when Hamas seized control of Gaza, Israel has imposed a tight blockade on the Strip, closing all border crossing and restricting the quantity of food and goods allowed in. The Israeli human rights organization Gisha said, "The official goal of the policy was to wage 'economic warfare' which would paralyze Gaza's economy and, according to the Defense Ministry, create pressure on the Hamas government."

Abu Mdallalah pointed out: “In light of the tightened Egyptian restrictions, if Israel doesn’t ease restrictions on the movement of individuals and goods, the situation is likely to deteriorate into a serious humanitarian crisis. We can already see this happening with the fuel crisis, the ban on construction material and the decreasing quantity of goods and food.”

By the same token, Mouin Rajab, a Gaza-based economist, said that the continued unrest in Egypt has worsened an already existing economic crisis in the Gaza Strip.

Different sectors, said Rajab, have been harmed to varying degrees by the worsening economic conditions resulting from the closure of the Rafah crossing and primarily from the Israeli-imposed embargo.

“The economic situation is generally extremely dire. This is to say, under normal circumstances — which are far from 'normal' — it is a terrible situation,” Rajab told Al-Monitor.

“However, it has even worsened over the past two weeks due to the events going on in Egypt and their impact on Gaza represented in the closure of border crossings with Egypt. For example, this has resulted in a complete paralysis in the construction sector due to the ban on construction material from entering Gaza. Another example is the severe shortage of fuel. This, meanwhile, has considerably increased levels of unemployment,” he tersely explained.

Around 80% of Gaza’s families lack a stable source of income and are dependent on humanitarian aid and food coupons for their daily subsistence and, according to the Palestinian Central Bureau for Statistics, around 39% of people in Gaza live below the poverty line.

Similarly, Abu Mdallalah argued that unemployment levels have recently risen and will continue to rise even more if the crisis persists. He clarified, “The closure of the tunnels has increased levels of unemployment among Gaza residents. For instance, the level of unemployment in Rafah has decreased by 20% in recent years due to ongoing business resulting from working tunnels. Now with their closure, unemployment and poverty levels will rise.”

Discussing a possible solution to the current crisis, Abu Mdallalah said that rather than thinking of short-term and temporary solutions, the Palestinians need to address the root causes of the problem.

Israel, as an occupying power, is responsible for the welfare of Gaza’s civilian population and therefore should lift its siege on Gaza, he said, adding, “The Palestinians shouldn’t bet their future on regional changes and alliances taking place; otherwise, they will always be susceptible to these changes. The solution lies not only in the reopening of the Rafah crossing but also in lifting the Israeli-imposed blockade on Gaza. Therefore, the Palestinians need to get their act together on how to hold Israel responsible for the problem in Gaza.”