The worsening security conditions in the Sinai and crackdowns on either side of the Egypt-Gaza border have made life worse on both sides. 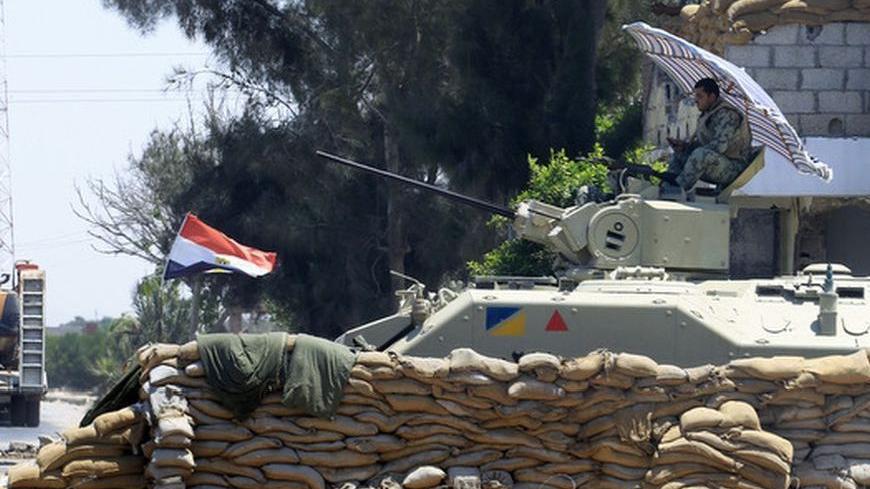 RAFAH, Sinai — Every few days, an armored vehicle rolls past the entrance to Abou Yasser’s clothing shop in this city that straddles the border between Gaza and Egypt’s Sinai Peninsula, the police and military unaware of how he really makes a living.

For the past three years, Abou Yasser has moved diapers and milk through an underground tunnel into Gaza. Recently, however, his smuggling business has been hurt by Egyptian military efforts to restore security in the peninsula and quell terrorist threats — affecting business for Sinai smugglers while Gaza residents face greater shortages of food and supplies.

“Before the operation, my tunnel was open all the time. Now it is only open two days a week,” said Abou Yasser, whose tunnel operates only on weekends, when he says security in the area is scarce.

Sinai residents were offered few economic opportunities under now-deposed Egyptian president Hosni Mubarak, and many in the northern part of the peninsula turned to illegal arms trade or smuggling goods. Roughly 1,200 tunnels link Sinai to Gaza, although only several hundred are currently working, locals say.

“If I could find other work instead of this tunnel, I would not work in this field,” said Abou Ayad, whose tunnel employs 45 people. He smuggles flour, tuna, Pepsi, metal and steel through a tunnel he’s owned since the beginning of the Egyptian uprising against Hosni Mubarak in 2011, a revolution that led to a security vacuum in the Sinai.

Over the past 20 months, the lawless peninsula has been a base for violent attacks on Egyptian security posts and targets in neighboring Israel. An unfettered tunnel trade allows militants to reach Sinai underground. Weapons from Sudan and Libya also saturate the volatile region.

Prompted to act following the deadly Aug. 5 attack that killed 16 border guards, which Egypt suspects involved militants entering Sinai beneath the border, Egyptian security destroyed dozens of tunnels and increased its presence along the nation’s Sinai perimeter and at checkpoints in the northern peninsula.

Facing heightened risks, Abou Ayad charges double what he used to for each ton of cement smuggled through his tunnel, now operating only under the cover of night. He is anxious about what will become of his neighbors if all tunnels are destroyed.

“If they close our tunnels, all of the Gaza Strip will be besieged,” Abou Ayad said.

The tunnel industry is considered one of the biggest businesses in the Gaza Strip. According to the Gaza-based think tank Pal-Think for Strategic Studies, it creates around 25,000 jobs in Gaza, which suffers from 45% unemployment. The industry allows a large amount of goods, from food to construction supplies, to flow into the strip.

“We receive only 25% of Gaza’s needs via the Israeli borders, while the rest comes through the tunnels," said Gaza’s Economic Minister Alaa Al-Deen Al-Rafati. The underground supply routes grew after Hamas took control of Gaza in 2007 and Israel and Egypt increased border restrictions that contributed to worsened economic conditions.

Because Gaza relies so heavily on the tunnel trade, Egypt’s recent crackdown led to a 30% drop in food imports by mid-October, Al-Rafati said, and the price of other imports has been on the rise.

“The Palestinian economy is facing many problems due to obstacles in importing or exporting goods,” Al-Rafati said.

Pal-Think economist Omar Shaban said the main shortage is fuel. North Sinai residents said security forces destroyed tunnels that transport gravel, used in Gaza for construction. Moreover, many tunnel owners in Gaza lost large amounts of money after Egyptian security cracked down on the underground trade, and some lost their only means of income.

"I used to make 40 shekels [$10] a day for transporting different kinds of goods from the Egyptian side to the Palestinian one, which is considered rather dangerous,” said Abd Al Rahman, a young tunnel worker. “However, I have no other option because I have to make a living. I now make nothing at all after many of the tunnels were destroyed over the past two months."

Seeking to deepen his ties with Hamas, on a visit last month, Qatar Sheikh Hamad bin Khalifa pledged $400 million to Gaza — equal to more than half of the budget of the Hamas government.

The donation will finance five main projects, including a $90 million initiative to provide 3,000 housing units to locals as well as support to the poor. Other projects include building a hospital for the disabled and improving transportation infrastructure in the form of three main arteries.

Locals said the project would have a positive impact on Gaza.

"For sure, these projects will create jobs and pump life into the economy," said Adnan Al Ifrangi, a government employee.

Some analysts said it was a temporary fix.

"The donation mainly focuses on the construction field and will create jobs for the people in Gaza, at least for the next three years or so," said Reham Al Wehedi, an economics researcher and consultant in Gaza. "Unless there are other projects, those workers might not find other jobs after the end of the project."

And there is still concern over how materials needed for the projects will get to Gaza.

At the same time, on both sides of the Egypt-Gaza border, the crackdown is breeding some resentment toward Egypt’s new Islamist-led government and President Mohammed Morsi.

"We thought Mubarak's days were bad when it came to permitting goods and fuel to enter the Gaza Strip, but these days are much worse," said a Gaza tunnel owner in Rafah.

After the August attack, Hamas closed tunnels to prevent movement of militants between Sinai and Gaza, locals said. The Palestinian group said it was prepared to close all tunnels if Egypt would agree to a free-trade zone that would allow for the legal flow of goods between Gaza and Egypt. Morsi’s office, however, dismissed the possibility, Egyptian press reported.

That has left bitterness in an already unstable Sinai.

“Mubarak [was] better than Morsi,” said Abou Ayad, standing in the Sinai desert.

Sarah Lynch is a American journalist based in Cairo who works in print and video.

Naser Najjar is a Palestinian print journalist based in Gaza City.