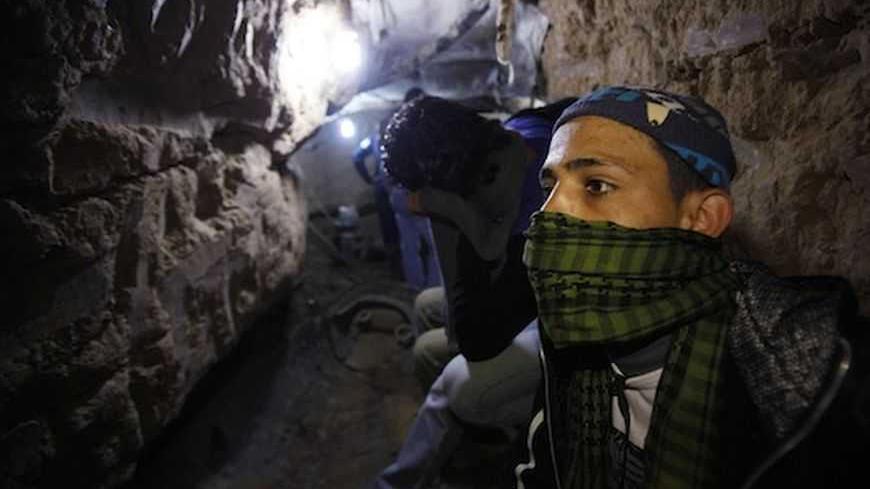 A Palestinian works inside a smuggling tunnel flooded by Egyptian forces, beneath the Egyptian-Gaza border in Rafah, in the southern Gaza Strip, Feb. 19, 2013. - REUTERS/Ibraheem Abu Mustafa

Business was quiet at the smuggling tunnels in the al-Salam neighborhood, which straddles Gaza’s border with Egypt, unlike other border areas where bulldozers and young workers loaded construction materials and food products onto trucks.

For two weeks, Egyptian security forces have been flooding dozens of tunnels in al-Salam with waste water. Palestinians fear this will turn into a systematic crackdown that will continue in other neighborhoods and paralyze the tunnel business.

Abu Ahmed, 31, who worked as laborer before turning to smuggling, said that the tunnel where he works was pumped with waste water from the Egyptian side two weeks ago.

Abu Ahmed works as a shift supervisor for a gravel tunnel, where he supervises 18 employees who pull out the gravel in baskets and pile them in a deep, wide hole next to the tunnel's exit shaft. A bulldozer later loads the stones onto trucks.

“Although we managed to pull the water out the tunnel, the tunnels are still wet and smelly. Workers can’t go inside yet, which definitely affects the amount we bring [into Gaza], which has been reduced to half,” Abu Ahmad explained.

Over the past six years, hundreds of underground passageways that snake under the Egypt-Gaza border have been an economic lifeline for more than 1.7 million Palestinians after Israel imposed a siege on the coastal enclave.

Under Hosni Mubarak, Egypt stood firmly behind Israel’s siege on Gaza, and made several attempts to damage the tunnels. But with the Muslim Brotherhood assuming power in Cairo, its offshoot in Hamas expected greater support from Egypt, and were thus surprised by the decision to flood the tunnels.

While various accounts of Hamas’ response surfaced in the media, offering contradictory statements, Taher Al-Nono, a spokesman for Hamas, told Al-Monitor that the government had no official comment on the tunnels issue.

Islam Shahwan, spokesman for Gaza’s Ministry of Interior, told Al-Monitor that calls had been made to the Egyptian side, and that they had received no confirmation that the tunnels would be closed.

“For us, using tunnels for importing is an emergency case as we have no other options. If we manage to lift the siege, we will get rid of them (the tunnels) by choice,” Shahwan said.

Speaking to Egypt’s Bawabat Al-Ahram newspaper, Ahmed Ali, a spokesman for the Egyptian army, confirmed that Egypt’s armed forces aimed to damage all tunnels on the Sinai-Gaza border for security reasons.

Ali said that maintaining security in Egypt does not contradict supporting the Palestinian cause, and the flooding of the tunnels should not upset supporters of Palestine.

“Gaza has its legitimate crosspoints such as Rafah and Kerem Shalom, where it can import and export goods. Therefore, remarks about Egypt supporting the siege over Gaza need to be reconsidered,” Ali said.

Despite the immediate repercussions for ordinary Palestinians in Gaza, closing the tunnels might push forward the slow Palestinian national reconciliation process between Fatah and Hamas, as they will have to form a united authority on its borders.

While Egypt’s decision is understandable, the timing of it is surprising, says Gaza-based political analyst Talal Okal.

“Besides being under Israeli and American pressure to stop weapons smuggling to Gaza, Egypt needs a legitimate border authority to deal with,” Okal explained.

Okal said that destroying the tunnels would not hinder relations between the Islamists in Egypt and Gaza, since it was Egypt’s intelligence that moved to close the tunnels, not the Muslim Brotherhood-led government.

“Hamas is not interested in losing Muslim Brotherhood in Egypt for any reason. Rather, it’s interested in pushing the Islamic experience in Egypt towards success,” he said.

Another smuggler, Abu Farah, 26, noted that Egyptian forces also target trucks bringing goods from Sinai before they reach tunnel openings on the Egyptian side of the border. Such measures have been ongoing for several weeks, with the supply of gravel dropping from 180 tons of gravel a few weeks ago to only 100 to 120 tons at present, Abu Farah noted.

Abu Ahmad says he has no love for his job as a smuggler, and would leave it in a heartbeat if other job opportunities were available in the war-torn and besieged Gaza Strip. He says his major concern is that if he walks out on his job, the 18 employees who work for him would also likely lose their jobs.

“The dust of the gravel is killing us every day," he says. "It’s almost like hard labor, but we can’t leave our only source of income for our families.”

Abeer Ayyoub is a former human-rights researcher turned journalist whose work has appeared in Al Masry Al-Youm, The Daily Mirror, and Haaretz.