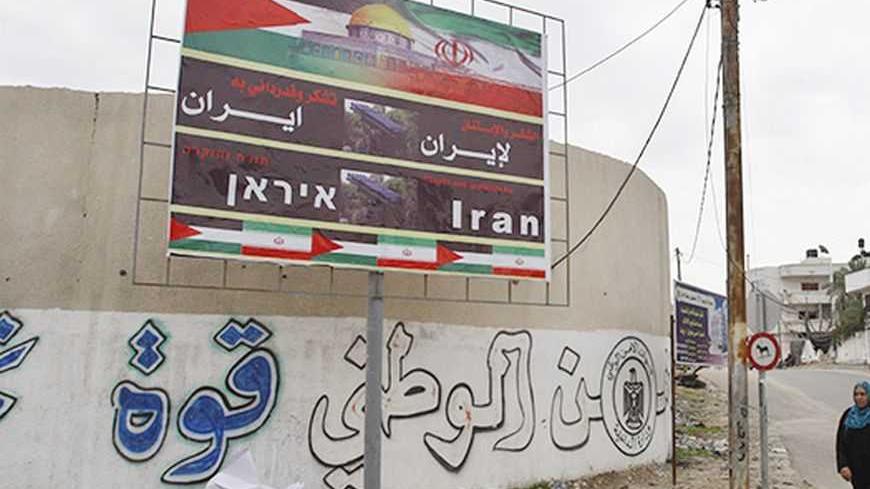 A Palestinian woman walks next to a banner that reads "Thanks and gratitude to Iran" in Gaza City, Gaza, Nov. 27, 2012. - REUTERS/Ahmed Zakot

Out of all the Arab Spring's impacts, the war in Syria is by far the most dramatic. The conflict has reshuffled regional ties, and Palestinian-Syrian relations are among the most affected. Palestinian-Iranian relations have also come under pressure.

Since the Islamic revolution in 1979, Iran has been the main supporter of the Palestinian cause, and in particular of its two largest Islamic factions: Hamas and Islamic Jihad. As part of the alliance, Syria was also a major supporter of the two groups and, until recently, played host to the leadership of both groups.

Iran was a strong supporter of the Hamas government in Gaza and its military wing, until Hamas moved its leadership from Syria, split with Bashar al-Assad’s regime and became a vocal critic of the Syrian crackdown.

Hamas had waited more than a year until it made the difficult decision to leave Syria and sacrifice Iranian support. As an offshoot of Egypt’s Muslim Brotherhood — which has been riding high since the Arab Spring — Hamas now has alternatives to Iran, and is moving out of isolation and towards international acceptance.

However, by contrast, Islamic Jihad — constrained by a lack of allies — has opted to stay officially neutral on the Syrian crisis. Despite Ramadan Shallah, the leader of Islamic Jihad, leaving Syria last year, the movement still insists that its ties with Syria have not been negatively affected and that Shallah’s departure was purely for security reasons.

Senior Islamic Jihad official Khader Habeeb told Al-Monitor that his faction’s relations with foreign powers are based on the support those powers can provide to the Palestinian resistance, and not on external matters. “Iran has adopted the Palestinian resistance since its Islamic revolution. It has been a loyal backer. Consequently, Iranian assistance for the Syrian regime has nothing to do with our relations with Iran, even when our views are different,” Habeeb said.

Habeeb considers the crisis in Syria a purely internal issue that has nothing to do with the Palestinians. “Definitely we are sorry for both Palestinians and Syrians being killed every day in Syria, but we are already aware of the fact we are mere guests in Syria and have no right to interfere,” he explained.

With Hamas-Iran relations destabilized over Syria, a door has opened for Islamic Jihad to boost its ties with Iran, although its officials won’t openly admit this.

Adnan Abu Amer, political analyst and lecturer at Al-Ummah University is Gaza, said that Iran's ties to Islamic Jihad have strengthened since Hamas took a step back from Tehran.

“Islamic Jihad is the top backed Palestinian faction by Iran. That doesn’t necessarily mean that Islamic Jihad will stand out from the rest, as there are many other factors that count, such as popularity and national support,” Abu Amer clarified.

Growing Iranian support for Islamic Jihad was made evident in the November mini-war with Israel, with the movement demonstrating its long-range rocket and cyber-warfare capabilities.

Habeeb, however, stressed that Iranian support for Islamic Jihad is only limited to the armed wing, and has nothing to do with strains between Hamas and Iran. “Hamas-Iran relations are still okay and our good relations with Iran do not come at the expense of their ties,” Habeeb said. “Iran was pleased with the victory the Palestinian resistance achieved. This is why it’s likely to increase its support for us, for what we have lost during the war and because we need to rebuild our infrastructure.”

Islamic Jihad also maintains strong links with Lebanon’s Hezbollah, despite Hezbollah’s open support for the Syrian regime. “Hezbollah is a strong, armed faction and we are still coordinating with them concerning resistance against the Israeli occupation. That’s what matters to us. Any external conflict is not our issue,” Habeeb said.

Taher al-Nono, spokesman for the Hamas government in Gaza, stressed that the two Islamist factions were not competing over Iranian support. “It’s totally up to Iran to support any of the Palestinian factions with the way it considers,” al-Nono said.

Despite both Hamas and Islamic Jihad sharing a similar opinion of the Syrian crisis, they have each acted according to their own circumstances.

“Hamas has Qatar and Egypt as alternatives, which made its decision easier, while Islamic Jihad has no other geographical alternatives, so it had to stay in Syria and not comment,” Abu Amer told Al-Monitor.

Hamas’ quiet departure from Syria was the most it could do under Iranian pressure, Abu Amer said. He said that Iran preferred that Hamas stay in Syria and take an impartial stance.

Nevertheless, all indicators suggest that Iran is still keen in maintaining relations with Hamas, as a popular resistance movement and a branch of the Muslim Brotherhood, which is now spreading throughout the Arab Spring states.

Al-Nono said that Hamas-Iran relations are ongoing and were not deeply affected by Hamas’ departure from Syria, arguing that the Islamist movement has the right to change the location of its leadership.

“Syria was always a devoted host for both the Hamas leadership and Palestinian refugees, but we preferred not to be part of the ongoing conflict in Syria. However, we respect the Syrian people’s choice.”

Abeer Ayyoub graduated from the Islamic University of Gaza with a degree in English literature. She is a former human rights researcher turned journalist whose work has appeared in Al-Masry Al-Youm, the Daily Mirror and Haaretz.