Hamas has backed down on its decision to ban Fatah from staging an open-square rally in Gaza, Abeer Ayoub reports from Gaza. 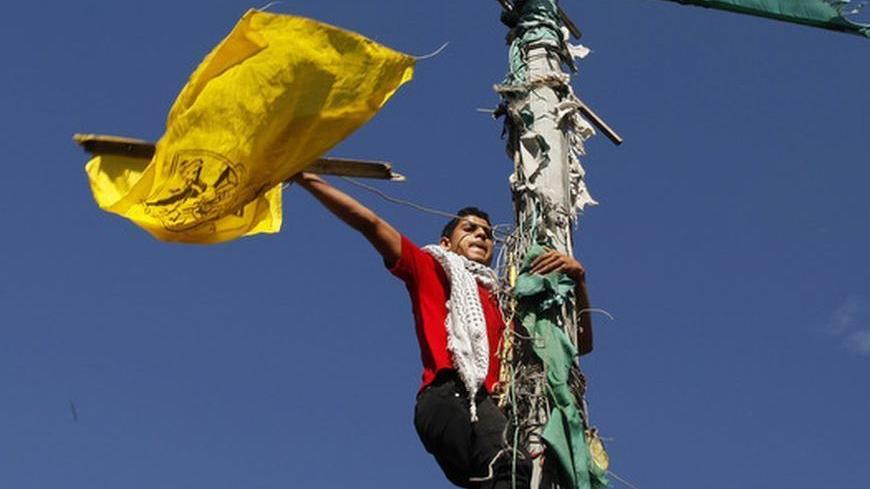 A Palestinian waves a Fatah movement flag during a rally in Gaza City. Nov. 2012 - REUTERS/Suhaib Salem

Hamas on Friday reversed its ban on Fatah from staging an open-square rally to commemorate its anniversary in Gaza.

Nabil Sha’at, a West Bank-based senior Fatah official, announced on Saturday that the celebration will take place on Friday, Jan. 4, at Al-Saraya Square in Gaza. The celebration will be the first for the movement in Gaza since Hamas took over the coastal enclave in 2007.

Taher Al-Nono, a Hamas spokesperson in Gaza, said that an initiative made on Friday by representatives from several Palestinian factions, and direct negotiations between Sha’at and Gaza Prime Minister Ismail Haniya, resulted in a reversal of Hamas’ ban.

The two rival factions had disputed the venue of the celebrations, with Fatah insisting on Al-Kateeba Square, the site of Hamas’ own anniversary festivities a few weeks ago. Hamas had denied Fatah’s request to stage an open-square rally for “security reasons.”

The ban drew strong criticism from Fatah, who warned that the decision would deal a blow to reconciliation efforts, particularly after Fatah allowed Hamas to commemorate its anniversary in several West Bank cities.

The Islamists maintained that security concerns upheld a Hamas ban on Fatah staging the rally at Al-Kateeba Square, but compromised by allocating instead Al-Saraya Square.

“Al-Kateeba square is surrounded by many police stations and we are concerned about the lives of Fatah supporters as well as our own supporters. This is why we rejected it, we want to keep the positive atmosphere of reconciliation we recently have had,” Al-Nono explained.

“Only because we talked to each other directly, we could reach an agreement. This would have never happened through brokered talks or media clashes,” Al-Nono said.

Faisal Abu Shahla, a Fatah lawmaker in Gaza, welcomed Hamas’ reversal after criticizing the ban earlier in the week as “disappointing.”

“It’s such a good step because the previous decision not to commemorate our anniversary would have badly affected the reconciliation route between us,” Abu Shahla told Al-Monitor.

Many in Gaza believe that Hamas’ concern is not security, but rather a fear of a public display of support for Fatah in the Gaza Strip.

Roughly 5,000 Fatah supporters in Gaza are expected to celebrate the movement’s founding, with Hamas representatives expected to attend.

The scheduled event was seen as a key step towards reconciliation efforts between Fatah and Hamas, which have stepped up since Israel’s assault on Gaza last month.

Abeer Ayyoub graduated form the Islamic University of Gaza with a BA in English literature. She is a former human rights researcher turned journalist whose work has appeared in Al Masry Al-Youm, The Daily Mirror, and Haaretz.