The visit to Gaza of Yusuf al-Qaradawi, head of the International Union of Muslim Scholars, won praise from Hamas, but received strong criticism from Fatah, which accused the cleric of undermining Palestinian unity. 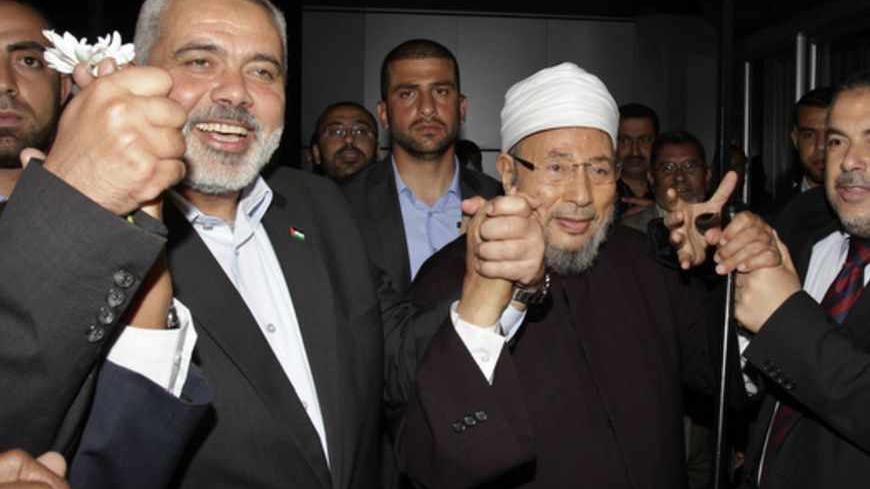 Senior Muslim cleric Yusuf al-Qaradawi has wrapped up his three-day Gaza Strip visit, which has drawn mixed reactions from Palestinian circles. It was the first visit by the head of the International Union of Muslim Scholars to the Hamas-run coastal enclave.

Qaradawi, 86, is Egyptian-born with Qatari citizenship and has become a highly controversial figure in the region since the Arab Spring swept the Middle East in 2011, when he backed protesters against their regimes and even legitimized Western interference.

The visit was one of many recent diplomatic visits to the Gaza Strip and its Islamist government, away from the West Bank and its secular Fatah-run government, that is seen as reinforcing the Palestinian national division.

The cleric made it to Gaza through the Egyptian-Palestinian border's crossing at Rafah with a 50-member delegation from 14 different countries. The delegation was received formally by senior Hamas leaders headed by Prime Minister Ismail Haniyeh, who described Qardawi as the “Arab Spring sheikh” during his speech at Rafah. For his part, Qaradawi insisted on “liberating all of Palestine.”

In a press statement received by email, Hamas welcomed the visit and called it “historical.” Hamas also responded to criticism of the event, saying that the delgates “represent individuals only.”

Meanwhile, Fatah and some other Palestinian left-wing parties boycotted the visit.

From the West Bank, Fatah spokesperson Ahmed Assaf told Al-Monitor that a visit from a divisive person like Qaradawi to Palestine is not welcome, as it strengthens Hamas’ power at the expense of Palestinian unity.

“I just don’t understand it when Qaradawi prohibits visiting the occupied Palestinian territories, and today he’s coming to Gaza with an Israeli permit,” Assaf added.

Earlier last year, Qaradawi issued a fatwa prohibiting non-Palestinian Arabs from visiting the Israeli-occupied Palestinian city of Jerusalem, as it means indirectly recognizing Israel as an occupier. The fatwa was heavily criticized at the time.

The Palestinian leadership saw the fatwa as a blow to its diplomatic efforts to garner support for Jerusalem, and some leaders considered Qaradawi as meddling in Palestinian internal affairs by issuing rulings agreeing with the ideology of Hamas at the expense of Fatah.

However, speaking to Al-Monitor, the Gaza-based Hamas spokesperson Sami Abu Zuhri refuted the claim that Qaradawi got an Israeli permit to enter Gaza, insisting on Hamas being free and able to give its visitors access to the besieged enclave.

Political analyst Talal Okal argues that such high-profile visits to Gaza only are giving more attention to its siege as a cause, rather than promoting the original cause of resistance to the Israeli occupation of Palestine.

“I see the different views toward this visit as totally justified. Qaradawi is a religious man with a clear political agenda. He is known for his good ties to the Muslim Brotherhood, which makes his visit a Hamas-supporting one,” Okal told Al-Monitor.

In October 2012, Emir of Qatar Hamad Bin Khalifa Al-Thani along with his wife made it to Gaza in a visit that clearly showed Hamas reshuffling its cards. Qaradawi’s visit comes as a proof, analysts argue, of Hamas’ political maneuvering in the region.

“Hamas is playing a careful pragmatic role reforming its relations in the region until it stands on a solid base,” Okal said.

Fatah’s Assaf agreed. “Hamas today is standing with Qatar and Qaradawi on one side, with the rest of the Palestinians and free Arabs on the other side.”

In a separate press statement, Hamas said those criticizing Qaradawi’s visit “are rejecting Islam as a part of the struggle against the Zionist enemy.”

The division over Qaradawi’s visit was also reflected on the streets of Gaza.

On the last day of his visit, Qaradawi led the Friday sermon at the historic al-Omari Mosque in the Old City of Gaza, amid high security. Hundreds of Palestinians gathered inside the mosque, with many having to pray outside due to overcrowding.

Bassem Ahmed was listening to the sermon outside the mosque, and said that he also went to al-Kateeba Square in the central Gaza Strip on Thursday to see Qaradawi.

“He’s such a respectful and religious man. I appreciate his visit under these hard circumstances Israel is imposing on us,” said Ahmed.

But Abu Said Haniyeh disagreed with Ahmed, expressing doubt over Qaradawi's intentions with the visit.

“This is an American-affiliated man; he never did anything good for us. I’m sure he’s sent with a peace message for both Hamas and Israel.”

Abeer Ayyoub graduated from the Islamic University of Gaza with a  BA in English literature. She is a former human rights researcher turned journalist whose work has appeared in Al Masry Al-Youm, Al Jazeera and Haaretz. On Twitter: @Abeerayyoub