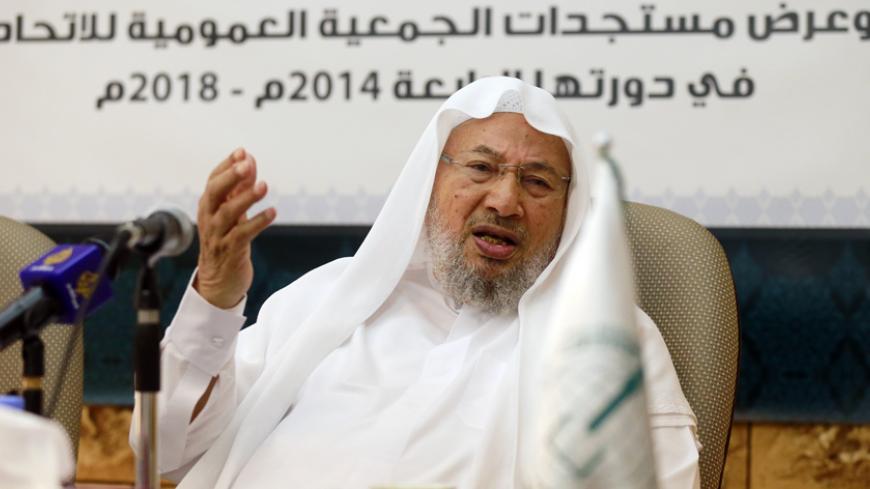 Turkish President Recep Tayyip Erdogan was angered when Interpol issued an arrest warrant Dec. 5 for Yusuf al-Qaradawi, the ideological leader of the Muslim Brotherhood. Expressing his resentment publicly at the Fifth Religious Council in Ankara Dec. 8, Erdogan said: “Look, a person who came to power through a coup is giving instructions to Interpol. Based on this instruction a step is being taken for the arrest of Youssef al-Qaradawi, president of the [International] Union of Muslim Scholars. What kind of a business is this?”

In July, an Egyptian news report of unknown reliability wrote that Qaradawi had ruled that a declaration of a caliphate by the Islamic State of Iraq and the Levant is “void under Sharia,” but that he declared Turkey to be the capital of the caliphate.

In June 2013, Qaradawi released a written statement in response to the Gezi Park protests and called on everyone to support Erdogan against foreign conspiracies. He said the opposition protesting in Taksim Square is a minority and they should respect the opinion of the majority and refrain from destructive behavior. Qaradawi also stressed that Erdogan’s success was because of the help of Allah, because by prohibiting the use of alcohol Erdogan stopped moral corruption and destruction of society.

Qaradawi is also known for his passionate hatred of Israel. He permitted the use of suicide bombings in one his fatwas in the 1990s as a defensive tactic against Israel. Since then, he never retracted from that position. In April 2004, Qaradawi issued a fatwa declaring a Muslim boycott of US- and Israeli-made products. “To buy their goods is to support tyranny, oppression and aggression,” he wrote. “Buying goods from them will strengthen them; our duty is to make them as weak as we can.”

In May 2004, Qaradawi said, “There is no dialogue between us [Muslims and Jews] except by the sword and the rifle.” In 2005, Qaradawi issued a fatwa permitting the killing of Jewish fetuses, on the logic that when Jews grow up they might join the Israeli military.

Although Qaradawi argues that he never incited terror and killed anyone, his Friday sermons since the Arab revolts began in 2011 have received even more mixed reactions. Hassan Hassan, a columnist with the United Arab Emirates' National wrote in January: “He has used the mosque largely to air his divisive views. Perhaps his most dangerous fatwa recently was when he called on all Muslims to head to Syria to join the jihad against the regime. Some of those who responded to his call are now killing the Syrians he wanted to help.”

At the German Marshall Fund conference in Naples, Italy, Dec. 3-5, a concern was also raised that there are times where Erdogan’s narrative sounds similar to those narratives coming from the radical Islamists in Iraq and Syria. It was also expressed that such narrative bring into question the strength and the common values of the alliance with Turkey.

Turkey has come under the international spotlight since the war in Syria began for allowing its border to be used by radical Islamists to bring down the Bashar al-Assad regime.

Erdogan made it a habit to slam and belittle the current Egyptian government, in particular Abdel Fattah al-Sisi, the new president and former head of Egypt's armed forces. As prime minister in June 2013, Erdogan defined the ouster of former Islamist President Mohammed Morsi of the Muslim Brotherhood as a “military coup.” Turkey withdrew its ambassador in Cairo in protest of this development, and Egypt followed suit. Since then, Egyptian-Turkish relations, once strong, remain broken.

“Turkey’s relationship with the current Egyptian government is nothing but ‘enemy brotherhood,’ as Erdogan had preferred to call the 'Muslim Brotherhood' in place. This is an ideological approach,” Hasan Unal, the head of the international relations department at Atilim University told Al-Monitor. “I consider what happened in Egypt as a military intervention.' I also observe that Erdogan disregards what has taken place since that military intervention. Egyptians went to the polls to elect their new president, so Sisi is an elected president. When Morsi was elected, it was only by a slight margin and there were numerous claims of election forgery. The opposition was in disarray and they had boycotted the election then. In sum, the election that brought Morsi into power should also be taken with a grain of salt.”

Egyptians, however, consider Erdogan to be directly interfering in their domestic affairs, and Turkey's opposition party members have expressed concern that religion based on the Muslim Brotherhood ideology will be taught to Turkish children from an early age.

There is word in the Ankara beltway that Erdogan could allow Qaradawi to find a safe refuge in Turkey, despite Interpol's arrest warrant. Turkey has recently allowed entry to a number of Muslim Brotherhood members who were kicked out of Qatar. Qaradawi is an Egyptian-Qatari national based in Doha.

“If Turkey allows Qaradawi into Turkey, this could create some legal ramification and impact Turkey’s cooperation with Interpol in the future. This will have to be taken into account while making such a decision,” Unal said. “However, there is no need to add Erdogan’s remarks about Qaradawi to the list of Turkey's troubles with the European Union and United States. The list is lengthy enough as it is — including how to deal with the threat of radical Islamist groups in Iraq and Syria.”