Egypt is expanding security cooperation with Arab states to hand over Muslim Brotherhood officials, including those exiled in Doha. 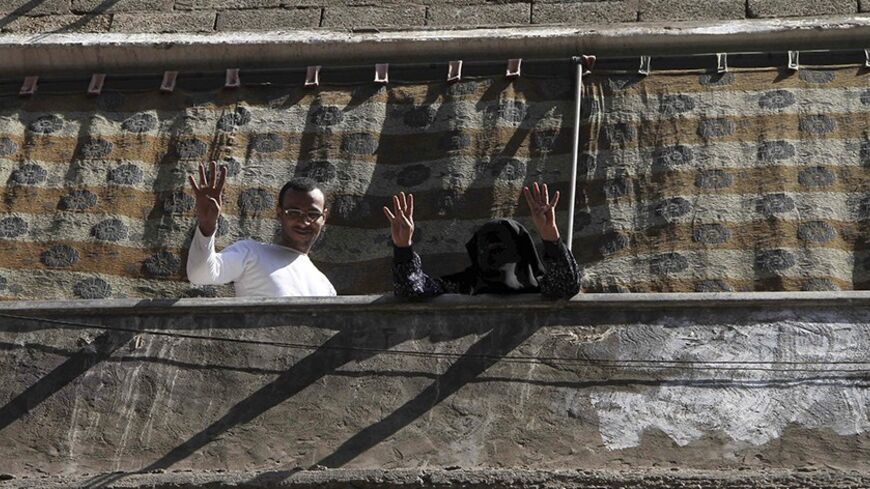 People raise their hands with the sign of Muslim Brotherhood supporters from their balcony in the Matarya area, east of Cairo, March 21, 2014. - REUTERS/Al Youm Al Saabi Newspaper

CAIRO — Egyptian security authorities are coordinating with Arab Gulf countries to track the activities of Muslim Brotherhood members and arrest them on charges of standing behind the violence that has spread throughout Egypt.

Maj. Gen. Sayed Shafiq, assistant interior minister for public security, told Al-Monitor, “We began taking measures to apprehend Muslim Brotherhood members whose hands were tainted with blood and who were involved in acts of violence, whether they be inside or outside Egypt.”

Furthermore, Egyptian security services announced on March 12 that the Egyptian public prosecutor, Hisham Barakat, received a communique indicating the arrest of two Brotherhood leaders, Akram al-Shaer and Mohammed al-Kabouti, in Saudi Arabia and Kuwait. This came as a result of the prosecutor general’s statements and accusations of their involvement in the violent incidents that the country fell victim to after the June 30 revolution.

“There is palpable cooperation by Gulf countries — particularly Saudi Arabia, the United Arab Emirates (UAE) and Kuwait — to hand over Muslim Brotherhood fugitives located on their soil, pursuant to special criminal extradition agreements. It is worth noting that the security forces communicated with six Arab nations, requesting the arrest and extradition of 28 Brotherhood leaders who fled to these states after the events of June 30,” said Shafiq.

Despite the clear support given by Qatar to the Muslim Brotherhood, and its hosting of a great many of their leaders following the events of June 30, Shafiq said Egypt was still seeking fugitives from Qatar. “There are ongoing negotiations, through Interpol and the Egyptian Foreign Ministry, for Qatar to hand over fugitives. Legal procedures will be followed in accordance with international norms to extradite them from any country.”

Mohammed Haridi, the lawyer representing Saudi-jailed Brotherhood leader Akram al-Shaer, asserted in an interview with Al-Monitor that his client was innocent. “Shaer has not been indicted by any court of law, which would warrant him being arrested in a foreign country. Furthermore, he left Egypt prior to June 30, and was therefore not involved in any of the acts of violence that the security agencies have accused him of. The decision to apprehend Shaer and Kabouti is political par excellence, and falls contrary to international conventions and Interpol regulations that require the issuance of court orders prior to the apprehension of any person located in a foreign country,” he said.

Despite confirmation by Egyptian security agencies that legal measures have been taken to apprehend and extradite fugitive members of the Muslim Brotherhood, the list of wanted individuals published on Interpol’s website did not include any of the Muslim Brotherhood names announced by Egypt after June 30. It did, however, include Egyptian persons affiliated with the regime of deposed President Hosni Mubarak, as well as those involved in corruption cases. The list of Egyptians wanted for terrorism only included Ayman al-Zawahri and Saif al-Adel, al-Qaeda’s military commander.

Furthermore, on Dec. 24 of last year, the Egyptian government declared the Muslim Brotherhood a terrorist organization, and notified signatories to the Arab counterterrorism treaty of this decision. The move was followed by diplomatic steps taken by the Egyptian Foreign Ministry to inform Arab nations of the aforementioned decision, for them to implement its content.

In a similar move, Saudi Arabia also declared the Muslim Brotherhood and other such groups to be terrorist organizations. This came in the form of a royal decree issued Feb. 3, requiring the imposition of harsh punishment against those espousing the ideologies of extremist factions, or those providing material or moral support to them. This move was indicative of Saudi support for the Egyptian political administration’s decision to wage war and maintain pressure on the Muslim Brotherhood.

An Egyptian diplomatic source affiliated with the Arab League told Al-Monitor that Cairo would increase pressure on Qatar. “Egypt’s efforts will go beyond the support offered by Saudi Arabia. Steps are being taken to increase pressure on Qatar to reduce its backing of the Muslim Brotherhood. The Egyptian Foreign Ministry’s actions are primarily aimed at putting an end to all forms of backing given to supporters of the Muslim Brotherhood, particularly fugitive members of the organization, through the adoption of a new Arab strategy to combat terrorism.”

Cairo is still betting on the effectiveness of the latest Saudi and Emirati pressure on Qatar, following the former’s decision to withdraw their ambassadors from Doha. The decision pleased Cairo, which succeeded in bringing Gulf states to its side of the fence against Qatar, to put an end to its blatant and open backing of the Muslim Brotherhood.

It would seem that Egyptian-Gulf cooperation in tracking members of the Brotherhood is not new. Egyptian and Emirati security agencies cooperated in uncovering a Brotherhood cell operating in the UAE in January, the members of which were accused of trying to seize power and establish, without a license, a branch of an international organization. As a result, a UAE court ruled on Jan. 23, against 30 individuals, among them 20 Egyptians, ordering that they be imprisoned for terms ranging from three months to five years.

The director of the International Center for Future and Strategic Studies, Maj. Gen. Adel Suleiman, said that Egyptian security and diplomatic attempts to keep track of Brotherhood activities in Gulf countries would lead to nothing new in the fight against the frequent terrorist attacks that have plagued Egypt.

“The positions of Arab countries against the Muslim Brotherhood cannot be relied upon. Regardless of Egyptian diplomatic efforts that were initiated following the government’s first communique proclaiming the Brotherhood a terrorist organization, only Saudi Arabia recognized the decision for political reasons, despite that both the UAE and Bahrain withdrew their ambassadors from Qatar. Extradition treaties only come into effect when criminals have been convicted. Political crimes are not recognized in such cases, and the Egyptian police would be better served to look for the real culprits behind the repeated terrorist attacks,” Suleiman told Al-Monitor.

During its participation in the work of the Arab League summit held in Kuwait on March 25, Egypt focused on the issue of combating terrorism. During the opening of the summit, Egyptian interim President Adly Mansour called for support for Egyptian efforts to confront what he called "terrorism," and requested that presidents of Arab countries activate the Arab Convention on the Suppression of Terrorism, cooperate to extradite wanted persons and not provide any shelter or support to terrorists.