Recent statements by Qatari officials reflect a shift in Doha’s stance toward Egypt, but Cairo is unlikely to take any steps toward reconciliation without approval from the Gulf countries blockading Qatar. 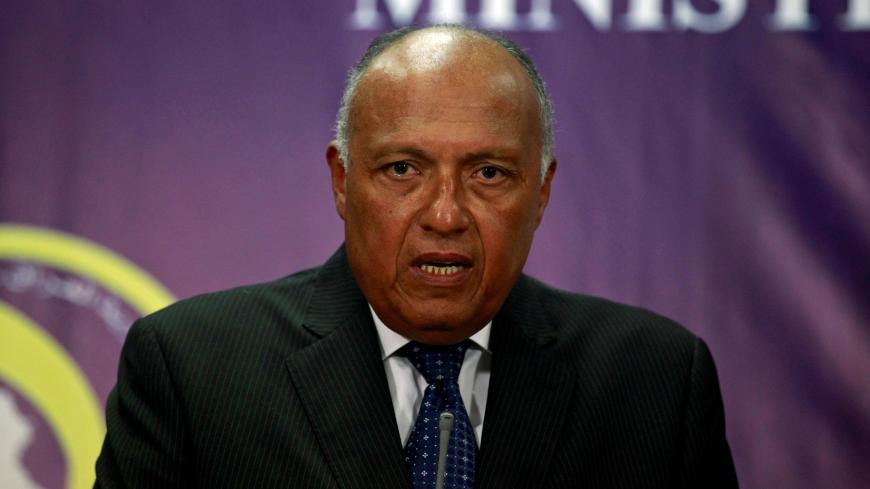 CAIRO — Egypt’s Foreign Minister Sameh Shoukry met Dec. 1 with his Saudi counterpart Adel al-Jubeir on the sidelines of the Euro-Mediterranean Dialogue in Rome. The two leaders discussed the Qatari crisis.

On Nov. 24, Qatari Emir Sheikh Tamim bin Hamad Al Thani sent a condolence message to Egyptian President Abdel Fattah al-Sisi, extending his sympathies for the victims of the terrorist attack that targeted a mosque in northern Sinai. Gunmen attacked a mosque in the Egyptian province on Nov. 24 during Friday prayers, killing over 300 worshippers including 27 children.

Egypt had severed diplomatic ties with Qatar on June 5. Ever since the Egyptian army ousted Muslim-Brotherhood-affiliated President Mohammed Morsi on July 4, 2013, relations between the two countries have been uneasy. Egypt brands the Muslim Brotherhood as a terrorist group. Qatar, on the other hand, gave sanctuary to a number of Brotherhood leaders and refused to acknowledge the legitimacy of Sisi’s presidency.

However, statements made by senior officials now reflect a surprising shift in Qatar’s stance on Egypt. Qatari Defense Minister Khalid al-Attiyah said in a televised statement Nov. 19 that his country recognizes Egypt’s important regional role and that the two countries’ relationship must be solid.

“Every time we tried to bridge the gap with Egypt, a third party interferes to sabotage it on behalf of personal agendas,” Attiyah stated, claiming that the Egyptian media outlets that are “badmouthing Qatar” are paid to do so by an unnamed Gulf state.

Rakha Hassan, a member of the Egyptian Council for Foreign Affairs, believes that Qater's association with the Muslim Brotherhood will remain unchanged.

Hassan told Al-Monitor in a phone interview that Qatar’s recent statements with respect to Egypt are “an attempt to break the ice with Cairo and ease tensions between the two sides.” Hassan noted that Qatar has what amounts to $5 billion in investments in Egypt and that Egypt is looking out for the interests of an Egyptian community that lives in Doha.

Hassan stressed that Egypt is not going to take unilateral action against Qatar, as it is committed to act in accordance with joint decisions by Saudi Arabia, Bahrain and the UAE. The four countries cut ties with Qatar in a coordinated move on June 5, over what they regarded as Doha supporting terrorist and sectarian groups.

Said al-Lawandi, an international relations analyst at Al-Ahram Center for Political and Strategic Studies, said that Qatar has yet to demonstrate its seriousness regarding the demands made by the four states, including Egypt.

The Saudi-led boycotting bloc had demanded Qatar downgrade its diplomatic relations with Iran and cut all military and intelligence cooperation with Tehran, among other demands.

Lawandi believes that Riyadh holds the key to a solution to the Qatari crisis that will come from within the Gulf itself. Egypt will not take any additional measures against Qatar without consulting the other states, he stressed. Lawandi concurred that relations between Egypt and Qatar are not likely to improve in the meantime, as Doha won’t end its support for the Muslim Brotherhood.

Tareq el-Khouly, secretary of the Egyptian parliament’s Foreign Affairs Committee, said that the Qatari officials’ statements are a Qatari attempt to ease the pressure of the four states’ joint position.

In a phone interview with Al-Monitor, Khouly asserted that any action on Egypt’s part will conform to the joint position of the four states, adding that Egypt had supported the Gulf states’ position in 2014.

Back in 2014, Saudi Arabia attempted to boost the relationship between Cairo and Doha following the late Saudi king's petition for Cairo to support the Riyadh agreement, which aimed to enhance cooperation between the Gulf states and Qatar and address disputes with Egypt.

Khouly expressed doubt that the Qatari crisis will see an end at the upcoming Gulf Cooperation Council (GCC) summit, or that Qatari-Egyptian relations would be resumed anytime soon.

The leaders of Saudi Arabia, the UAE and Bahrain skipped the GCC summit held Dec. 5 in Kuwait amid the worst diplomatic crisis yet witnessed in the Gulf. Riyadh, Abu Dhabi and Manama were represented by ministers or deputy prime ministers. The weak level of representation points to the failure of Kuwait’s mediation efforts to end the crisis with Qatar. Meanwhile, the Qatari emir attended the meeting.

On Dec. 4, the UAE and Saudi Arabia announced on the sidelines of the GCC summit the formation of a joint committee to coordinate on economic and military issues. The move is widely seen as undermining the unity of the GCC. It is unclear if any other Gulf state could join the committee.

Khouly believes that the four states’ political stances will remain united, observing that more entities and figures in Qatar were added to terror lists by the four states. Saudi Arabia, Egypt, the United Arab Emirates and Bahrain had announced on Nov. 23 that two entities and 11 figures have been added to the “terror list,” including the International Union for Muslim Scholars, formerly chaired by Qaradawi.

Al-Monitor has yet to receive a comment from the Egyptian Ministry of Foreign Affairs.

Egypt accused Qatar of supporting Muslim Brotherhood leaders who were involved in terrorist acts in Egypt. Meanwhile, Sisi said on July 25, “Egypt will stand by its decision [to maintain the blockade on Qatar] and will not backtrack on this matter.”