Egypt is doubling down on its efforts to convince African countries to take a stance against Qatar, while Sudan decided to take a neutral position over the Gulf crisis. 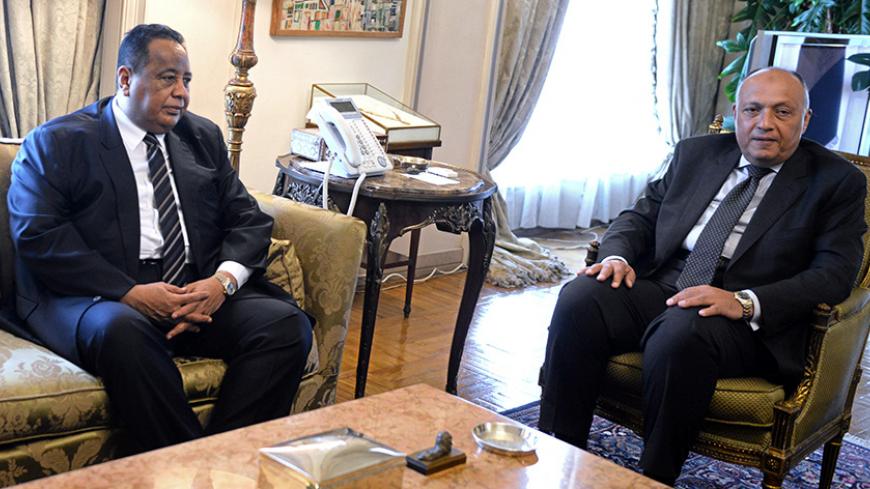 CAIRO — Egyptian President Abdel Fattah al-Sisi started his tour in Africa Aug. 14 and is scheduled to visit four countries, including Chad, Gabon, Rwanda and Tanzania. The visit comes after Cairo failed to persuade the African countries to take a stance against Qatar during the African Summit in Addis Ababa July 4 as part of its efforts to step up its measures against Qatar on the international arena through the United Nations.

Cairo is currently increasing its diplomatic talks in Africa to convince the African states to stand up against Qatar. Egyptian Foreign Minister Sameh Shoukry met with his Algerian counterpart, Abdelkader Messahel, in Cairo Aug. 2, and the two exchanged opinions about the Qatar crisis and discussed the latest developments of the Libyan stalemate. Shoukry then left Cairo on the same day to Khartoum to hold bilateral deliberations with Sudan’s Foreign Minister Ibrahim Ghandour, and the Qatari crisis topped their agenda.

On the sidelines of the African Summit, Shoukry met with several African presidents to persuade them to lean toward Egypt, Saudi Arabia, the UAE and Bahrain by boycotting Qatar. The president of Guinea, Alpha Conde, who is the current head of the African Union, gave the opening speech at the summit in which he called on all African countries to unify their stances on the Gulf crisis and end it peacefully.

Most African countries have strong relations with Qatar and Saudi Arabia, especially Sudan and Eritrea, both of which are part of the Saudi-led coalition against Yemen. The two (Sudan and Eritrea) announced impartiality in the Gulf crisis — a stance that most African states also took. Only a few states like Senegal, Djibouti, Comoros, Mauritania and Gabon backed Saudi Arabia by severing ties with Qatar, withdrawing their ambassadors and reducing diplomatic representation in Qatar.

Media reports indicated that Algeria clashed the most with Egypt in the latter’s attempts to reach an African stance against Qatar during the African Summit. According to the same reports, most African leaders who attended the summit in Ethiopia agreed that the Gulf crisis is a purely Gulf matter that nobody should meddle with.

Shoukry announced during a joint press conference with the Algerian foreign minister on Aug. 2 that in all his meetings he lays out the developments of the Qatari crisis, Egypt’s struggles in fighting terrorism and the importance of the international community addressing terrorism. He noted that he would bring up this issue with transparency during his visit to Sudan on that same day.

Ever since the outbreak of the Gulf crisis, Egyptian media outlets have doubted Sudan’s impartiality. The doubts multiplied after Sudan reacted to Al Jazeera's complaint about the statements of Sudanese Minister of Information Ahmed Bilal Osman on July 12. Osman had said that the channel wants to topple the regime in Egypt. In the wake of the statements, the Sudanese parliament summoned Osman for questioning and asked him to officially apologize to the channel.

Hani Raslan, the head of the Sudan and Nile Basin Studies Unit at Al-Ahram Center for Political and Strategic Studies, told Al-Monitor that he views Sudan’s claim of neutrality on the Qatari crisis as "fake.” He argued that Khartoum puts forward this appearance to maximize its gains from all parties, while maintaining Saudi Arabia’s support to lift the sanctions imposed on Sudanese President Omar al-Bashir’s regime.

He added, “Many signs prove that Sudan is on Qatar’s side in the crisis. Why else would the Sudanese parliament and regime react as they did to Osman’s statements that aimed at warming up to Egypt, and force him to apologize and embarrass himself by denying these statements, recorded as they were?”

Raslan added that Bashir did not attend the Nile Basin States Summit that was held June 22 following the decision to boycott Qatar to settle the points of dispute in the Entebbe Agreement. He noted that Bashir’s absence perfectly fits into the puzzle of the Sudanese stance that is using water as a political pressure card on Egypt on the one hand and as support for its own strategy in allying with Ethiopia, Qatar and Turkey on the other.

Raslan argued that “although Sudan objected to the Entebbe Agreement in 2010, it does not want to be on the same team as Egypt to solve the [current Nile] crisis.”

In 2010, Egypt and Sudan took a unified stance by opposing the Entebbe Agreement signed between six of the Nile Basin countries in 2010. The agreement does not acknowledge the historical quotas of Sudan and Egypt in the Nile waters, as per the 1929 and 1959 agreements, and it does not bind the upstream countries to prior notification of downstream countries when building dams to lock in and store water that naturally flows from the river.

Tarek el-Khouly, the secretary of the foreign affairs committee in the Egyptian parliament, told Al-Monitor, “The Sudanese regime is clearly implicated in a deal with Qatar. It is unlikely that Sudan will play a supportive role of Egypt and the Gulf countries in Africa to escalate measures against Qatar.”

Khouly explained, “It seems Qatari financial support is behind each crisis that Sudan stirs with Egypt. Qatar supports Bashir’s regime in escalating crises between Sudan and Egypt, such as the Halayeb Shalatin crisis, the inaccurate accusations that Cairo supports Sudanese secessionists and Khartoum’s recent opposing opinion to Cairo’s in the negotiations of the Nile Basin crises.”

Khouly added that Qatar is supporting Ethiopia in building the Renaissance Dam, and in return, Sudan is taking unjustified stances against Egypt on the Nile water issue.

The Arab nations that cut ties with Doha claim they have proof of Qatar’s involvement in supporting terrorism — a claim Doha denies — and Khouly argues Bashir’s regime does not sing a much different tune. “Didn’t Bashir’s regime welcome al-Qaeda’s leaders in the past, and isn’t it supporting Muslim Brotherhood figures?” he added.

Khouly concluded by saying, “It is time to exercise hard diplomacy on Sudan.”

Sudanese political analyst and writer Abdul Wahed Ibrahim told Al-Monitor, “Qatar and Bashir’s regime go way back, and they are connected through the Muslim Brotherhood.” He noted that Sudan’s real stance regarding the Qatari crisis was reflected in the internal opinions of the Popular Congress Party and the Just Peace Forum party, which Bashir’s uncle spearheads. The two parties called for backing Qatar in its brawl with the Gulf.

Ibrahim said, “The Sudanese media have taken it too far in tarnishing Egypt’s image because Egypt has not been firm in its stance against Bashir’s regime.”

For his part, Khouly’s belief for the need to use hard diplomacy with Sudan introduced a new notion for Egyptian-Sudanese relations. However, Egypt's diplomats are still trying their best to win Sudan over in the Qatari crisis and in Nile Basin negotiations, despite the rising tensions between both countries.

Cairo has been careful to avoid escalating its official rhetoric against Sudan despite the rising tensions with Bashir’s regime. This is not only to ensure good neighborly ties and fulfill its regional economic integration program, but also to ensure that Sudan does not become an enemy, even if the two do not see eye to eye in the Arab region and Africa.