Egypt and Germany have recently signed a cooperation agreement to fight illegal immigration to Europe, with Cairo hoping such a deal would garner European support regarding its dispute with Ethiopia over the Renaissance Dam. 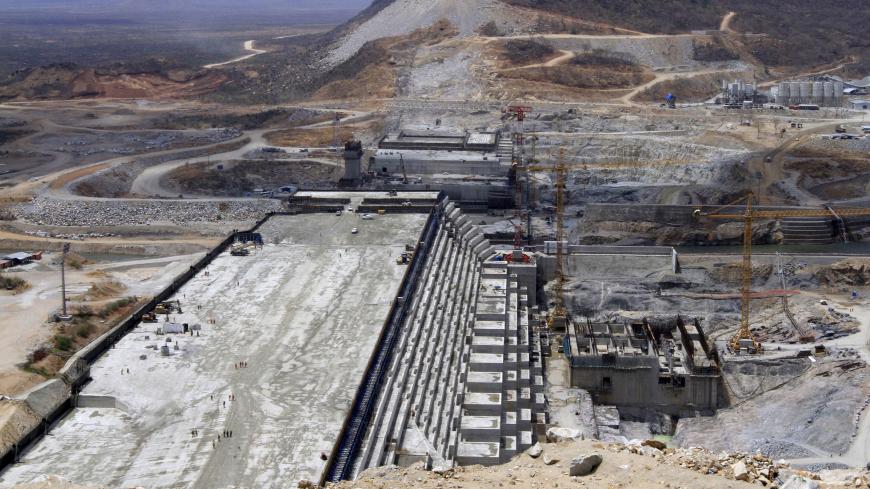 A general view of Ethiopia's Grand Renaissance Dam, as it undergoes construction, is seen during a media tour along the Nile in Benishangul-Gumuz region, Guba, Ethiopia, March 31, 2015. - REUTER/Tiksa Negeri

CAIRO — Egyptian Foreign Minister Sameh Shoukry announced Aug. 27 during a press conference in Berlin with his German counterpart Sigmar Gabriel that Egypt had signed a cooperation agreement with Germany to combat and prevent illegal immigration.

During the conference, Shoukry said that Egypt expects Germany to actively support it to overcome the challenges to this effect, adding that he and Gabriel touched upon the German and European Union stances vis-a-vis the issue of the Nile waters.

Gabriel expressed great understanding of the Egyptian position, noting that the “Nile is the heart of Egypt and this issue is existential for the country.” He stressed that his country is ready to mediate between the Nile Basin countries.

There is an ongoing disagreement between Egypt and Sudan on the one hand and Ethiopia on the other, since the latter has started to build the Renaissance Dam for clean energy generation. Egypt and Sudan are opposed to the technical studies related to the dam, as they believe the dam would affect the river’s water shares of each country.

Meanwhile, the Egyptian Foreign Ministry said in a statement Aug. 28 that Germany will provide Egypt with financial support — without specifying the amount or timing of such aid — to boost its capabilities in securing its borders and combating illegal immigration.

According to the latest statistics published by the United Nations High Commissioner for Refugees for 2016, more than 3,600 refugees and migrants have died in the Mediterranean Sea while attempting to escape from the Egyptian coast to the shores of Europe.

Nayla Gabr, the head of the National Coordination Committee to Combat and Prevent Illegal Migration in parliament, told Al-Monitor in a phone call that the “cooperation agreement between Egypt and Germany included items and terms on how to deal with the refugee crisis and illegal immigration.” She said that both sides will later hold a meeting to implement such terms and translate them into actions on the ground.

Gabr added that the committee will allocate part of the German aid toward information and awareness campaigns on illegal immigration and to introduce young people who wish to leave the country to different alternatives. She further stressed that the agreement focused on securing and managing the border as well as finding development solutions through the establishment of technical training centers for Egyptian youth and the creation of a healthy environment for refugees residing in Egypt.

Ayman Shabanah, a political science professor at Cairo University and the deputy director of the Nile Basin Study Center at the university, said that Egypt is a key partner in the issue of illegal immigration and the refugee crisis, as it is a transit country for the displaced coming from countries of armed conflicts, be it Libya or Syria, or even some African countries suffering from recession.

Shabanah told Al-Monitor, “Clarifying Egypt’s vision for the EU countries will contribute to the convergence of views, especially since the operating company working on the [construction of the Renaissance] dam is an Italian company.”

He added, “Germany has common and direct interests with Egypt, mainly when it comes to working on limiting illegal immigration and alleviating the refugee crisis. Egypt, on the other hand, is working on consolidating its position with the Germans during the negotiations with the Ethiopians, while employing more efforts to limit illegal immigration."

In a similar vein, Rakha Hassan, a member of the Egyptian Council for Foreign Affairs, told Al-Monitor in a telephone interview that Egypt is acting at the international and regional levels to pressure Ethiopia to keep the construction of the Renaissance Dam from affecting Egypt’s minimum share of the Nile waters. “Cairo resorted to Europe in light of the continued disputes with the Nile Basin countries over the Entebbe Agreement,” Hassan said.

The Nile Basin countries — which include Ethiopia, Kenya, Uganda, Rwanda and Tanzania — signed the Entebbe Agreement in 2010 to request an additional share of Nile water. The upstream countries — Egypt and Sudan — are opposing this agreement since it puts an end to their so-called historical shares in the Nile waters of 55.5 billion cubic meters for Egypt and 18.5 billion cubic meters for Sudan.

Mustafa al-Gundi, the head of the parliamentary African Affairs Committee, said, “The EU cares about the stability of the situation in Africa, and the absence of confrontation or disruption of relations between Egypt and Ethiopia is in Europe’s best interest.”

Gundi told Al-Monitor that Egypt insists on using diplomatic means to resolve the Renaissance Dam crisis. “This is evidenced by the last visit by President Abdel Fattah al-Sisi to the African continent,” he said.

Sisi had visited four African countries starting Aug. 14, including Tanzania, Rwanda, Gabon and Chad. Gundi noted that Egypt may take several steps to deal with the Renaissance Dam crisis. “All options are open and available to protect Egypt's water rights. We will not allow the dam to become a de facto matter without a clear agreement on Egypt's water rights,” Gundi said.

He recalled the recent diplomatic measures and procedures that Sisi adopted at the Egyptian Foreign Ministry on June 2. These included the appointment of the acting head of the General Intelligence Service, Maj. Gen. Tarek Sallam, as Egypt's ambassador to Uganda and the appointment of Mohamed Idris, Egypt's former ambassador to Ethiopia and the African Union and assistant foreign minister for African Affairs, as Egypt's envoy to the UN in New York.

The appointment of the No. 2 man in the intelligence services as Egypt’s ambassador to Uganda reflects the expansion of the role of the intelligence services at the expense of the Foreign Affairs Ministry in dealing with the Nile water issue. Similarly, the appointment of the assistant foreign minister for African Affairs as Egypt’s envoy to the UN reflects the major importance of the Nile water issue for Egypt in the coming period.

“This clearly indicates that preparations are underway to deal more rigorously with the Renaissance Dam crisis,” Gundi said.

The Renaissance Dam is one of the biggest challenges facing Sisi since he took office. Indeed, Sisi came to power against a charged political background between Cairo and Addis Ababa following the broadcast of a meeting on June 4, 2013, which included hints of using force against Ethiopia under President Mohammed Morsi. The Egyptian presidency later apologized.

Sisi signed a tripartite joint cooperation agreement in Khartoum on March 23, 2015, between Egypt, Sudan and Ethiopia. The three countries held 14 rounds of consultation on resolving disputes over the Renaissance Dam, the latest of which was on May 16.

But all of these rounds failed. Egypt now hopes to pull the Europeans to its side regarding the Renaissance Dam to pressure Ethiopia during the negotiations, in a last attempt before resorting to more escalating options such as protesting before the Security Council.