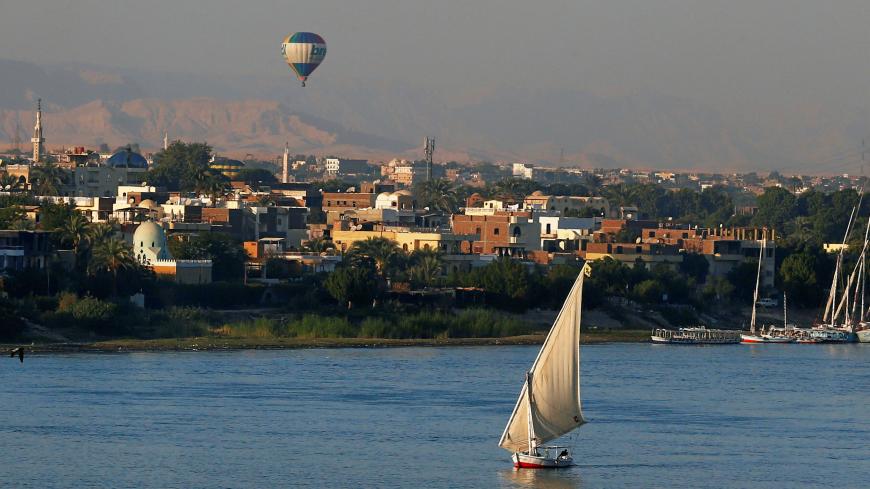 A balloon is seen above the Nile River as boats wait for tourists in the port city of Luxor, Egypt, Dec. 14, 2016. - REUTERS/Amr Abdallah Dalsh

So far, 2018 has been a negative year for Egyptian-Sudanese relations. On Jan. 4, Sudan recalled its ambassador from Egypt. Without providing further details, Sudan’s Foreign Ministry stated that Ambassador Kamal al-Din Hassan Ali was recalled for consultations. Egypt’s Foreign Ministry is weighing how to “take appropriate action.” This diplomatic spat has unfolded in a complicated context in which numerous issues have fueled tensions in bilateral relations for years.

The Grand Ethiopian Renaissance Dam project has contributed to friction in Cairo-Khartoum relations. Egypt sees the project as a major threat to its water interests, while Sudan views it as a valuable opportunity. In November 2017, Cairo officially declared that technical negotiations with Sudan and Ethiopia had failed. Then, at the beginning of January, President Abdel Fattah al-Sisi reportedly sent Ethiopian Prime Minister Hailemariam Desalegn a proposal to continue talks between Cairo and Addis Ababa over the megaproject, excluding Khartoum. Egypt denies that Sisi sent this proposal to Ethiopia’s leadership. Nonetheless, the Nile's water supply remains a source of much disagreement between Cairo and Khartoum.

According to Sudanese state-owned media, the Egyptian military has since deployed its forces to waters off the coast of the disputed Halayeb triangle border area, where Cairo has also sent warplanes. Although not a new conflict, Egypt and Sudan’s territorial dispute at the border area has recently escalated.

In April 2017, Khartoum saw itself in a stronger position due to more support from Arab Gulf monarchies and a new administration in Washington that may have appeared far more open to a Sudan-US rapprochement than any of US President Donald Trump’s three predecessors. This prompted Sudanese officials to ask Egypt to relinquish control of the area; Cairo’s refusal led to harsh words in the Egyptian and Sudanese media. Then friction intensified once Khartoum re-established a requirement that Egyptians must possess a visa to enter Sudan. The following month, Sudan banned the importation of Egypt-sourced agricultural products, and President Omar al-Bashir accused Cairo of arming rebels in Darfur, which Egypt denied. Egypt fired back, pointing to the residence of several Muslim Brotherhood members in Sudan.

In the grander regional picture, Egypt and Sudan find themselves on opposite sides of an increasingly polarized Sunni Arab world, underscored by the Qatar crisis. Egypt — along with Saudi Arabia and the United Arab Emirates — has sought to convince African states to back the Saudi/UAE-led bloc against Doha based on the narrative that Qatar is a rogue actor and a sponsor of terrorism. Yet Sudan has refused to join this anti-Qatar campaign. Khartoum’s “neutral” response to the Gulf dispute has been an outcome of Sudan — in complete contrast to Egypt — not viewing Doha as a menace and Sudan’s understanding that close ties with all six Gulf Cooperation Council states, including Qatar, best serves Khartoum’s interests. Illustrative of Egypt’s inability to bring Sudan behind the campaign against Doha was Qatari Chief of Staff Maj. Gen. Ghanim Bin Shaheen al-Ghanim’s visit to Khartoum at the end of last month, when he held discussions with his Sudanese and Russian counterparts about Red Sea security issues.

Since the eruption of Libya’s civil war in mid-2014, Egypt and Sudan have been opposing stakeholders in that conflict, with Khartoum aligning with Ankara and Doha instead of with Egypt and the UAE. Also, by November 2017, Egypt began inserting itself as an influential diplomatic actor in South Sudan’s internal environment for numerous reasons, namely to secure greater leverage over Sudan. Recent reports claim that Egyptian, Emirati and Eritrean military and political officials are coordinating, from Eritrea, with elements of Sudan’s opposition.

Egypt and Sudan have had an overall negative relationship since the aftermath of Hosni Mubarak’s visit to Addis Ababa in 1995, when gunmen tried and failed to assassinate him. Egyptian officials accused their Sudanese counterparts of plotting the assassination attempt. By October 2016, there was renewed optimism regarding a rapprochement after Bashir accepted Sisi’s invitation to Cairo, where he received Egypt’s highest military medal as a gesture from the Egyptian leadership. The two countries further signed a strategic partnership agreement and 15 memorandums of understanding.

Such hope was short-lived, as the various issues that heightened friction in Egypt-Sudan relations throughout 2017 prevented Bashir’s 2016 trip to Cairo from establishing more of a solid foundation for better relations. Ultimately, the emergence (or re-emergence) of new and old sources of contention between Egypt and Sudan has left the two countries with conflicting interests and clashing agendas in Africa and the Middle East.

Yet what recently brought the tension in Cairo-Khartoum relations to an entirely new level was Turkish President Recep Tayyip Erdogan’s visit to Sudan last month. Erdogan’s trip resulted in Sudan agreeing to temporarily give Turkey control of Suakin Island. This news alarmed many in Cairo and other Arab capitals who interpreted Bashir’s decision as essentially giving Turkey license to establish its second military base on the African continent. This also raised questions about Qatar or Iran being able to access a Turkish military installation within close proximity to Saudi Arabia and Yemen’s Red Sea coasts.

The Egyptian media lashed out at Sudan for embracing Erdogan and looking to Turkey for deeper military and economic ties. Cairo’s concern is that Sudan will use greater military might and diplomatic leverage from Ankara to step up pressure on Sisi with respect to both the Grand Ethiopian Renaissance Dam project and the Halayeb triangle border area. Beyond such strategic factors, which leave Egypt concerned about Turkey’s new foothold in the Red Sea, officials in Cairo see Sudan as facilitating Erdogan’s "neo-Ottoman" and pro-Muslim Brotherhood foreign policy ambitions, which do not sit well with Egypt and other Arab states.

Among the numerous lingering tensions between Cairo and Khartoum, the future of the relationship between these two Nile countries — once close allies — will largely depend on water issues. Failure to mend fences will ultimately make it increasingly difficult for the two to address major regional challenges facing both of them, such as extremism, fast population growth, climate change and transformation of industries. Yet if Cairo and Khartoum can pursue a diplomatic course of action, such cooperation could exemplify the ability of governments worldwide to overcome political tensions in pursuit of peace and good neighborly ties. The gloomy alternative is a future in which fast-paced demographic and environmental changes exacerbate food security and other vital interests of nation-states, leading to more "water wars."