US officials are skeptical of Cairo warnings to Ethiopia, even as Abdel Fattah al-Sisi's government expands defense ties in East Africa. 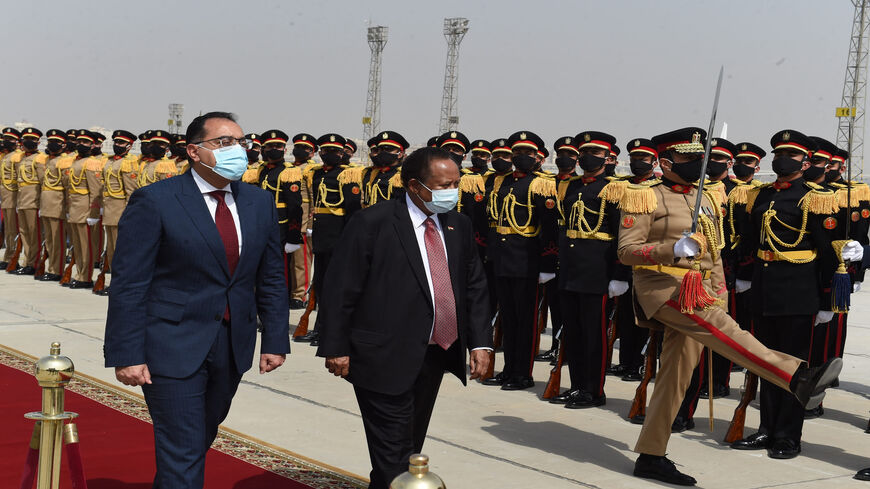 Egypt is hinting once again at the possibility of conflict with Ethiopia amid the failure of the latest round of talks over the controversial Grand Ethiopian Renaissance Dam (GERD) last week.

The fruitless negotiations came as Cairo sent air forces to North Sudan for joint combat exercises with Khartoum’s military. Although the chief of staff of Sudan’s armed forces, Gen. Mohamed Osman al-Hussein, said the exercise was “not targeting a certain country,” Egyptian officials’ statements have been more ominous.

“I tell our Ethiopian brothers: 'We should not reach the level that you mess with a water drop in Egypt, because all options are open,'” Egyptian President Abdel Fattah al-Sisi said April 7 after the tripartite negotiations in Kinshasa collapsed. “Cooperation between each other and building together is much better than when we disagree and struggle.”

The latest setback makes Ethiopia’s vow to fill the dam’s reservoir for a second time before July all the more likely to be fulfilled despite the renewed warnings from Egyptian officials, who blamed Addis Ababa last week for rejecting a Sudanese proposal to bring in foreign mediation.

Egypt and Sudan are demanding Ethiopia commit to a legally binding agreement on the dam’s use, but Prime Minister Abiy Ahmed’s government has so far refused, offering the possibility of guidelines instead.

Cairo’s armed forces also issued a stern warning following the exercise at Merowe air base last week. “The Egyptian army stands side by side with the Sudanese army in the same trench to defend it,” said army Chief of Staff Lt. Gen. Mohamed Farid.

Dubbed Nile Eagles 2, the exercise focused on the two countries’ abilities to “face joint challenges in order to secure the borders and protect resources,” said Farid, in an apparent reference to the dispute over the Nile dam, which Egypt fears will severely restrict its access to fresh water for its nearly 100 million people.

But despite the rhetoric, current and former US officials familiar with the matter say Cairo appears unlikely to attempt a conventional military escalation anytime soon.

“For decades Egypt was clearly militarily superior, but there’s been a shift,” said Tibor Nagy, who served as the State Department’s top official for Africa until he retired in January.

An Egyptian strike on the dam would almost certainly provoke a war with Ethiopia, whose relatively sophisticated air capabilities — demonstrated during its 1998 war with Eritrea — and recent acquisition of Russian Pantsir-S1 mobile air defense systems threaten to make such a move costly for Cairo.

There is no guarantee such a strike would even succeed at hitting the dam, said Nagy, who also served as US ambassador to Addis Ababa during the war with Eritrea.

“Militarily I don’t think the Egyptians would be capable of going up into the Ethiopian highlands,” he told Al-Monitor.

A current US official familiar with intelligence assessments on the matter agreed, saying on condition of anonymity that such an operation would be difficult due to the limitations of Egypt’s air force.

Some of those limitations are by design, albeit for other reasons. For decades the United States refused to sell Cairo the F-15 fighter aircraft, instead sending the lighter, shorter-range and more maneuverable F-16, despite providing the F-15 to Saudi Arabia and Israel.

Egypt’s military has sought to bypass that restriction and extend its aerial strike range in recent years by ordering some two dozen Russian Su-35 aircraft despite warnings by Trump administration officials of potential US sanctions.

Cairo also requested advanced over-the-horizon targeting systems as part of an order for F-16s and F-15s from Washington during the Trump administration, according to a former US official familiar with the matter.

Despite support from CENTCOM commander Gen. Kenneth “Frank” McKenzie, who saw the potential sale as a way to free up American forces in the region and dissuade Cairo from purchasing additional Russian aircraft, the State Department’s Bureau of Political-Military Affairs ruled out including the advanced systems.

“The question was, what do they want to use this for?” said the former official, who spoke on condition of anonymity to discuss the potential arms sale.

“The only answer was nothing good. Certainly nothing we would support,” the former official said.

At least as far back as the presidency of Hosni Mubarak, Cairo has considered extending its strike range against the dam with basing access in Sudan. Egyptian officials have also reportedly discussed establishing an air base in Somaliland.

A recent letdown in tensions between Cairo and Turkey over Libya’s war, as well as with Qatar, has allowed Sisi’s government to focus on building leverage in East Africa over the GERD dispute.

Yet there is no guarantee Khartoum would support an overt Egyptian military operation against the GERD.

“Egypt and Sudan are not yet in lockstep,” said Mirette Mabrouk, a senior fellow and director of the Egypt program at the Middle East Institute in Washington.

Though ties between the two countries have grown since the 2019 popular overthrow of Sudan’s longtime dictator Omar al-Bashir, Ethiopia’s outreach to Sudan over safety concerns about the dam mean “Cairo cannot take Khartoum’s support for granted,” Mabrouk told Al-Monitor.

One potential complication that US officials are eyeing is the revival of Ethiopia’s bloody border dispute with Sudan in recent months.

According to the United Nations, the fighting has sent nearly 60,000 Ethiopian refugees across the border into Sudan, which is undergoing an extremely fragile political transition since Bashir’s overthrow.

“Hopefully cooler heads will prevail. Neither Addis nor Khartoum wants the Al-Fashqah triangle situation to get out of hand,” Nagy told Al-Monitor.

Another potential flashpoint could come in the form of a major regional drought. “If Ethiopia [fills the dam] and there is a drought, and if the Aswan Dam is drained, there will not be enough water for 100 million people [in Egypt],” Mabrouk noted.

Despite the severity of the threat posed by the GERD, a conventional strike would be out of character for Cairo’s foreign policy, at least until all other options are exhausted, she said.

“While you cannot discount the option, there's unlikely to be a military solution to this conflict,” said Mabrouk, adding, “Egypt understands full well the costs. That makes it anathema, but it remains a last resort."

Officials in Addis Ababa may well be counting on that. Abiy's government is unlikely to concede for the time being, at least until after Ethiopia’s general elections in June, according to Nagy.

Under fire amid allegations of war crimes in the Tigray region, Abiy’s government has staked much of its political future on the widely popular dam project.

“I can’t see them holding any kind of serious negotiations until after the election and until a second filling [of the dam's reservoir],” said Nagy. “This can be resolved, but not today.”

“The main sticking points can be done away with as long as the main participants have the political space to have some flexibility,” he said. Still, the reelection chances for Abiy’s party remain uncertain.

"What is not going to happen is that almost 100 million people are going to get up in the morning to turn on their taps and find there is no water to drink, because someone up the road is fulfilling an electricity contract," said Mabrouk.