Egypt and Sudan started a new military exercise amid a dispute with Ethiopia over Addis Ababa’s plan to add 13.5 billion cubic meters of water to the reservoir of its dam on the Blue Nile. 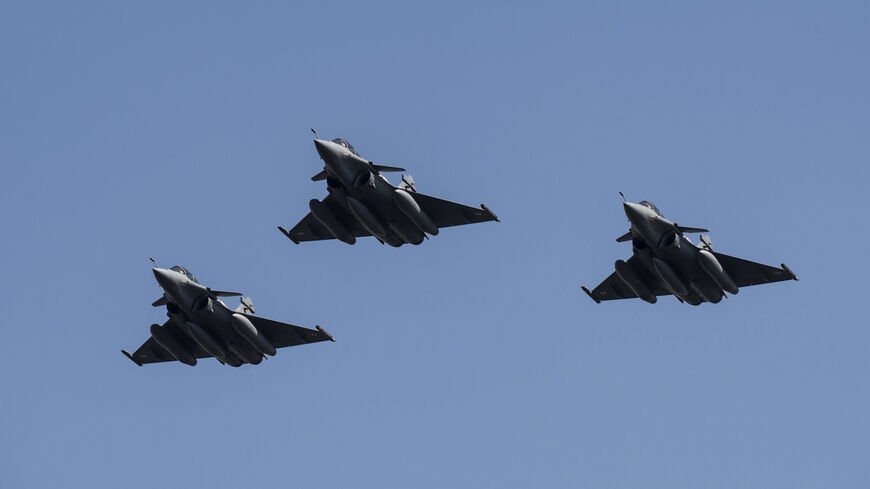 Ground, naval and air forces from Egypt and Sudan began a joint military exercise May 26, amid mounting tensions with Ethiopia over its dam project on the Blue Nile River.

The Egyptian army said the six-day training, dubbed “Guardians of the Nile,” aims to boost combat preparedness of the participating forces and bolster joint military cooperation between Egypt and Sudan.

Military spokesman Tamer El-Refaie said the joint drill includes carrying out joint sorties on different targets and the execution of several typical and atypical target practices by special forces and paratroops from both countries.

“The training highlights the level of professionalism and capabilities in executing missions and shows the combat readiness of the participating forces to support peace and stability in the region,” Refaie said in a statement.

The Sudanese army said the training, which takes place in different areas in Sudan, aims to exchange military expertise and unify action methods to counter threats.

“This military exercise has nothing to do with the Grand Ethiopian Renaissance Dam [GERD],” Abdallah al-Bashir, deputy chief-of-staff of the Sudanese army, said in an interview with Al-Arabiya television.

He said the training is part of military exercises between the Sudanese and Egyptian armies and is not targeting any country. “The exercise is meant for boosting preparedness of our military forces and benefiting from the expertise of other countries to be ready to defend our rights,” Bashir noted.

Egypt and Sudan are at loggerheads with Ethiopia over its construction of the GERD on the Blue Nile, a main tributary of the Nile River. Both countries fear that Ethiopia’s plan to add 13.5 billion cubic meters of water during East Africa’s rainy season in July to the GERD reservoir will harm their water share from the Nile.

While Ethiopia sees the GERD as a key to economic development, Egypt fears that filling the dam without an agreement will harm its water share from the Nile, the country’s only source of freshwater. Sudan, meanwhile, wants Ethiopia to coordinate on the dam’s operation to protect its own power-generating dams on the Blue Nile.

Ethiopia has resisted pressure from Egypt and Sudan to reach a binding deal on the filling and operation of the GERD based on international law and norms governing cross-border rivers. Years of negotiations between the three countries have failed to make any breakthrough.

“This exercise is a message to any country that seeks to threaten Egypt’s interests,” said Maj. Gen. Nasr Salem, former head of the Egyptian army’s reconnaissance department and professor of strategic studies at the Nasser High Military Academy.

He told Al-Monitor by phone that the joint training primarily aims to enhance combat preparedness of the Egyptian and Sudanese forces. “But it also sends a strong message to Ethiopia and any other country that might think of harming the vital interests of both Egypt and Sudan,” Salem said. “The exercise shows that both Cairo and Khartoum have the will and capability to prevent any threat to their interests.”

On April 7, Egyptian President Abdel Fattah al-Sisi renewed his warning to Ethiopia of the risk of a conflict over filling the GERD without an agreement with downstream countries. “I tell our Ethiopian brothers, 'We should not reach the level that you mess with a water drop in Egypt, because all options are open,'” Sisi said. “Cooperation between each other and building together is much better than that we disagree and struggle.”

Egypt and Sudan have moved in recent months to strengthen cooperation, culminating in the signing of a military pact between the two countries March 2.

The military training came a few weeks after commando and air forces from Egypt and Sudan concluded a five-day exercise at Merowe air base in northern Sudan.

Salem believes the Egyptian-Sudanese exercise also aims to pressure the international community to intervene to help reach an agreement on the GERD operation between the three countries before the situation goes out of control.

“Egypt and Sudan are sending a clear message to Ethiopia and anyone else to think twice before taking any action that may harm their vital interests,” Salem said.

Located in northwestern Ethiopia, 15 kilometers (9 miles) from its border with Sudan, the GERD is being constructed by Webuild Group, a subsidiary of Italian construction giant Salini Costruttori S.p.A. When completed, the dam project will comprise a main dam in roller compacted concrete with two power stations installed along both banks of the river.

According to WeBuild, the power plants will be outfitted with 16,375-megawatt Francis turbines that could produce about 15,759 gigawatt-hours (GWh) per year. However, researchers at the University of Washington suggested the hydrology of the upper Blue Nile Basin indicates an inflow to sustain 13,629 GWh per year, likely resulting in idled turbines. The GERD’s capacity is more in line with a 5.1-gigawatt (Gw) capacity, compared with previous designs that have put it at 6 Gw and 6.4 Gw, the researchers concluded.

Still, with more than twice the power capacity of Egypt’s 2.1-Gw High Aswan Dam, the GERD is slated to become the largest hydropower project in Africa.

On May 25, Mustafa Hussein al-Zubair, Sudan’s chief negotiator on the GERD, told Anadolu Agency that Ethiopia has already started the second-round filling of the dam. Another Sudanese official told Reuters on condition of anonymity that technical records show changes in the level of the Blue Nile, indicating that water was being pooled.

Ethiopia, however, was quick to deny the claim. “This is not true,” Ethiopian Water Minister Seleshi Bekele told Bloomberg by text message. He said the comments by Sudanese officials are “deliberately misleading statements targeted to confuse everyone.”

Hani Raslan, head of the Nile Basin Studies Unit at Al-Ahram Center for Political and Strategic Studies in Cairo, believes that Ethiopia has not started the second filling of the dam.

“In order to complete the second-round filling of the dam, Ethiopia has to increase the height of the middle part of the dam to 30 meters [98 feet], which Addis Ababa has not done yet,” Raslan told Sky News Arabia television.

He said, “Until now, Ethiopia only increased the middle part by only 5 meters [16 feet] because it started late in early May instead of March."

Raslan concluded, “Ethiopia is not expected to finish raising the dam’s second part before the start of the rainy season in July, which means that it will be able to store only around 4-5 billion cubic meters, down from the planned 13.5 billion cubic meter.”