Turkey views ties with Ethiopia as key to influence in Africa

Turkey’s quest for normalization with Egypt and a new beginning with Sudan hinges on how far Ankara takes its relations with Ethiopia amid a simmering water dispute in the region over Ethiopia’s mega dam on the Nile. 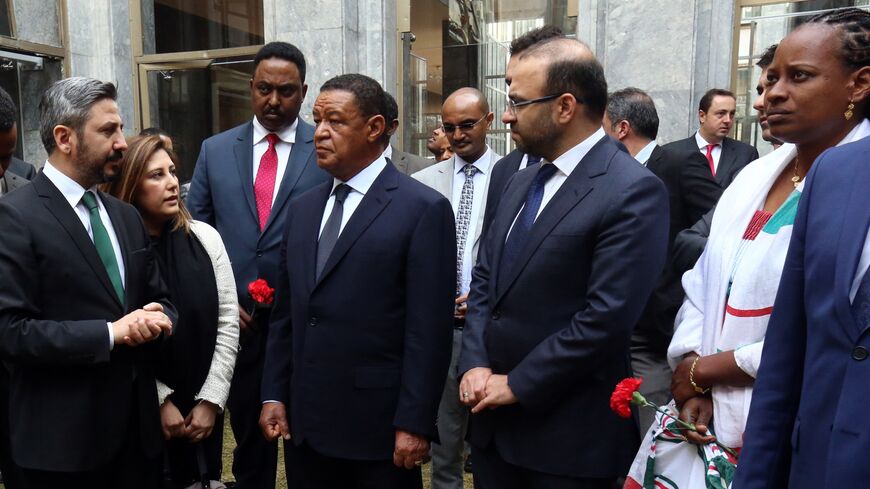 The Turkish parliament's Deputy Speaker Ahmet Aydin (L) accompanies Ethiopian President Mulatu Teshome Wirtu (C) on Feb. 7, 2017, in Ankara as he visits the parliament, which was damaged during the failed July 15, 2016, coup attempt that Turkey blames on the Gulenist movement. Ethiopia made inroads with Turkey by expressing solidarity with Ankara following the putsch and by transferring Gulenist schools to a foundation associated with the Turkish government. - ADEM ALTAN/AFP via Getty Images

The crisis in the Nile basin over the Grand Ethiopian Renaissance Dam has emerged as a new balancing factor in Turkey’s ties with Ethiopia, Egypt and Sudan as Ankara seeks to mend fences and regain influence in the region.

Ethiopia has sought better relations with Turkey in recent years, keen on enlisting Turkish support against the Arab backing for Egypt and Sudan in the escalating row over the waters of the Nile. Turkey, for its part, has made Ethiopia the main gateway of its quest for regional influence after losing its allies in Egypt and Sudan due to changes in governments in those two nations.

Cairo and Khartoum are both wary that Turkey might expand its ties with Ethiopia to the military realm and upset the balance in the region. One reason why Cairo welcomed Ankara’s normalization bid earlier this year was to push Turkey into a neutral position in terms of the equilibrium in the Nile basin. Khartoum appears to be making a similar calculus as diplomatic efforts to resolve the dam crisis remain futile.

After the 2019 overthrow of Sudanese leader Omar al-Bashir, a close ally, Ankara found itself at odds with the new rulers in Khartoum, who were supported by Saudi Arabia and the United Arab Emirates. In the past several months, however, the bilateral chill has quietly thawed. In late May, Mohamed Hamdan Dagalo, the vice president of the Sovereign Council that oversees Sudan’s transition to civilian rule, became the first high-level Sudanese official to visit Ankara since Bashir’s ouster.

And on Aug. 12-13, the head of the Sovereign Council, Abdel Fattah al-Burhan, paid a visit to Ankara, hosted at the highest level by President Recep Tayyip Erdogan. The two sides signed accords on cooperation in the fields of energy, finance and media as well as a deal on “military fiscal cooperation” and an “implementation protocol on monetary aid.”

Although the ties remain far from their old warmth and extent, the contacts show that the relationship is being repaired and that Sudan is eager to have Turkey on its side in the regional crisis.

Erdogan’s visit to Sudan in December 2017, accompanied by more than 100 businesspeople, caused a storm in the Red Sea basin — not because of the 22 accords signed in various fields such as agriculture, tourism, mining, transport and education but rather Khartoum’s decision to lease its Suakin Island to Turkey. Ankara’s plans for the island, a former Ottoman forward post, involved the restoration of Ottoman monuments but also the construction of a military base, which fueled anxiety of an “Ottoman return” among regional countries, especially Egypt and Saudi Arabia. Those looking into the external factors behind Bashir’s ouster might well find the traces of the fears that the Suakin deal had sparked.

Turkish companies had clinched projects worth $2.24 billion in Sudan by 2019, as Erdogan and Bashir set a target to raise the $500 million bilateral trade volume to $10 billion. In a remarkable development ahead of Burhan’s visit to Ankara, Sudanese officials decided to go ahead with Turkish contractor Summa in a project for a new international airport in Khartoum. The $1.1 billion deal, signed in March 2018, had stalled amid the political clamor in Sudan.

Ankara’s ties with Addis Ababa have notably advanced since Turkish officials' acrimonious fallout with Cairo in 2013 over the overthrow of Turkey's Muslim Brotherhood allies. Reports that Turkey has offered to share its dam expertise with Ethiopia have sent Cairo fuming. After a failed compromise-seeking trip to Addis Ababa in 2014, Egypt’s irrigation minister charged that Turkey and Israel were behind the Renaissance Dam project. Ethiopia rejected the claim, saying its cooperation with Turkey was “none of Egypt’s business.”

Addis Ababa’s active solidarity with Ankara after the 2016 coup attempt in Turkey provided impetus for better Turkish-Ethiopian relations. Most notably, it heeded Turkish calls to transfer a network of schools run by the Gulen movement — a religious community that Ankara blamed for the putsch and designated as a terrorist group — to a foundation affiliated with the Turkish government. The handover of 11 remaining schools was formally completed Aug. 11.

On the economic front, bilateral trade grew by $200 million to reach $650 million in the past two years, according to Turkey’s ambassador to Ethiopia, Yaprak Alp. Turkish investments in Ethiopia have reached $2.5 billion, ranking second only to China, with some 200 Turkish companies employing 30,000 people in the country, according to Alp.

Following speculation that Turkey might offer radar and missile systems to guard the Renaissance Dam, sources from Ethiopia’s Tigray region (the scene of an escalating conflict between rebel forces and the federal government) claimed in July that Ankara had supplied 10 drones to Addis Ababa and a runway was being built near the capital to use the drones. The claims have yet to be independently confirmed, but the Turkish Embassy has denied any drone deliveries to Ethiopia.

Ankara is well aware that any direct Turkish involvement in the dam crisis or the Tigray conflict will cost it a permanent fallout with Egypt and Sudan. Despite an ambivalent posture that keeps Cairo and Khartoum uneasy, Ankara’s moves in Ethiopia have been much more cautious and restrained than its ventures in Libya and Syria.

When a special envoy of Ethiopian Prime Minister Abiy Ahmed met with Turkish Foreign Minister Mevlut Cavusoglu in Ankara in July 2020, many took this as a sign that Turkey was siding with Ethiopia in the dam row. Some Turkish media, meanwhile, claimed that the envoy had asked Ankara to mediate in the dispute. And in March, a Turkish official said Ankara was ready to mediate talks on the dam.

Ethiopia, however, has said little on the issue, even though it has been open to Turkish mediation in its border dispute with Sudan. Moreover, the mediation claims came at a time when Ankara lacked any leverage for such a mission, for its diplomatic dialogue with Cairo had not yet begun and its ties with Khartoum were still mired in uncertainty. The normalization process with Egypt has made little progress since then, meaning that Ankara still lacks the ground to mediate. Egypt and Sudan have sought international intervention, including through the Arab League and the UN Security Council, while Ethiopia insists that the African Union should continue to mediate the dispute.

Either way, the fears of the three countries in the Nile basin have given Turkey the opportunity for rapprochement and fence-mending in the region. Yet the raw spots in the Ethiopia-Sudan-Egypt triangle should be a reminder to Ankara as to why militarizing Turkish foreign policy through drone sales or military bases is a bad idea.