Egyptian authorities have been frustrated by official statements from Doha expressing Qatari concern about increasing violence in Egypt, as Cairo considers it interfering in its internal affairs. 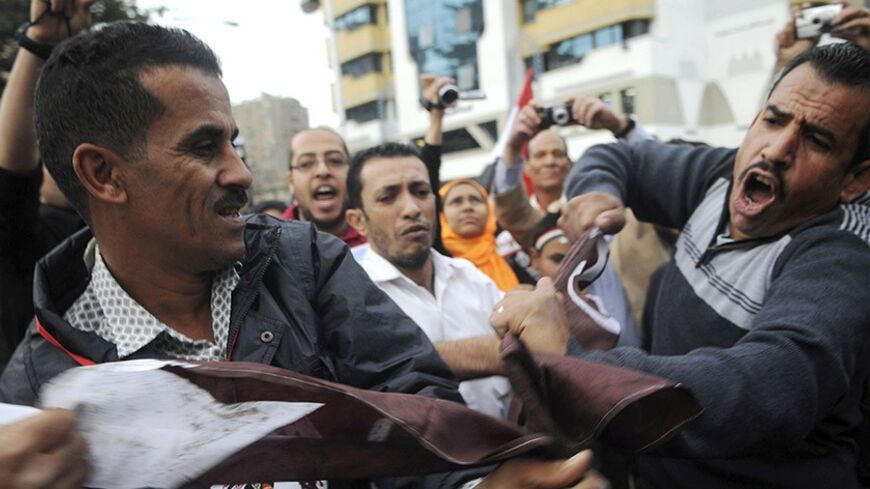 Egyptians cut a Qatari flag during a protest outside the Qatari Embassy, Cairo, Nov. 30, 2013. - REUTERS

In the past two weeks, tensions between Egypt and Qatar have risen, especially after the Qatari Ministry of Foreign Affairs issued a statement about the ongoing violence in Egypt. Cairo considered it brazen interference in its internal affairs and an attempt to distort its image before the international community.

In the official Qatari statement released Jan. 3, the Ministry of Foreign Affairs expressed its concern about the growing number of victims from demonstration suppression and the large number of people being killed throughout Egypt. It also asserted that a dialogue between all the political trends is the only solution to the crisis and that a security approach will not lead to stability. Moreover, the ministry condemned the decision to designate political movements as terrorist organizations, stating, “This decision initiated the policy of firing at protesters to kill them.”

A few hours after the statement was released, Egypt's interim government officially and publicly expressed its dismay. On Jan. 5, Foreign Affairs Minister Nabil Fahmy issued a press statement in which he said, “We reject the Qatari stance, in form and content, and there should not be any intervention in internal Egyptian affairs.” He considered the Qatari statement a reflection of “bad” intentions, released in the context of settling scores.

An Egyptian diplomatic source informed on Egyptian-Gulf relations and thinking in decision-making circles told Al-Monitor, “Egypt has made urgent moves during the past two weeks to stop repeated Qatari interference in its affairs. We won’t dismiss the possibility that Qatar’s relations with Egypt might have the same fate as Turkey’s. The Egyptian ambassador in Doha might be [recalled] if Qatar continues intervening in Egyptian affairs and distorting the image of Egypt’s political administration before the international community.”

He added, “Egypt expressed its objection to the Qatari stance [in a complaint filed with] the Gulf Cooperation Council [GCC], as a first step in escalation. Meanwhile, some Gulf countries, such as the UAE and Saudi Arabia, have been intervening to play the role of mediator and to convince Qatar to stop its attack on Egypt and adopt more balanced stances.”

The source also revealed to Al-Monitor, “The Egyptian government officially asked the GCC, and Qatar in particular, to support it in countering the ‘violence’ of the Muslim Brotherhood in Egypt. The Egyptian government thinks that Qatar is supporting the Brotherhood, publicly and politically through its media, and believes that this support threatens Egypt’s national security.”

The Qatari government had provided Egypt $7.5 billion in loans and gifts during deposed President Mohammed Morsi's one year in office. Now, however, with tensions running high, the current Egyptian administration announced on Jan. 24 that in 2014 it will return $3 billion, in two installments, that Qatar had invested in bonds. On top of that, in September 2013, Egypt had already returned $2 billion to the Qataris after failed negotiations to convert the money into bonds. Months later, in November and December [2013], Egypt returned a total of $1 billion in deposits after Qatar declined to renew them upon maturity.

In an unprecedented step reflecting the extent of the strain in Egyptian-Gulf relations, on Jan. 5, Egypt summoned Qatar’s ambassador, Seif Moqadam al-Boinin, to inform him of the government's official objection to his Foreign Ministry’s statement on the ground of interference. Egypt decided to delay a withdrawal of its ambassador to Qatar until after the referendum on the new constitution to prevent disruption in voting by the Egyptian community in Qatar.

Egyptian Foreign Ministry spokesperson Badr Abdel Ati told Al-Monitor, “We are dealing patiently with the Qatari position, and we are taking our decisions gradually. We are still tolerant and open to a strong relationship [with Qatar], although [our relationship] was breached when Qatar interfered in Egyptian affairs. Egypt will not allow meddling in its affairs again.”

Concerning Turkish Prime Minister Recep Tayyip Erdogan's demand that Morsi be released from jail and his criticisms of the July 3 coup, Abdel Ati contended, “Our stance vis-à-vis Turkey was changing gradually. Yet it was important to resolutely take the decision to ask the Turkish ambassador to leave Egypt [on Nov. 23] after his government insisted on accusing and offending Egypt and Egyptian symbols. We issued several warnings, but in vain.” He ruled out the possibility of finding a diplomatic solution at present for Turkish-Egyptian relations, adding, “The Egyptian ambassador’s return to Ankara is not currently on the Egyptian political agenda.”

Abdel Ati demanded that Qatar implement the articles of the GCC security cooperation agreement that it signed in 2004 to ban funding of terrorist groups and to refrain from sheltering their members. He also asserted that other Gulf countries had made efforts to improve relations with Egypt.

An official source close to the Egyptian government told Al-Monitor, “The real crisis with Qatar has to do with the continuous media escalation through Al Jazeera, especially Al Jazeera Egypt Live. The channel broadcasts daily images that reflect the instability of the Egyptian political scene. This never ceases to upset the Egyptian government, because the media clearly has a negative impact on international public opinion.”

A group of politicians from the Wafd, al-Karama, al-Masri al-Dimuqrati and Tagammu parties who support the current Egyptian administration launched an attack on Qatar, Turkey and Iran in light of their support of the Muslim Brotherhood, and thus according to the government line, support of terrorism and efforts to foster instability of Egypt. They requested that the government “resolve” the crises with these countries as soon as possible by severing diplomatic relations with all of them. On Jan. 4, the Iranian Foreign Ministry spokeswoman had expressed her country's concern about the rise in violence in Egypt surrounding protests.

Although Egypt has expressed dissatisfaction with statements by Turkey, Qatar and Iran about its internal politics, going so far as to issue official diplomatic objections to them, the administration seemed not to be bothered by statements made Jan. 13 by Dubai ruler Sheikh Mohammed Bin Rashid al-Maktoum. In a BBC interview, Maktoum said that he would prefer that Egyptian Defense Minister Abdel Fattah al-Sisi not run for president and instead remain in his current position. This statement Egypt's leaders considered “friendly advice from a brotherly Arab state,” in the words of the Egyptian Foreign Ministry spokesperson.

Hussein Haridi, a former assistant foreign minister and Arab affairs expert, told Al-Monitor, “We cannot put the Egyptian stance toward Turkey on par with its stance toward Qatar, because the situation is completely different. Qatar is a brotherly Arab state, and we are bound by our relationship with it, due to Egyptian foreign policy values. These are based on nationalism and patriotism toward the Arab countries and aim at maintaining cultural and economic relations. We should realize the strategic and national dimension of the relationship with Qatar, which is considered an important and effective member of the GCC. It is better to contain the tensions. Both Qatar and Egypt should avoid any escalation. Egypt should also steer clear of offending Qatari figures.”

Haridi added, “We can understand the problems in relations with Turkey due to their historical context. Turkey keeps treating Egypt as an ‘adversary.’ Moreover, Turkey recognizes Israel and did not support Egypt in its [1973] war against Israel. We also cannot take into [true] account the stances of Turkish Prime Minister [Recep Tayyip] Erdogan, because he is facing increasing internal problems and wide criticism from his opponents in Turkey.”

He also contended, “It won’t cause Egypt any harm if it distances itself from Turkey for the time being, especially since Turkey currently doesn’t have power in the Middle East, and it has misjudged the Syrian crisis. We have reached the highest degree of escalation with Turkey, because Erdogan has trespassed all diplomatic limits and norms.”

Attempts to contain tensions between Egypt and Qatar continue, following on earlier efforts by Gulf states to mediate their dispute. They are obstructed in part by the ongoing violence in Egypt's streets and the growing number of victims killed in public squares and universities on a daily basis. The Egyptian administration is running out of excuses to justify its positions to the international community, although the first steps of the roadmap passed muster in the constitutional referendum.