Egypt’s role in the push to cut off Qatar

With three Gulf states revolting against Qatar's regional policies, Egypt has found the perfect opportunity to sever ties with Qatar after four years of political bickering. 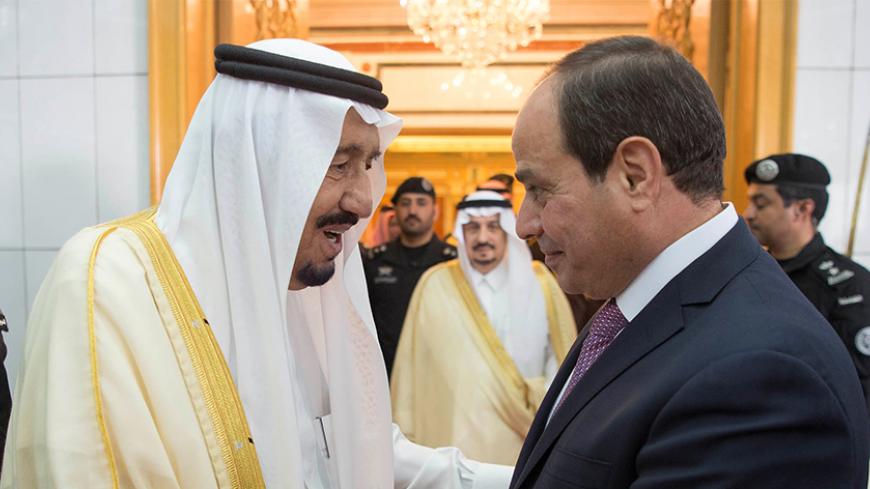 CAIRO — After four years of Egyptian-Qatari skirmishes since the ousting of former President Mohammed Morsi for his affiliation with the Muslim Brotherhood, Cairo has now decided to respond to Qatar’s harassment by following in the footsteps of Saudi Arabia, the United Arab Emirates (UAE) and Bahrain and sever diplomatic ties with Qatar.

A statement issued June 5 by the Egyptian Ministry of Foreign Affairs explained why Egypt has decided to break its ties with Qatar, citing the Qatari regime’s insistence to adopt an approach hostile to Egypt, support terrorist organizations — especially the Muslim Brotherhood by harboring its leadership — promote the Islamic State (IS) ideology in the Sinai Peninsula and interfere in Egypt’s internal affairs.

Although Cairo's announcement of shunning Qatar came after Saudi Foreign Minister Adel al-Jubeir’s visit to Cairo June 4, the Egyptian position had appeared clear in the speech of President Abdel Fattah al-Sisi at the US-Arab Islamic Summit in Riyadh May 21.

In his speech, Sisi specifically accused countries in the Arab region of supporting terrorism. Egyptian satellite stations on June 4 repeatedly showed a rerun of Sisi’s speech in addition to media reports attacking and criticizing Qatari policies as being behind instability in the region.

A diplomatic official at the Egyptian Foreign Ministry familiar with the developments in the Gulf told Al-Monitor on condition of anonymity, "Egyptian diplomacy sees the strict Gulf stance against Qatar this time in its favor.”

He explained that “Egypt made several political and diplomatic attempts over the past four years to obtain a strong Gulf position against Qatar‘s policies. But Qatar’s repeated attempts of appeasement and containment prevented Egypt from obtaining tangible guarantees mitigating the risks ensuing from Doha policies on its national security. Qatar’s commitments to abide by the GCC's [Gulf Cooperation Council] decisions succeeded in calming the Gulf anger. Indeed, three Gulf countries reinstated their respective ambassadors to Qatar only nine months after deciding to recall them in March 2014.

The official added, “Diplomatically speaking, the decision to sever ties marks the highest level of escalation against Qatar's policies. Cutting ties and halting air and sea traffic between the two countries is a political maneuver targeting mainly the political system in Qatar and is not intended to harm the interests of Qatari nationals in Egypt or damage Qatari private investments inside Egypt whose fate is still subject of discussion.”

Responding to criticisms leveled against Egypt of taking a stance biased to Saudi Arabia and the UAE, he said, “Egypt had exerted concerted efforts to push Gulf countries to take such a unified position. We provided Gulf countries with several information reports proving Qatar's involvement in terrorist acts and its policies that harm Gulf interests and the security of the Arab region in particular in relation to the crises in Yemen, Syria and Iran.”

It is worth recalling that many Arab and African countries had cut or downgraded their diplomatic ties with Iran in solidarity with Saudi Arabia following the attack on the Saudi Embassy in Tehran in June 2016. Egypt, however, did not break its ties with Iran.

This shows that Cairo does not accord high importance to the Qatari-Iranian rapprochement, while it is this same rapprochement that further encouraged Saudi Arabia, the UAE and Bahrain to cut their relations with Qatar against the background of statements attributed to the emir of Qatar, criticizing the Gulf hostility to Iran. Qatar has maintained that the statements — which appeared in a news ticker during a Qatari state TV broadcast — were the result of a hacking attack.

Egyptian Ambassador Ahmed al-Quesni, the assistant foreign minister for Gulf affairs, told Al-Monitor, “Egypt's political gains ensuing from the decision to sever relations with Qatar cannot be determined now, but the Egyptian stance in line with that of three major Gulf states is an ideal move that serves Egypt’s position.”

He added, “Although most indicators of the situation in Qatar suggest so far that there are attempts to calm the situation, Egypt cannot settle for any temporary guarantees to stop any hostile activity taken by the Qatari administration against it.”

“Egypt has the right to take action in any issue that has proven Qatar’s involvement in policies supportive of terrorism in all international forums,” he said.

The decision to sever relations with Qatar was widely welcomed by local Egyptian newspapers and media outlets, which have launched extensive media campaigns against Qatar and its emir, accusing the Qatari regime of being behind the terrorist threats to Egypt. The Egyptian parliament also welcomed the decision.

Kamal Amer, the head of the Egyptian parliament's National Defense and Security Committee, described in press statements June 5 the decision as a decisive step after Egypt has long been patient toward Qatar’s hostile efforts against Egypt.

In a press statement on the same day, Ambassador Mohammad al-Arabi, a member of the parliamentary Foreign Relations Committee, called for an escalation of sanctions against Qatar should it not renege on its position. He called for taking measures that go beyond land, air and sea embargo only.

Ambassador Sayyed Qassim, an adviser to the secretary-general of the Organization of Islamic Cooperation, told Al-Monitor, “The Gulf states’ sudden decision to sever relations with Qatar was excessive. As per diplomatic norms, sanctions are imposed gradually. However, this decision was meant to shock the Qatari administration.”

Qassim criticized the impact of political differences on the people’s public interests. “There is a diplomatic custom, whereby differences among Arabs should not harm Arab people. Saudi Arabia’s decision to expel Qataris from Saudi territories came in direct conflict to this custom,” he said.

In terms of gain and loss dynamics, Cairo has achieved great political and diplomatic progress by taking part in the Gulf’s decision against Qatar. It found a decisive response to Qatar’s practices, which the Egyptian regime has always regarded as a direct threat to its national security.