Egypt's designation of the Muslim Brotherhood as a terrorist organization could cause the Brotherhood problems in other Arab countries. 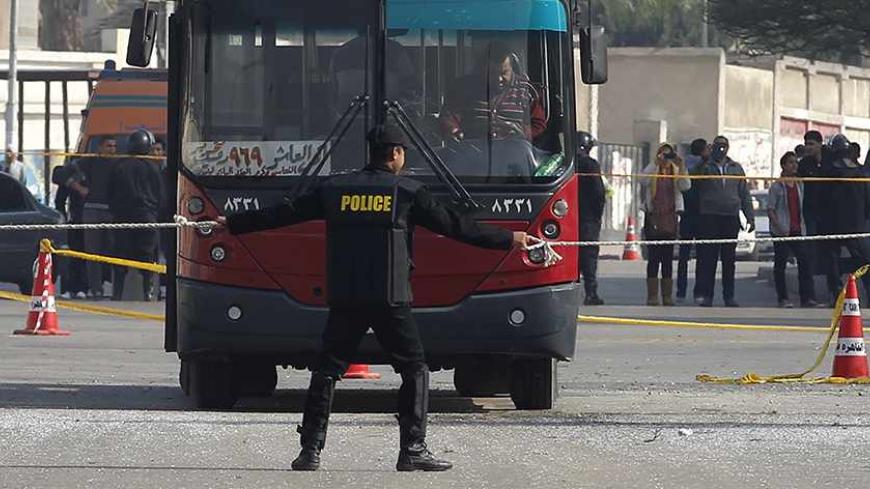 A policeman stands guard at the scene of a bomb blast that damaged a bus near the Al-Azhar University campus, Nasr City, Cairo, Dec. 26, 2013. - REUTERS/Amr Abdallah Dalsh

CAIRO — Less than two days after a suicide bombing on Dec. 23 targeted the Dakahlia police department in the Nile Delta city of Mansoura, killing 17 and injuring more than 100, Egypt's interim cabinet declared the Muslim Brotherhood, the mother organization of ousted President Mohammed Morsi, a terrorist organization.

"Egypt's cabinet has decided to declare the Muslim Brotherhood a terrorist organization subject to Article 86 of the penal law," Hossam Eisa, Egypt's deputy prime minister and minister of higher education, announced at a news conference held on Dec. 25.

Eissa said, "Punishments of terrorism acts stated by the law would be applied to anyone participating in the activities of the Muslim Brotherhood group or organization, anyone promoting it verbally or by writing, and everyone financing it."

"Punishments would be applied to anyone who joins the Muslim Brotherhood group or organization, or continues to be a member of both since the declaration," Eissa said. "All Arab member states of the 1998 counterterrorism treaty would be informed of this decision," he added.

Article 86 of Egypt's penal law, which was presented as the legal basis for the government's declaration on Dec. 25, indicates that being a member of a terrorist organization is punishable with a jail sentence of a maximum of five years; punishments for financing and occupying leadership positions in any terrorist organization could be as severe as life imprisonment or the death penalty.

Government authorities started applying the decision hours after it was declared by confiscating the Muslim Brotherhood's official Freedom and Justice newspaper. Unnamed officials of the newspaper told the Egyptian online daily Al-Mogaz, "The state-owned Al-Ahram Publishing House received orders to stop printing the paper, while government personnel continued to confiscate what was already printed."

The Egyptian cabinet's decision, which was called for by a wide array of anti-Muslim Brotherhood movements, political parties and figures, sparked a wave of reactions from the country's severely polarized political arena.

"This is an exaggerated decision and seems to be taken without an adequate study of the country's political and security conditions. The crime of Mansoura, for example, which sparked this decision, hasn’t been investigated yet," said Gamal Sultan, a prominent researcher of Islamist movements and editor in chief of the independent Al-Masreyoon newspaper.

"It is also aimed at other currents that are accused of coordinating with the Brotherhood or adopting similar views, despite the fact that some of those currents have been completely against the Brotherhood from the very beginning," said Sultan, referring to revolutionary activists and groups that are publicly criticizing the military, police and the interim government. The groups and activists include the April 6 Movement, whose founders Ahmed Maher and Mohamed Adel were sentenced to three years in prison less than two weeks ago.

The April 6 Democratic Front, a post-2011 offshoot of the April 6 Movement, had its own view of the government's decision.

"We believe that the Muslim Brotherhood has been endorsing and providing an umbrella for militant and terrorist groups and accordingly we are not completely against the government's decision, but we have concerns regarding the broad sectors of people included in this declaration," said Mustafa al-Hagari, the official spokesman of the April 6 Democratic Front.

"The application of the government's decision could allow mass and random arrests and targeting of innocent and apolitical members of the Muslim Brotherhood, who have no actual role in the group's policies or activities," Hagari added.

"This decision will backfire and increase the number of Muslim Brotherhood sympathizers if used to launch random and unjustified crackdowns. In all cases, the government is obliged to declare what evidence it has proving the Muslim Brotherhood's involvement in terrorist activities and their ties to other terrorist groups."

Meanwhile, an official statement published by the Free Egyptians Party, one of the most powerful post-2011 political parties in Egypt, said that the party "views the decision to list this gang [the Muslim Brotherhood] among the world's terrorist organization as an important step on the road to cleansing Egyptian society of the ideologies on which this group was built."

The Muslim Brotherhood movement has been outlawed in Egypt at various points in time, but the decision of Dec. 25 was the first to list the Arab world's most powerful organization as a terrorist group. This decision may clear the way for several Arab states to pursue and crack down on other branches and offshoots of the Brotherhood.

Eissa's declaration that "Arab member states of the 1998 counterterrorism treaty would be informed of Egypt's decision" means that the majority of the Arab League member states would have a legal justification to intensify their pursuit of Muslim Brotherhood businesses, assets, members and affiliates.

"With the exception of Qatar, which is paying homage to the Brotherhood at all times, the majority of the Arabian Gulf states will help Egypt further crack down on the movement. Saudi Arabia, Kuwait and the United Arab Emirates will be the first to endorse Egypt's decision," said Omar al-Hassan, chairman of the independent London-based Gulf Center for Strategic Studies.

"Those countries will support the decision as much as they supported Morsi's July 3 ouster. Such countries have been deeply troubled by the Brotherhood's failure in office and the outbreak of violence across Egypt that followed their rise to power," Hassan added.

Hassan believes that this will be a very similar case to Bahrain's March 2013 declaration of Hezbollah to be a terrorist organization, which was followed by the agreement of several Gulf states and led to freezing the assets and stifling the activities of the Lebanese organization across the region.

"If this decision is legally activated through an official Arab League summit, it will have major impacts that will leave the Muslim Brotherhood with very few countries to operate through, and Egypt, at this point and under such regional conditions, is extremely capable of garnering the support of Arab states," Hassan said.