Having cracked down heavily on dissent, Egypt’s ruling authorities are angered by the former vice president’s interview on a Qatari TV channel that is perceived by the Egyptian government as being hostile toward Egypt. 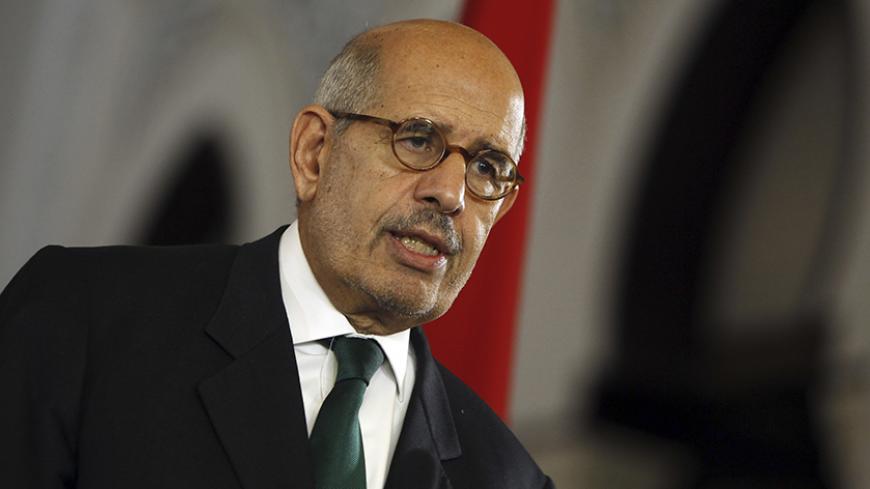 Egypt’s former Vice President Mohamed ElBaradei gave a rare TV interview to the Qatari Al-Araby network on Jan. 7, sparking controversy at home and drawing a furious backlash from government-loyalist media in the country.

The much-publicized interview (the first in a five-part series) was condemned by some Egyptian media even before its broadcast, signaling skepticism about ElBaradei’s intentions. In an article lambasting the former politician, the pro-government Al-Mogaz news site speculated that ElBaradei would use the airtime “to attack Egypt.” Al-Mogaz raised questions about the timing of the interview, which coincided with protests against Egypt’s handover of two Red Sea islands to Saudi Arabia and came just weeks ahead of the anniversary of the 2011 mass uprising that forced former President Hosni Mubarak to step down.

“The former head of the Atomic Energy Agency is seeking to sow discord and stir chaos in the country,” warned the news site.

ElBaradei, meanwhile, sought to allay such concerns, explaining at the onset of the interview that he had chosen to speak out about political and economic issues because his advice was needed at this time of crisis when the Arab world was heading toward self-destruction.

Serving as Egypt’s vice president on an interim basis from July 14, 2013, until he resigned a month later to protest the violent dispersal by security forces of a pro-Muslim Brotherhood encampment at Rabaa Square in the northeast Cairo suburb of Nasr City, ElBaradei has been living in exile in Austria for more than three years and has rarely spoken to the media.

Breaking his silence in the first episode of the TV show “Another Face of the Story,” the Nobel laureate who served as director general of the International Atomic Energy Agency, spoke of his role as a member of Egypt’s UN delegation during the 1967 Arab-Israeli war and as a diplomat in the Foreign Service during the signing of the Camp David peace accords. In future episodes, he is expected to spell out his vision vis-a-vis the political and economic situation in Egypt, a move that will likely provoke the ire of Egypt’s ruling authorities who have shown extreme sensitivity to criticism of their policies.

ElBaradei gave his interview to a channel perceived by the Egyptian government as being “hostile” toward Egypt because of the country’s tense relations with Qatar over Qatar’s continued support of the Muslim Brotherhood — now outlawed in Egypt. This has opened a Pandora’s box, prompting pro-government TV talk show host Ahmed Moussa to broadcast on the private Sada El Balad channel several leaked private telephone calls ElBaradei had purportedly made in the early months after the 2011 revolution. It also elicited a sharp response from lawmaker Mostafa Bakri, who has since submitted a request to the Egyptian parliament to revoke ElBaradei’s citizenship for his alleged “incitement against the Egyptian state” and "defamation of state institutions.” Bakri also demanded that Egypt’s highest Order of the Nile decoration, which the Nobel laureate received in 2006, be withdrawn.

In one of the leaked phone conversations, ElBaradei lashed out at Egyptian media figures for their “turnabout” after the revolution. He told an unidentified woman on the other end of the line that many of those who had stood against the Egyptian revolution were now pretending to be revolutionaries. In another leaked conversation with his brother Ali, ElBaradei expressed his frustration with the youth revolutionaries for failing to reach consensus on the way forward for the country, calling them “imbeciles.” He also expressed disdain for several prominent opposition figures, including leftist Hamdeen Sabahi (a candidate in Egypt’s first presidential election after the revolution and in the 2014 presidential race) and politician Amr Moussa, describing them as “hypocrites” and “lacking in credibility.” In a leaked conversation with prominent TV talk show host Ibrahim Eissa, ElBaradei criticized the Supreme Council of the Armed Forces, which oversaw Egypt’s turbulent transition after the fall of Mubarak, as “backward” and “lacking experience in managing the affairs of the country.”

Ahmed Moussa also broadcast a leaked phone call that ElBaradei had purportedly made to Lt. Gen. Sami Anan, then-chief of staff of the Egyptian Armed Forces, in which he was heard relaying some of the demands of the revolutionary youth coalition to the senior military general. “The youth insist on a Cabinet reshuffle,” he said, adding that they could not accept a former regime man as the head of government, in reference to Ahmed Shafik who had been appointed as prime minister by Mubarak in response to the 2011 mass protests. Shafik had remained in office for only one month, resigning on March 3, 2011, so the telephone call was likely recorded during that time.

While Moussa did not reveal how he had obtained the taped calls, he defended his actions, saying, “It is the right of Egyptians to see the real face of the leaders of the revolution” who, he insisted, would have driven the country to ruins.

In response to the leaked calls, ElBaradei tweeted his indignation, lamenting the fact that his private conversations with family had been “wiretapped, doctored & aired on TV as political retaliation.”

“Legality aside is there any trace of decency left?" he asked.

The leaks sent shockwaves through society, angering Egyptians and fueling fears that their private communications, too, were being monitored by the country’s security agencies and could be shared publicly at any moment. In an op-ed titled “A Scandal for the Entire Nation” published (surprisingly) in the pro-government Al-Mogaz news site on Jan. 8, editor Essam Kamel denounced the leaked calls as “unconstitutional” and warned of “dire consequences” of such acts. The Egyptian constitution protects the privacy of citizens’ personal communications. Article 38 states that the private life of citizens is inviolable: Telephone calls, postal and electronic correspondence, wires and other means of communication may not be confiscated or monitored except by judicial warrant for reasons of national security.

“Can scandalizing citizens be seen as a victory for the security agencies?” Kamal asked, adding that broadcasting the calls was childish behavior unbefitting a nation of Egypt’s standing.

His words, however, have fallen on deaf ears, with Moussa vowing to continue broadcasting even more of ElBaradei’s private conversations in the coming weeks. Since the overthrow of Islamist President Mohammed Morsi in July 2013, the Egyptian authorities have cracked down heavily on dissent, jailing tens of thousands of political opponents and violating constitutional rights in the name of national security and the ongoing war on terrorism. It is unlikely that the trend will be reversed anytime soon. If anything, analysts expect the government to clamp down even harder on political opponents in the weeks leading up to the anniversary of the January 25 uprising.

In a previous comment posted on his Twitter account on July 26, 2013, ElBaradei had advised that “non-violence, rule of law and due process are key principles to adhere to at this difficult time.” It may be wise for Egypt's leadership to heed the advice. Respecting the constitution would be a good first step in that direction.