How Egypt's government is responding to calls for election boycott

Opposition groups are calling for a boycott of the March presidential elections after all would-be contenders were either jailed, prosecuted or intimidated out of the race. 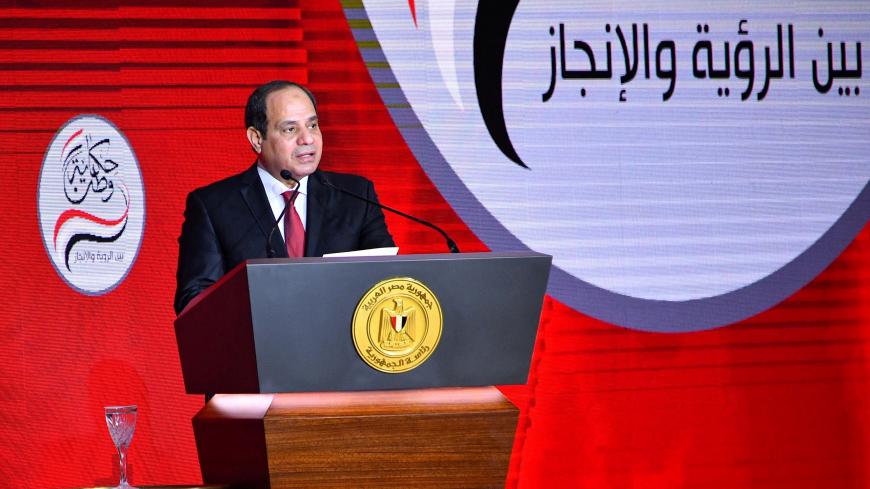 Egyptian President Abdel Fattah al-Sisi speaks during the closing session of "Tale of a Homeland" conference and announces intention to run for a second term, Cairo, Egypt, Jan. 19, 2018. - The Egyptian Presidency/Handout via REUTERS

Egyptians will head to the polls March 26-28 to cast their votes in a presidential election that critics in and outside of Egypt have branded a "sham." Political analysts say the election is a mere formality, since President Abdel Fattah al-Sisi is guaranteed a second term in office after eliminating would-be rival candidates from the race.

In recent weeks, all serious candidates have either been arrested, prosecuted or intimidated out of the race, leaving Sisi to face a sole “challenger,” who ironically is a staunch Sisi supporter. Moussa Mustafa Moussa, the rival contender in question, is a little-known politician who heads the centrist Al Ghad Party. Moussa’s 11th-hour participation in the race is widely perceived as a face-saving effort to legitimize the election and spare Sisi the embarrassment of a one-candidate referendum.

Sami Anan, the former armed forces chief of staff and presidential hopeful, was the last major challenger to Sisi before being arrested on charges of forgery, inciting against the army and running in the election without seeking prior permission from the military. Anan’s right-hand man in the campaign, former top auditor Hisham Geneina, was physically assaulted by knife-wielding thugs outside his home in what his lawyer and family members claimed was a failed kidnapping and assassination attempt. Geneina later revealed that he had been on his way to appeal the disqualification of Anan from the election when he was attacked.

Alarmed by the brutal crackdown on the would-be opposition candidates, Egyptian opposition leaders held a press conference to call for a boycott of the election, which they described as a “farce" and an "absurdity.” The opposition leaders — members of the Civil Democratic Movement, a coalition of seven leftist and liberal parties and 150 pro-democracy activists — defiantly urged voters to stay home rather than participate in a "charade." Leftist politician Hamdeen Sabahi, who ran against Sisi in the 2014 elections, insisted the election be called off.

"There are no candidates, no guarantees of a free and fair vote, and no freedom," he said.

Former member of parliament Mohamed Anwar Sadat, who had announced his intention to contest the election but later rescinded his decision, cited an “unsuitable” political environment that is hostile to “genuine competition.” He proposed a national dialogue to defuse the crisis.

Rights lawyer Khaled Ali, another would-be presidential hopeful, also quit the race a day after Anan was arrested by the military, telling supporters at the press conference that "the opportunity for hope in this presidential election has gone." He complained that members of his campaign had been arrested or faced harassment.

Clearly angered by the opposition's calls for a boycott of the vote, Sisi sternly warned he would take strong action against "anyone who believes he can mess with [Egypt’s] security,” threatening he would not tolerate a repeat of the events that happened seven years ago (in reference to the uprising that forced Hosni Mubarak to step down). Speaking at the opening of an offshore gas field, Sisi vowed to demand a popular mandate from Egyptians to oppose what he deemed “the evil people."

While it was unclear who Sisi was referring to as being evil, analysts believe he may have been talking about dissenters, often portrayed by the pro-government media as being enemies of the state and seeking to disturb public order and spread chaos.

Mohamed Abul Ghar, the founder and chairman of the liberal Social Democratic Party, denied that the opposition was seeking to destabilize the country. "We neither want to destroy government buildings nor disrupt economic growth. We support Sisi in his efforts to root out the terrorists, but the way the authorities have handled the presidential election so far has left us deeply concerned," Abul Ghar told Al-Monitor.

"We all knew Sisi would seek a second term. We also know that the result of this election is a foregone conclusion. But in a free and fair election, Sisi would have definitely won. The recent crackdown on opposition candidates was uncalled for and only discredits the regime," he said.

Concerned that Egyptians would heed the opposition's calls to stay away from the ballot box — a low voter turnout would prove an embarrassment for Sisi and undermine the credibility of the election — the authorities are using all means possible to coax the public to participate in the March elections. Placards on all the major roundabouts and on street corners bearing Sisi's picture tell Egyptians that they must vote "to ensure that the country remains stable and secure." Public service messages broadcast on the radio warn of "foreign conspiracies to destroy the state" and exhort Egyptians to vote "to counter the foreign plots." In other public service messages, Egyptians are told to participate in the election "so as to avert civil war and bloodshed on the streets." The radio spots are clearly an attempt to terrorize the public into submission.

Presidential hopeful Moussa has meanwhile threatened to prosecute anyone who boycotts the vote if he wins the election. In an interview broadcast on the pro-government channel DMC, he said, "If I were to win, I would bring to trial the boycotters on the charge of high treason."

"Such calls incite foreign countries against Egypt and can only harm Egyptians," he said.

Any doubts Egyptians may have had about the threats being sincere were quickly dispelled when lawyer Mohamed Hamid Salam filed a legal complaint against 13 opposition figures who were among those who called for the boycott. He accused them of “attempting to overthrow the regime,” "incitement against the state" and "trying to destabilize the country."

Khaled Dawoud, the head of the liberal Al-Dostour (Constitution) Party and one of the boycotters, dismissed the allegations against him and the other members of the Civil Democratic Movement as "baseless lies." In comments published on his Facebook page, Dawoud said that his prosecution is "part of a growing number of court cases against opposition figures filed by lawyers seeking fame and visibility. The pro-government media publicizes the cases with the aim of defaming those accused." Dawoud also said that he failed to understand why the attorney general had not shelved the complaint and had referred the case to the prosecutors. "I still have hope, however, that the case will be shelved as I have not as yet been summoned for interrogation," he wrote.

Egyptian lawmakers have also joined the chorus of condemnation of the opposition's boycott campaign. The move is unsurprising considering that 508 out of the 596 members of parliament had endorsed Sisi's re-election for a second term. In a statement released by the Mostakbal Watan (Future of a Nation) Party, the second-largest party in parliament, the members of parliament said the boycott “serves foreign agendas,” adding, “The Egyptian people face dangerous challenges. We must stand behind the state in order to foil plans aimed at impeding our progress."

In similar remarks on his talk show on the pro-government Sada El Balad channel, member of parliament Mostafa Bakry also warned that "the coming days will be crucial for Egypt."

"We must stand together to confront the foreign plots and defend our nation. There is no going back to the past," he said sternly, wagging his finger at the camera.

Only a handful of opposition lawmakers disagree. In a statement reported by Ahram Online, member of parliament Haitham El-Hariri, who hails from the opposition 25-30 bloc, said that boycotting is not “treason” and is a legal and constitutional right on par with the right to vote.

Religion, too, is being used to woo voters. Speaking to reporters on the sidelines of a conference on "Confronting Terrorism and Extremism," Minister of Religious Endowments Mohamed Mokhtar Gomaa said that participating in elections is "a religious duty" and "a patriotic act."

But Abul Ghar argued that such statements are counterproductive and will do little to reverse the current state of apathy on the street. "If the regime had allowed for pluralistic elections, disaffected citizens may have been encouraged to vote. Now, just as in the pre-revolution days, people feel their vote won’t make a difference, and so, the majority will opt to stay home.”