Signatures are being collected to lift constitutional restrictions on Egypt's presidential term limits and give Sisi more time to "implement the projects he started." 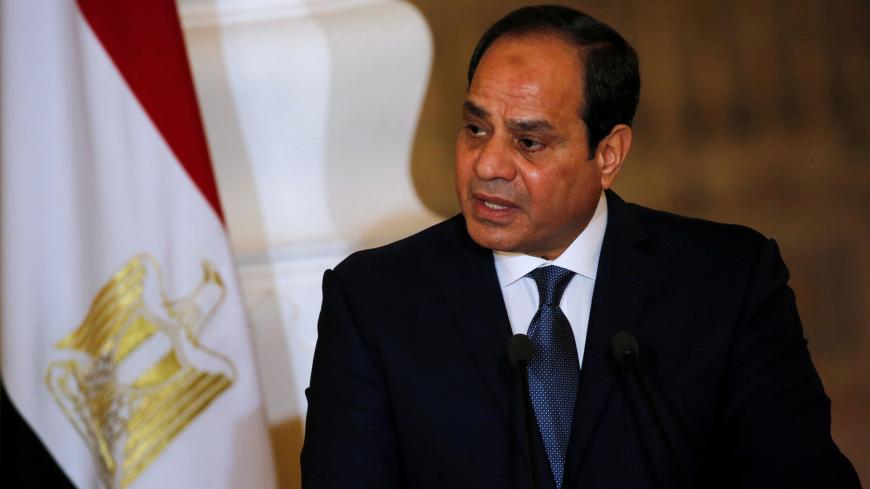 Calls by some Egyptian lawmakers to amend Article 140 of the Egyptian Constitution to extend the current four-year presidential term by two years have sparked controversy in Egypt, with some members of the pro-government parliamentary majority bloc, “In Support of Egypt,” throwing their weight behind the idea, while critics have lambasted it as a “sign of political immaturity.”

On Aug. 6, Ismail Nasreddine, a hitherto little-known parliament member representing Helwan — a district south of Cairo — began collecting signatures for the motion to lift restrictions on President Abdel Fattah al-Sisi's re-election. He argued that “four years is not long enough to allow President Sisi to implement the projects he started.”

Speaking to Al-Monitor, Nasreddine echoed earlier comments by parliament Speaker Ali Abdel Al that the 2014 constitution was written at a time of “instability” — a reference to the protests by supporters of ousted Islamist President Mohammed Morsi that took place in the wake of his removal from office in July 2013 — but that “circumstances have changed since, necessitating amendments to the charter.”

“The constitution is man-made; it is not the word of God,” he said, adding that “people make mistakes and those mistakes ought to be corrected.”

Nassredine also wants several other articles amended, including the provision giving parliament the final word on Cabinet appointments and dismissals. “What if the president decides to dismiss a Cabinet minister but parliament does not support his decision? This would put the president on a collision course with the parliament. The president should be able to make such decisions without having to seek approval from the assembly,” he said.

But not everyone agrees. In comments posted on his Twitter account Aug. 12, veteran politician and former presidential candidate Amr Moussa — who chaired the panel of experts drafting the 2014 constitution — expressed his objection to Nasreddine's plan.

“Renewed talk about amending the constitution in a presidential year raises questions about the maturity of the political thought behind it,” he wrote, adding that “the parliament should focus instead on implementing the charter.”

The constitution, adopted with an overwhelming majority in January 2014 and hailed by some analysts as “possibly the most progressive in the country’s history,” has repeatedly been violated, much to the chagrin of rights advocates and groups. Gamal Eid, the founding chair of the Arab Network for Human Rights Information, an Egyptian rights nongovernmental organization, cited the arbitrary arrests of citizens without charge and the prolonged pretrial detentions of some political prisoners — often exceeding the two-year limit allowed for by the constitution — as “flagrant violations of the charter.” Article 139 of Egypt’s criminal procedure code states that “those arrested or held in custody must be immediately informed of the reasons for their arrest.”

“Furthermore, detainees are sometimes held in unknown locations for extended periods — another grave violation of the charter,” Eid said, in reference to the hundreds of forced disappearances reported in Egypt since early 2015. In a damning report published in July 2016, Amnesty International said Egypt’s National Security Agency was “abducting, torturing and forcibly disappearing people in an effort to intimidate opponents and wipe out peaceful dissent.”

Other rights groups have denounced the government’s crackdown on free speech and the increased restrictions on media freedom, including the blocking of more than 100 news websites critical of the regime since May. “The blocking measures — evidence that the authorities tolerate only the voices that support the regime and are silent about its serious rights abuses — run counter to the 2014 constitution,” Article 19, a nonprofit organization defending freedom of expression, said in a written statement published May 30.

Freedom of the press — whether print, visual, audio or electronic — is guaranteed by the constitution, which also prohibits censoring, confiscating, suspending or shutting down newspapers and media outlets.

Nasreddine’s proposal has largely met with stiff opposition, including from staunch regime loyalists such as parliament member Mostafa Bakry, who rejected it saying he doubts Sisi would agree to amending the charter. Some analysts have said it is merely a trial balloon designed to gauge Sisi’s popularity ahead of next year’s presidential vote.

An October 2016 survey conducted by the pro-government pollster Baseera revealed a plunge in Sisi’s approval ratings — falling 14 percentage points from ratings two months earlier — owing mainly to soaring prices and rampant inflation prompted by the harsh economic reform measures undertaken by the government to secure a $12.5 billion International Monetary Fund loan. An ongoing Islamist insurgency in north Sinai that has killed hundreds of security forces since the July 2013 coup has in recent months spilled over into the mainland, where a surge in terrorist attacks targeting Egypt’s Coptic Christians has fueled discontent in the country’s religious minority that in the 2014 presidential election helped propel Sisi to power. Moreover, the authorities’ decision last year to transfer two Red Sea islands to Saudi sovereignty sparked rare protests — a clear manifestation of the growing popular disillusionment and outrage. Such “failures” have turned some of Sisi’s former allies into critics, prompting louder calls for his replacement in the next presidential election slated for next year.

And while Sisi has yet to declare that he will run for a second term, his candidacy remains largely unchallenged. Only two potential rivals — rights lawyer Khaled Ali and former parliament member Mohamed Anwar El Sadat — have expressed interest in contesting the election but only half-heartedly.

Expectations are low, however, that the future candidates stand a real chance of winning, as observers acknowledge that despite Sisi’s shrinking popularity, he is still widely perceived as a force for stability. After six years of political tumult since the 2011 uprising that toppled President Hosni Mubarak, many Egyptians are weary and willing to put up with the difficult economic conditions because they are afraid that further upheavals may plunge the country into chaos. Mohamed Abul Ghar, the co-founder and former leader of the liberal Social Democratic Party, told Al-Monitor that the government’s harsh security crackdown on dissent has spread fear and intimidation, wiping out any real opposition. “No one will dare run against Sisi for fear of being jailed on trumped-up charges. Moreover, with security agencies now in full control of the media, rival candidates will not be given equal opportunities to disseminate their messages through the various media outlets that are all toeing the state line,” he said. “The current dismal conditions guarantee another landslide victory for Sisi."

Abul Ghar rebuffed the idea of the constitutional amendment to extend the president’s term to six years, saying that “the Egyptian voters elected Sisi for a four-year term. If he chooses to stay in power longer, the decision would delegitimize his rule.”

When parliament convenes in October after the summer recess, Nasreddine would need the support of 20% of lawmakers to begin consideration of a discussion on the issue in the assembly. A two-thirds majority vote would then be required to push the proposed amendment through parliament before it is put to a vote in a referendum.

But Abul Ghar is skeptical that the Egyptian electorate will indeed decide whether to accept or reject the revision. “This is a done deal,” he said. “The [parliament members] who proposed the amendment could not have done so of their own accord. They are simply following the regime’s dictates.”