Is Sisi vying to stay on as president?

News is circulating in the media about constitutional amendments that would allow Egyptian President Abdel Fattah al-Sisi to remain in power for additional years or head a constitutional committee. 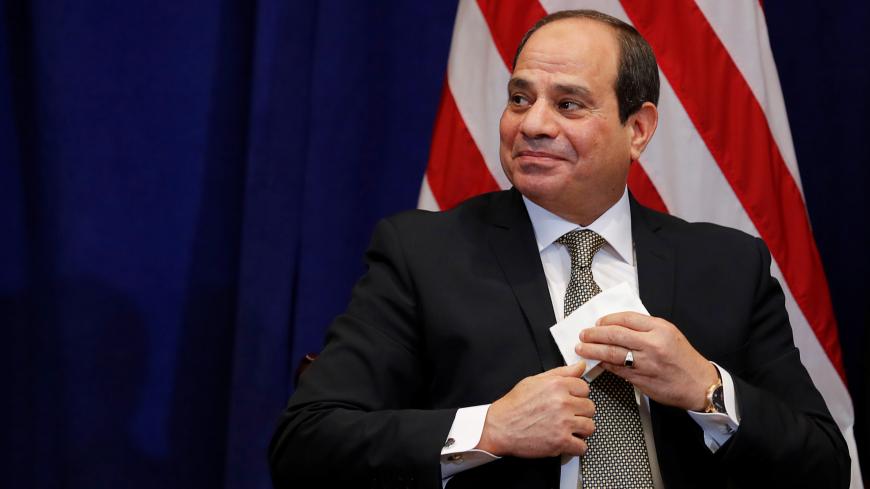 Mada Masr cited Nov. 22 sources — which the website claimed were from the General Intelligence Service, parliament and the presidency — saying on condition of anonymity that the amendments aim at extending Sisi’s current term, without specifying the number of years that the amendment asks for.

According to the sources, the proposed amendments would effectively grant Sisi immunity from any decisions made by any future president, since one proposed amendment grants him a life-time appointment as head of a “High Council for the Protection of the Constitution." This council, proposed under the new amendments, would be given wide-ranging powers to protect national identity, national security and the constitution. These powers that are broadly defined would allow the council to block any decision by the president or parliament, especially if the president or any parliamentary bloc opposes the regime in place.

The amendments have yet to be officially submitted to parliament for discussion, but the sources told Mada Masr they would be submitted in the first quarter of 2019. After approval by two-thirds of parliament, the amendments would be put up to vote at a national referendum.

Al-Araby Al-Jadeed stated Dec. 3 that the amendments aim at keeping Sisi as president until 2040, by specifying the renewal of the presidential term twice instead of once. Each presidential term would consist of six instead of four years. A transitional article allows all former Egyptian presidents who were in office before the constitutional amendments, including Sisi, to run again.

Most supporters of the constitutional amendments are affiliated with the parliamentary majority bloc, Support Egypt, which is close to Sisi. On Nov. 4, parliamentary spokesman Saleh Hasballah told Ahmed Moussa, host of "Ala Mas’ouliyati" on Sada el-Balad satellite channel, that, as an Egyptian citizen, if he was asked to amend the constitution in a referendum, he would accept.

He said, “Why are there fears of amending the constitution as long as willpower is in the hands of the people who are considered a source of authority?”

The parliamentary majority seems to favor extending Sisi’s term through constitutional amendments; however, the majority's position over the formation of a supreme council to protect the constitution — similarly to the Iranian Guardian Council of the Constitution — remains unknown.

Ismail Nasreddin member of the parliamentary Housing Commission, told Al-Monitor that he submitted a demand to parliament to discuss amending the constitution to extend Sisi’s term several times, but he never proposed establishing a council for the protection of the constitution.

Parliament preferred to postpone the discussion because the issue is thorny. However, the majority is expected to side with the amendment, he said.

Nasreddin added, “We do not need such a council [to give Sisi the authority] to protect the constitution because the previous elections have shown Sisi’s popularity, which will push many Egyptians to agree to extend the presidential term in the constitutional amendments. The current constitution dates to 2014 under different circumstances that do not resemble the current economic, security and political crises in the country or the expansive development plans. They must be completed, and Sisi is the only guarantee for that.”

Still, many members of parliament oppose the amendment, including parliamentarian Haitham al-Hariri who is part of the 25-30 majority opposition bloc. He told Al-Monitor, “I believe the constitutional amendments are rejected by most Egyptians. And if a true democratic referendum on the amendments is held, I think the majority would oppose them given Sisi’s dwindling popularity.”

A parliamentary source from Support Egypt told Al-Monitor on condition of anonymity that the alliance unanimously supports Sisi and backs all his security, economic and political decisions. However, the coalition did not come to a final decision in regard to the constitutional amendments.

The source noted that these members of parliament, including former leader of Support Egypt Mohammed al-Suwaidi and current leader Abdul Hadi al-Qasabi, delayed discussions until further notice, when the amendments were first proposed in 2016 and 2017. Many citizens were reluctant to constitutional amendments and their risk on alternation of power.

The source noted that the constitutional amendments — whether on extending the presidential term or creating a constitutional council — are not up for official discussion in parliament or in the ranks of the coalition. The news agencies are just spreading rumors aimed at causing a buzz or are speculating. No official bill for constitutional developments will be proposed before 2020 or 2021, “when Sisi’s vision regarding development and the security state becomes clearer. Only then will we know whether there is a national need for Sisi to remain in office or if there is a substitute who can perpetuate Sisi’s gains,” the source explained.

The head of Al-Karama Party and member of the 50-member committee that drafted the constitution in 2013 and 2014, Mohamed Sami, told Al-Monitor that the current amendment is useless because the constitution has only been functional for less than five years and cannot be judged yet.

Sami said the people’s approval of the amendments during any referendum depends on the president’s popularity and the public’s view on how his policies affect their social and economic conditions.

A source close to Amr Moussa, the head of the 50-member committee, told Al-Monitor on condition of anonymity, “Moussa does not favor amending the constitution for the same reasons that Sami stated. Moussa does not expect parliamentarians or parties to amend the constitution, because it [the constitution] gave them the opportunity to preserve the gains of Sisi’s projects by forming a government that Sisi himself can head, if they so wished, even in the presence of another president. They can even form a party or presidential group led by Sisi but supporting another candidate, which allows Sisi and his policies to remain present for a long time under constitutional ways, without the need to extend the president’s term or form a constitutional committee.”