Proposed amendments to the constitution would allow the current president to remain in office until 2034. 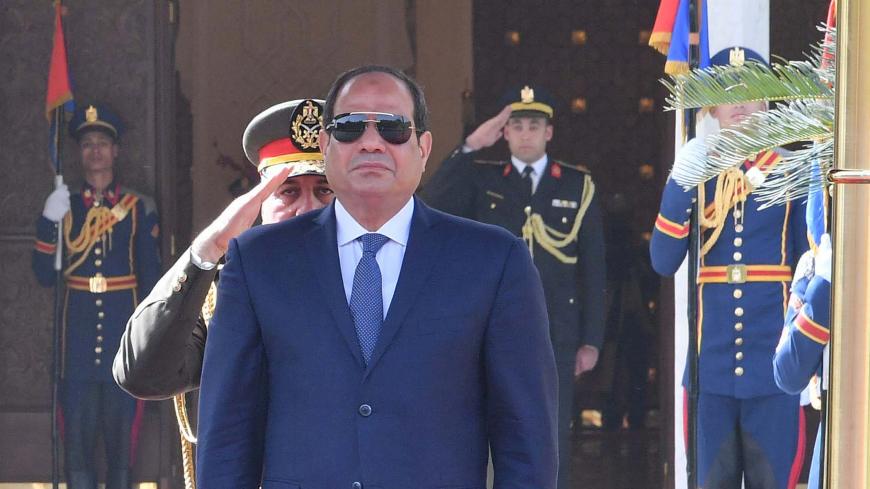 Egyptian lawmakers have proposed changes to Egypt's constitution, including amendments to expand the military's powers and to allow President Abdel Fattah al-Sisi to remain in office following the end of his second term, and potentially until 2034. The amendments have sparked controversy in the country, drawing mixed reactions from members of parliament, analysts and activists.

The suggested alteration to Article 140 of the constitution would extend presidential terms from four to six years, and changes to Article 200 would allow the military to ensure "that the principles of the June 30 Revolution are observed," which means preventing Islamists from ever rising to power. The amendments are being packaged with progressive changes, to make them more palatable to the public.

Sisi's supporters praised the amendments, arguing that "four years are not enough" and that the president needs "more time to complete the development plans that he started," while critics decried the changes as an "Arab Spring in reverse" and "a coup against the Egyptian Constitution."

Though the two-term limit would remain in place for future presidents, these changes would reset the clock for Sisi, allowing him two additional terms after his current one ends in 2022.

Hassan Nafaa, a professor of political science at Cairo University, warned on Twitter that the changes signal "the start of a major political battle between a people aspiring for freedom, social justice and human dignity and a ruler determined to remain president of Egypt for life."

The constitutional changes were spearheaded by deputies from the pro-Sisi Support Egypt coalition. Surprisingly, in addition to the presidential term extension, the amendments also include some unfulfilled aspirations of the revolutionary activists who took to the streets in 2011 demanding democratic change, like: the appointment of a vice president; a quota guaranteeing at least a quarter of parliament's 596 seats go to women; and "adequate" parliamentary representation for youth, workers, farmers and Christians. Yet other amendments would boost the president's control of the judiciary, allowing him to appoint judges and the public prosecutor. The head of state would also be entitled to reshuffle the Cabinet without parliament's approval. Furthermore, the president would be empowered to appoint one-third of the members of a second parliamentary chamber, or the so-called Council of Senators.

Critics denounced the amendments as "a consolidation of Sisi's powers" and an attempt "to enshrine an authoritarian government." Members of the opposition 25-30 parliamentary bloc, which comprises the civil democratic movement and independents, also objected to the planned amendments, describing them as "a continuation of the dictatorship."

"We were naive to think they would only extend the presidential term limits," Haitham El Hariri, a member of the opposition parliamentary bloc, told Reuters.

Khaled Youssef, another opposition member of parliament, rejected the changes, despite anticipating a "fierce backlash" for his stance.

"I know that my continued objection to the constitutional amendments may land me in prison on trumped-up charges, but I'm willing to pay the price and face the repercussions, no matter how harsh they may be. Those opposing the amendments will likely face intimidation to silence them," he wrote in a Facebook post.

Mohamed ElBaradei, a former diplomat who briefly served as vice president in the 2013 interim government, lambasted the authorities in condescending remarks on Twitter on Feb. 5.

"Are we so ignorant that we fail to understand that the constitution is a mutual contract among all parties and not one of submission imposed by one party on another?" he wrote. "Have we not yet realized that disputes over the constitution since 2011 are partly to blame for our dismal state of affairs? Are we so stupid as not to learn from our bitter experiences that a controversial constitution often spells the end for its creators?"

The Arabic hashtag #NoToChangingTheConstitution, meanwhile, became the top trending hashtag in Egypt on Feb. 3, after being shared by more than 14,000 people.

Sisi's Nov. 17 pledge to respect the constitution and refrain from running for a third term was widely shared by activists on social media networks, often with snide remarks.

The activists also used humor to vent their frustrations. A widely circulated joke on social media suggested that the president remain in power for life and that elections be held every four years to change the electorate instead.

Defending the planned amendments, chairman of the pro-government al-Akhbar newspaper, Yasser Rizq, wrote in an op-ed that the 2014 constitution was "badly in need of an overhaul." The overdue political reforms will preserve the people's gains in security, stability and economic recovery, he said.

Mustafa Bakri, an independent member of parliament, argued that the current constitution was drafted "under heavy international pressure," citing Article 241 on transitional justice as an example. "That article was drafted to pave the way for future reconciliation with the Muslim Brotherhood," he told the English-language Ahram Weekly, insisting there would be no rapprochement with the Muslim Brotherhood, designated as a terrorist group by Egypt.

"No articles of the constitution are sacred or untouchable," he said. The constitution "is a document meant to protect people's rights and govern their relations with the state and its institutions. It can be subject to change with the changing circumstances on the ground." He also recommended that a referendum be held to decide on each amendment separately, rather than putting all the changes to a popular vote as a package.

The government is turning a deaf ear to public criticism of the proposed amendments and Rizk predicted that by late summer 2019, the constitution will likely have already been altered. Mustapha Kamel El Sayyed, a professor of political science at Cairo University, offered a plausible explanation for the authorities' intransigence on the matter. "Sisi does not want to step down while he is alive; he fears that he could be held to account if he leaves office," he said.