As Egypt’s parliament voted in favor of constitutional amendments that would allow President Abdel Fattah al-Sisi to remain in power until 2034, parliamentarians who opposed the decision seem to have been victims of defamation campaigns. 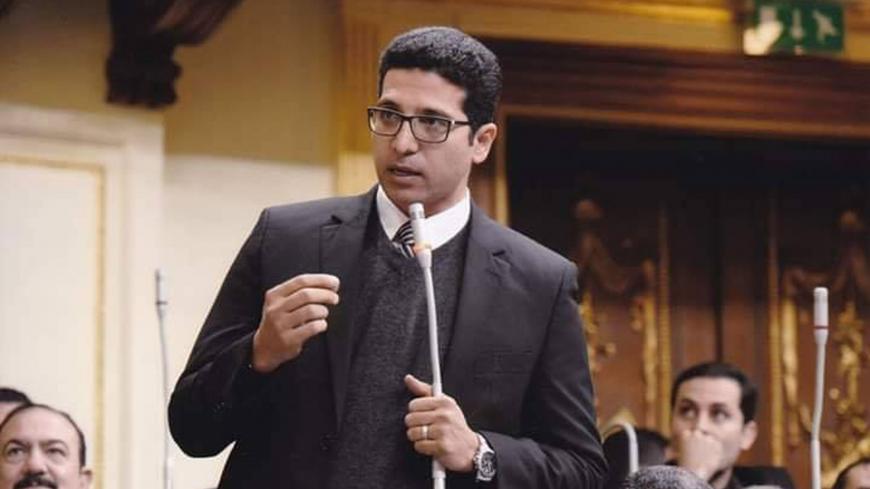 The Egyptian parliament approved Feb. 14 a draft constitutional amendment submitted by members of parliament of the pro-regime Egypt Support Coalition earlier this month. The amendments include one that would ensure President Abdel Fattah al-Sisi remains in power until 2034 by extending the current four-year presidential term to six years and abolish the current two-term limit.

The amendments are due to be approved by the parliament’s Constitutional and Legislative Committee for discussion, although no date is yet scheduled, before they would be put up to a referendum so they can enter into force.

The amendments coincide with leaked sex tapes and lawsuits targeting politicians who rejected the amendments in an attempt to pass them “as soon as possible without any obstacles,” a member of parliament for the pro-regime Egypt Support Coalition and member of the committee told Al-Monitor on condition of anonymity.

Haitham al-Hariri, a parliamentarian for the 25-30 bloc, representing the minority opposition in parliament, who had previously rejected the amendments, posted on his Facebook page Feb. 11 a message for Egyptians to support the amendments. He said that if parliament approved the amendments, it would be the ultimate form of “practicing democracy,” calling on citizens to vote in the referendum on these amendments.

Hariri’s post sparked outrage among his followers, who commented on how he changed his position since a phone call in which he used sexual connotations went viral on Feb. 8.

Meanwhile, pro-state media praised his post, stressing that Hariri had “corrected his position” on the amendments and now supports passing them.

According to the constitutional amendments, Sisi will also have the right to appoint heads of courts and judicial councils and form a Supreme Judicial Council that he heads himself. The amendments also propose adding to the military establishment’s duty the protection of “the constitution and democracy and the fundamental makeup of the country and its civil nature.” In addition, the amendments include forming a Shura Council, allocating a 25% quota for women in parliament and ensuring representation for Copts, farmers and workers.

Hariri now faces an intense defamation campaign. Lawyers Samir Sabri and Tariq Mahmoud filed two lawsuits against Hariri on Feb. 12-13, before the Administrative Court of Justice to drop his membership in parliament, given the inappropriate sexual innuendos in the leaked phone call.

Meanwhile, lawyer Mohammad Salem filed another lawsuit against him, accusing him of inciting sexual violence and sexual harassment via phone.

However, filmmaker and parliamentarian Khaled Youssef, who also opposed the amendments, finds himself in a worse situation. Egyptians have been preoccupied since mid-January with dozens of sex tapes involving Youssef and several women, including two actresses. Media outlets reported that the clips were initially shared by activists and parliamentarians through WhatsApp groups.

On Feb. 7, police arrested two female artists who appeared in some of these clips, accusing them of inciting debauchery and public indecency.

Lawyers filed several lawsuits before courts and called on parliament Speaker Ali Abdel Aal to revoke Youssef’s parliamentary membership. On Feb. 18, the Administrative Court of Justice set a hearing for March 16 to consider the case filed by Sabri to remove Youssef from parliament.

“Anyone who says no [to the amendments] has to pay for it by being the target of defamation,” Hariri told Al-Monitor, noting that he was also the victim of such defamation campaigns.

Such campaigns bring to mind "The Black Box," a TV program hosted by Abdel Rahim Ali that aired in 2014-15 on Al Kahera Wal Nas channel, which the Egyptian authorities supported. During each episode, the program would reveal private phone calls by revolutionary activists and Muslim Brotherhood leaders.

Spokesman for the opposing Civil Democratic Movement Majdi Abdel Hamid told Al-Monitor, “Defamation campaigns are aimed at blackmailing the opposition and deterring any voice that tries to call on citizens to reject these serious amendments.”

He added that the government is waging an “unfair war” by seeking defamation as it tries to deliver a message — “remain silent, or else you will face the same” — to all those who reject the amendments.

Abdel Hamid noted that the Civil Democratic Movement and the opposition parties will not be able to create a debate in the community regarding these constitutional amendments in light of the political repression and these defamation campaigns.

However, the parliamentarian from the Egypt Support Coalition said that the government wants to pass these amendments as soon as possible, noting that it does not accept any debate in society that could hinder passing these amendments.

The member of parliament admitted that the videos and sexual recordings of the two parliamentarians came at this time in order to prevent any attempts to create a community dialogue affecting the referendum on these amendments.

He explained that some of the articles proposed were “unconstitutional,” especially the article on the establishment of a Supreme Judicial Council headed by Sisi, who would also have the right to appoint heads of courts and administrative councils. He pointed out that this article contradicts the principle of separating powers provided for in the constitution.

The parliamentarian said that the articles for women and representation of Copts, farmers and workers aim at attracting the votes of these sectors during the referendum, underlining that the main objective of these amendments is to extend the rule of President Sisi.