The rare voices who spoke out against the push to extend the president’s term have faced a campaign of intimidation. 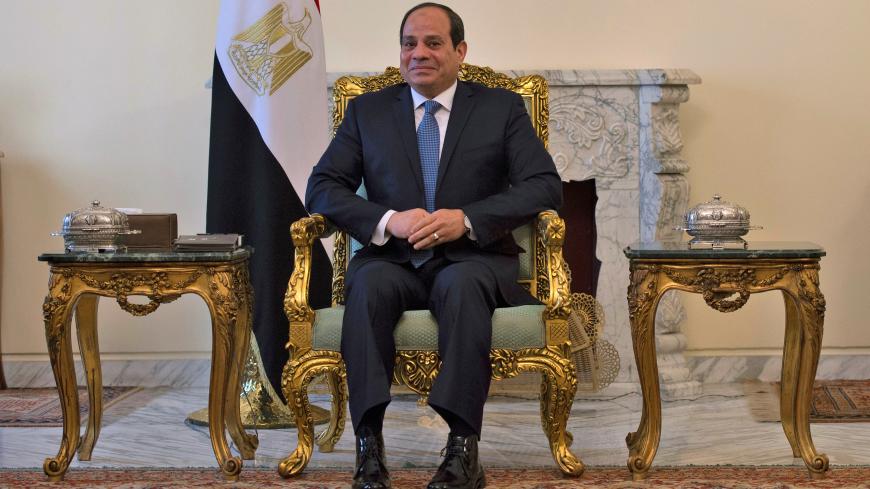 Egyptian President Abdel Fattah al-Sisi is pictured during his meeting with the US Secretary of State Mike Pompeo in Cairo, Egypt, Jan. 10, 2019. - REUTERS/Andrew Caballero-Reynolds

The Egyptian parliament on Feb. 14 overwhelmingly endorsed sweeping constitutional changes that include extending presidential terms from four years to six and exempting President Abdel Fattah al-Sisi from his current two-term limit. Some 485 out of a total of 596 lawmakers (more than 81%) in the House of Representatives voted in favor of proposed revisions that could allow Sisi to remain in power until 2034 and would expand the military's authority by allowing a council of military officers to "oversee the state."

The proposed amendments have been submitted to parliament's Legislative and Constitutional Committee for review before they are put to a national referendum that critics expect will likely be rigged in favor of the changes.

The news that parliament had given a nod to the controversial changes was largely met with apathy in Egypt. The country's civil society and political parties, weakened by years of political repression, had clearly resigned themselves to that outcome given that the bulk of the deputies are from parliament's majority "Support Egypt" bloc that had spearheaded the proposed revisions. It is a well-known fact that the lawmakers in Egypt's lower house were handpicked by the country's notorious security agencies to ensure that the laws passed are a rubber stamp for Sisi's decisions.

The subdued reaction to parliament's swift approval of the amendments is a far cry from the stiff resistance faced by President Mohammed Morsi when he attempted to pass a controversial decree that would have raised his edicts above judicial review in 2012. Although the Muslim Brotherhood-backed president had sought to allay the concerns of the opposition that the decree was temporary (lasting only until a constitution was approved), the fierce backlash he faced from the judiciary, civil society, leftist political parties and ordinary citizens forced him to quickly rescind his decision. The following year, Morsi was ousted by Sisi.

The situation is vastly different today: A spate of arrests and prosecutions of opposition figures has succeeded in intimidating most critics into silence. Filmmaker and member of parliament Khaled Youssef, who had expressed his rejection to the proposed amendments on social media, has reportedly been forced to flee the country for fear of arrest. This occurred after "scandalous" videos of the lawmaker were leaked on social media networks and picked up by the pro-government Egyptian media. The videos purportedly showing him engaging in sexual activity with multiple actresses went viral in Egypt this past week. They have also prompted the arrests of two young actresses who appear in one of the videos, on charges of blasphemy. If found guilty, the women risk three-year jail sentences.

Speaking to BBC Arabic from France, Youssef insisted that the leaked videos were part of a moral assassination campaign by the regime as punishment for his opposition to the amendments. Similar tactics have also been used to pressure Haitham al-Hariri, another leftist opposition member of parliament, into submission. Hariri had initially spoken out in parliament against the proposed amendments, warning that "tampering with presidential terms would create an authoritarian, despotic regime." But he made an abrupt turnabout after a telephone conversation he allegedly had with a married woman was leaked on social media. A pro-government lawyer filed a legal complaint against Hariri, accusing him of sexual harassment. The lawyer also called for Hariri’s parliamentary immunity to be lifted so he can be prosecuted on charges of "committing adultery." Bowing under pressure, Hariri retracted his earlier statements and wrote on Facebook that if the proposed constitutional changes are approved by parliament, then the process is "purely democratic.” He also urged Egyptians to vote in the upcoming referendum, adding that "we all have to respect the will of the people. Egyptians will have the final word."

Other deputies hailed parliament's endorsement of the amendments as a "historic day." Lawmaker Mervat Al Kassan called on Egyptians to approve changes that she insisted were "for the benefit of the people,” citing the quota guaranteeing 25% representation of women in parliament as an example. She also applauded plans to set up an upper house of parliament, while failing to mention that one-third of its members would be appointed by the president.

In the climate of intimidation and fear, only a handful of critics still dare to speak out publicly against the amendments. In a fiery speech to parliament, lawmaker Ahmed El Tantawi condemned the changes as unconstitutional and warning that they would drag the country back to medieval times.

"All the articles are a revision, a setback, a return to a system of rule that is worse than what existed before January 25," he said, referring to the 2011 uprising that forced Hosni Mubarak to step down as president.