As Egyptians head to the polls for the final day of voting on constitutional amendments that would grant President Abdel Fattah al-Sisi more power and lengthen his term, opponents have been campaigning against them despite government oppression. 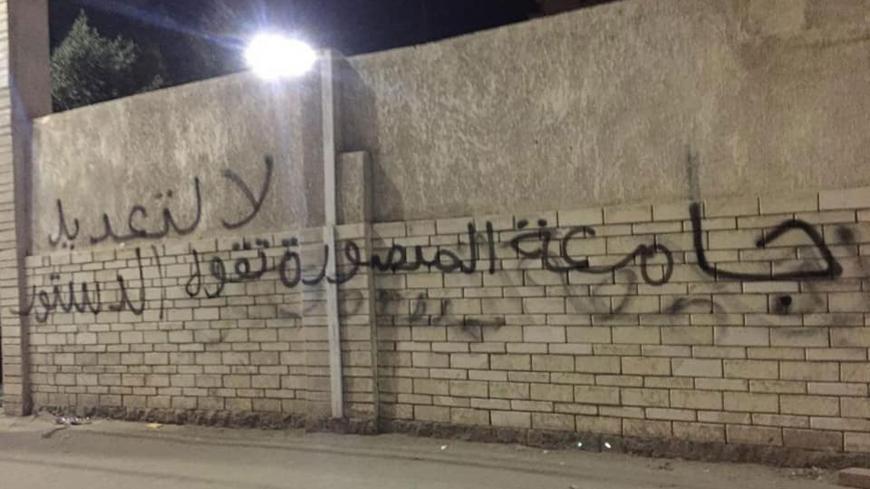 The Freedom for Egypt movement secretly write political graffiti overnight, such as in this example, in Cairo, Egypt, uploaded April 10, 2019. - Facebook/FreedomForEgypt25

CAIRO — Passers-by in Abdel Moneim Riad Square in downtown Cairo were shocked April 11 to see a banner hung from a bridge there that read “Egypt is no one’s property; No to the constitutional amendments; #Freedom_ForEgypt.”

It's unusual for Egyptians to see such banners in light of the repression of those opposing the amendments, which would expand President Abdel Fattah al-Sisi's powers and could extend his term until 2030.

That morning, Freedom for Egypt members had taken on the extraordinary task of swiftly hanging banners and taking pictures of what was hung before fleeing in a cab out of fear of being seen or chased by the police.

The secretive movement surfaced in early March to oppose the April 20-22 referendum on the amendments. Each night the members, mostly in their 20s, secretly scrawl “NO to the constitutional amendments” as graffiti in the streets of Cairo, Alexandria, el-Mansoura, Tanta and other cities. Covering their heads with hats, they distribute leaflets with the same slogan to drivers and passers-by in these cities at dawn.

Speaking to Al-Monitor using a pseudonym, Mohamed Samir said, “We are a group of youths who believe that the solution resides in taking actions on the ground to counter the amendments and raise awareness among the people of their gravity.” He added that the group is independent, not like the regulated and publicized political movements in Egypt.

The group started in Dakahlia, ash-Sharqiya, Alexandria and Cairo before expanding its activities to other governorates such as Qena, Sohag and Kafr el-Sheikh. Samir said it's hard to identify how many followers the movement has, but more than 5,000 have joined since the group launched its Facebook page March 6.

The movement criticizes the constitutional amendments for seeking to keep Sisi in office for 11 more years (he has served since 2014) and for granting him broader powers, especially in the judiciary, such as presiding over the Supreme Judiciary Council and appointing the presidents of the major courts and general prosecutors. In addition, opponents say the amendments would retain policies that have led to poverty and rising prices.

Samir said Freedom for Egypt criticizes the state for cracking down on political parties, repressing oppositionists and preventing power rotation and change. The movement is demanding the release of political prisoners and protesters.

“We have hung 5,000 posters opposing the amendments on the houses’ walls in Cairo and in other governorates in the Nile Delta region since mid-March,” Samir said. “We have also distributed to citizens 15,000 leaflets.” The movement has no links to any political group, he added.

Samir noted how authorities are replacing banners that the movement hangs. He said, “Last week, we placed a large banner in al-Galaa Square in Giza. The police, however, took it down and replaced it with two banners in support [of the amendments] instead.”

The streets and squares of Cairo and other Egyptian cities are brimming with banners supporting the amendments, using slogans such as “Yes to the amendments” and “Toward a better future.” Some oppositionists suspect that the authorities are forcing business owners to hang these posters.

Moreover, the state is mobilizing a large-scale media campaign saying the amendments are important for continuing economic reform.

Ahmed Taha, a taxi driver in Sheikh Zayed, a city in the northern part of Greater Cairo, told Al-Monitor that parliamentarians are giving 1,500 Egyptian pounds (about $87) to drivers in the microbus stations to transport citizens to polling places during the referendum.

Samir explained that the movement can't hold meetings, given its lack of a budget and the security restrictions.

Those opposing the constitutional amendments are subject to a campaign of arrests and intimidation by Egyptian authorities. On Feb. 22, police arrested four members of the Constitution Party, which is spearheading opposition to the amendments in parliament. Mohammad Mohiuddin, a former parliament member, was also arrested that day for the same reason.

Others, including two parliamentarians, have become the targets of lawsuits and defamation campaigns that include leaked sex tapes and recorded phone conversations circulated in February. Some of those targeted have since changed their positions and now support the amendments.

Magdi Abdel-Hamid, spokesman for the Civil Democratic Movement, told Al-Monitor that it's very hard for oppositionists to act on the ground or convey to the public the risks the amendments pose. “We are contenting ourselves with press conferences and statements, because any action on the ground could be very costly, including being subjected to arrests.”

Abdel-Hamid said his movement applied March 24 to the Interior Ministry for a permit to stage a protest in front of parliament against the constitutional amendments, but the application was rejected. He also said the civil movement and opposition were marginalized during community meetings parliament sponsored to discuss the amendments: only a few opposition representatives were invited.

Three members of Freedom for Egypt were about to be arrested as they were hanging banners in Mansoura last week, but they managed to escape police patrol, according to Samir. Members believe authorities could be behind attempts to hack the group's Facebook page and social media calls to boycott the group.