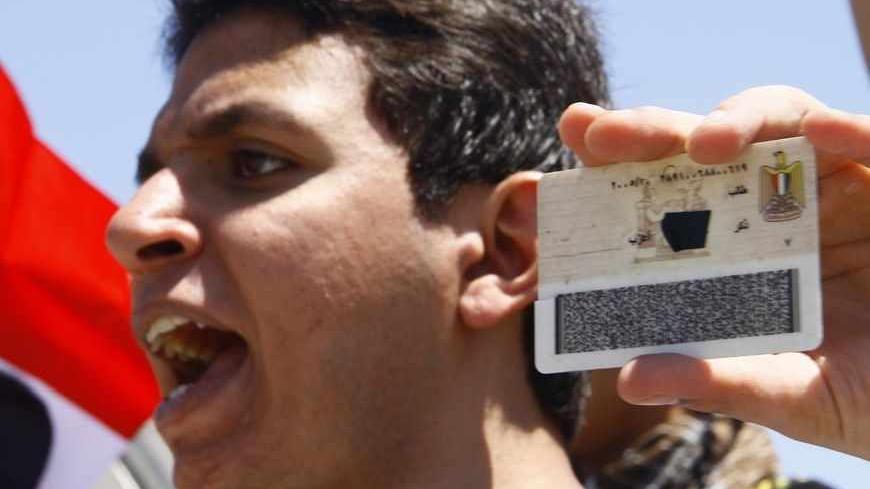 A member of Almaneyoon, holding an ID card with the religion field blacked out, chants against religious discrimination in front of the Alexandria Library, April 27, 2013. - Ahmed Ateyya
Ahmed Ateyya
@@ateyya
April 27, 2013

ALEXANDRIA, Egypt — The small group of demonstrators stood silently in front of the Library of Alexandria by the city's Corniche waterfront promenade, carrying flags, banners, and showing their national identification cards to anyone who wanted a closer look Saturday.

Curious passers-by noticed that the religion fields in the protesters’ ID cards were deliberately obscured with black markers.

National identification cards have been a subject of controversy for at least a decade.

The state requires citizens to identify themselves in their official identity documents as Muslims, Christians, or Jews. Hundreds of rallies, conferences, and lawsuits have called for obliterating the religion field, or at least for allowing other affiliations to be included.

This demonstration aimed much higher.

"Our goals are not to merely amend the law, or provide a safer haven for religious minorities, but to radically change the Egyptian constitution and completely separate religion and state," explained Ahmed Samer, the founder of the grassroots movement Almaneyoun (The Seculars), which organized the protest.

After 10 minutes of silence, they started chanting: "Egypt is for all Egyptians, Muslims, Christians, Shias, Bahais and atheists. No to the Islamic state. No to religious rule. Egypt is a secular state."

The bold slogans forced street dwellers to stop and listen to the young activists. A few greeted and encouraged them, a few looked at them with disdain, and the majority just marveled at the frankness of the youths’ demands.

Alexandria is the heartland of the Salafist movement that established al-Nour party, the second-most powerful Islamic political force in Egypt.

Saturday witnessed the first demonstration for Almaneyoun in the city.

Two weeks ago, six of their members filed a police report, accusing Salafis of assaulting and chasing them to hinder them from drawing political graffiti.

"Those who ask us what's your religion. … We are Egyptians just like you," the chants continued.

The two competing groups continued in defiance of each other for few minutes, before a man approached the secular group, yelling, "Shut up! What the hell are you saying."

Members from both sides almost engaged in a fist fight. Police from the library's security force showed up on the scene, and asked everyone to wrap it up and leave.

At a nearby cafe, secular group members gathered, sipping tea and reflecting on the outcome of the demonstration.

They are university students and young professionals from across Egypt. All had spoken and met with the movement founders in Cairo, but Saturday was the first time many members of different governorates had met each other.

The entire movement is made up of 70 committed activists and a few hundred regular supporters.

"We are not looking for strength in numbers, but rather a strength in principles," Samer said.

Samer is in his mid-20s and works for an insurance company. Before the Jan. 25 [2011] uprising, he used to participate in protests against Mubarak's regime, but he never joined any particular opposition group.

"I believed that Islamists were not less dangerous to Egypt than Mubarak, and I refused to join any group that allowed them to be members," Samer said.

Organizations such as Kefaya and the April 6 Youth Movement led the protests that eventually ended the former president's rule. They were unifying forces for all kinds of anti-Mubarak opposition fractions, without strictly adhering to a certain political agenda.

This strategy continued successfully during the 18 days of uprising in 2011, when organizations such as the Coalition of the Youth of the Revolution included representatives from the far right and the far left.

Mubarak stepped down, the common goal was achieved, and quickly the ideological clashes surfaced. The Muslim Brotherhood and Salafis used their vast network of resources to form parties and compete in every election and referendum against their former secular allies.

"I was truly disappointed how, in the face of the sweeping Islamists popularity, secular forces were too afraid to stand up and take a stance," said Momen Abd Rabbu, a university junior and  founding member of Almaneyoun.

Abd Rabu, who lives in Al-Behera, said that when elections were taking place,  he was surprised to see "so-called liberal parties" holding banners that read "Islam is the solution …  Quran is our constitution," just like their Islamic rivals.

"When I speak [with politicians] in private, they are all agree on the importance of separating religion from politics and they are clearly secular," said Abd Rabbu, "but in public, they would attack us, renounce us, and prefer to say they want a civil state with a religious framework, whatever that means."

What motivated the non-Islamic parties to constantly use Islamic references?

“The word secular has a very bad reputation, and is perceived as synonymous with being anti-religion," said Mahmood Salem, a political activist who ran for the 2011 parliament as a representative of the liberal Free Egyptians Party.

Salem identifies himself as secular, unlike many of his party's followers. In a phone interview, Salem said that the limited time new non-Islamic parties had for campaigning before the elections pushed them toward a non-confrontational approach that leaned toward finding a middle ground to attract the biggest number of possible voters.

“I believe if they were more frank and upfront they might have lost votes on the short term,” said Salem, “but they would harness bigger gains in the future, as they are known in risk of looking inconsistent.”

Disappointed by the futility of the political parties, Samer and Abd Rabbu spent months of fishing for hard-line, uncompromising secular Egpytians.

In December 2012, Almaneyoun was born.

The grassroots movement has since sponsored and participated in many demonstrations against religious discrimination, female genital mutilation, and sexual harassment.

To this point, it has been funded solely by members' donations, and doesn’t own a headquarters.

Members’ ideological affiliations' range from conservative libertarianism to Leninist Marxism, but Samer said this has not been a source of dispute.

"We are not a political group that competes for popularity," said Samer. "Our common goal is to have a country where we can discuss our differences without the fear of being called infidels."

Abd Rabbu pointed out that many members were expelled for not adhering to the movement's strict secularist policy, which he said explains their limited membership.

But Samer looked at the cafe table with dozens of activists engaging in a long discussion and said, "We started with three members, now look at us. … Slowly but steadily, we shall triumph."

Ahmed Ateyya is a Cairo-based award winning journalist and documentary maker. He is the co-founder of Wojood Media, a documentary production company, and the assignment manager of ElWatan news portal.