The draft bill to remove the religion field from national IDs and official documents sparked a debate among Egyptians, with some supporting the decision as it would eliminate discrimination and others arguing that it would further entrench sectarian tension. 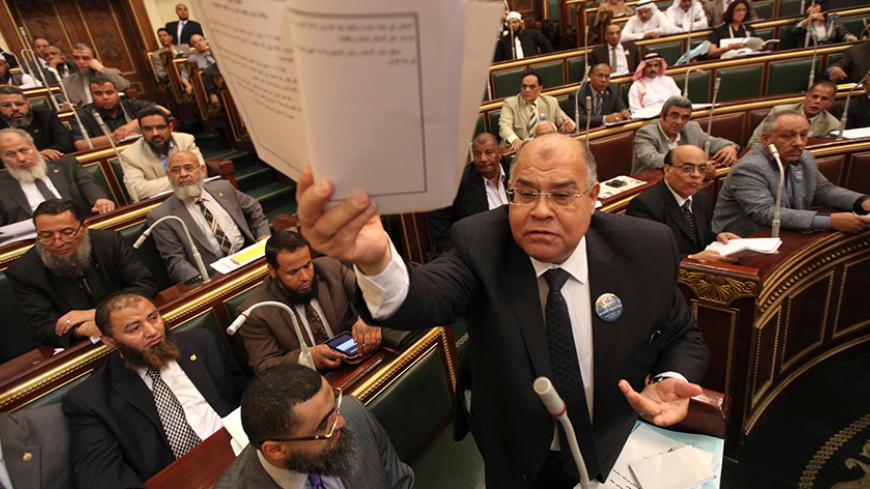 A member of the upper house of the Egyptian Parliament talks during a session in Cairo, June 10, 2013. - REUTERS/Mohamed Abd El Ghany

CAIRO — After collecting the signatures of 60 Egyptian parliamentarians, the official spokesperson for the Support Egypt coalition, member of parliament Alaa Abdel Moneim, submitted June 1 to parliament an 18-article draft bill titled Citizenship. Article 3 of this draft bill states, “The religion field be abolished from identification cards and all official documents. No citizen may be compelled to disclose his/her religion unless doing so were necessary to determine the legal premise of matters such as inheritances and marriages.”

The draft bill provoked a sharp debate: Supporters of the bill viewed it as a basis to convert a heterogeneous society predicated on religious affiliation, such as “Muslim” and “Copt,” into a homogenous one founded on citizenship, and not religion.

For their part, opponents considered the draft bill an affront to Egypt’s Muslim identity, where religion not only affects inheritance and marriage, but is also a basis for the rituals performed by either community; for instance, Muslims who wish to perform Iʿtikāf (act of residing in the mosque in seclusion during the month of Ramadan) have to submit the necessary papers to the Ministry of Religious Endowments to this effect.

The opponents also saw that many legal issues would need to be addressed, such as legal testimonies. A testimony in court of non-Muslims, for example, may not be accepted in Islamic matters and Muslim personal status cases, such as proof of adultery or divorce.

In this context, the head of the parliamentary Human Rights Committee, member of parliament Anwar El-Sadat, told Al-Monitor, “I am not against the law as a whole. But we must feel reassured that it will not lead to domestic problems, the loss of rights or state of confusion in any form, for said changes [removing the religion field] must occur only through consensus within the [Egyptian] community.”

Sadat added, “The elimination of the religion field from official documents primarily aims to prevent discrimination. Discrimination is not based on this [religion] field, but occurs in day-to-day relations. As a result, we, in the parliamentary Human Rights Committee, discussed [another] draft law for equality and non-discrimination, without any consideration to eliminating the religion field [from IDs or official documents], because we know that doing so would result in grave problems that might lead to even more sectarianism.”

On the other hand, the head of Al-Azhar’s Fatwa Committee, Abdul Hamid al-Atrash, highly criticized the bill and told Al-Monitor, “Removing the religion field from official documents is futile. According to Islam, each individual enjoys the freedom to choose whatever religion one desires without compulsion. Therefore, people are free to believe whatever they want. But the national ID, and therefore the religion field, is used to regulate transactions between individuals and allow the proper identification of others, by managing Muslim and Christians rites and allowing entry to Muslim and Christian holy places — mosques for Muslims and churches for Christians. Moreover, the law would lead to confusion in Egypt’s relations with some countries such as Saudi Arabia, where some places are only accessible to Muslims, with Mecca being an example.”

Atrash said that there is no discrimination against a specific community in Egypt that requires the passing of such law, adding, “Laws must serve the interests of society, but this law lacked this characteristic. [For instance,] Christians in Egypt are not excluded from any job as they are present in all state institutions — judiciary, army, police and Foreign Ministry — without any form of discrimination. But this bill inadvertently fuels sectarianism by removing the religion field.”

Ahmed Karimeh, a professor of comparative jurisprudence at Al-Azhar University in Cairo, told Al-Monitor, “In the past [Egypt’s modern history], Copts held leadership posts in Egypt, such as prime ministers Boutros Ghali in 1908 and Youssef Wahbi in 1919, while Wissa Wassef was speaker in 1928, Makram Ebeid was finance minister in 1942 and Youssef Boutros Ghali held the same position in 2004.”

Noteworthy is that there are no texts in the Egyptian Constitution that prevent Copts from holding the position of president.

Karimeh added, “Today, there is nothing in Islam that precludes a Copt from becoming president, which was not the case during the Islamic caliphate, when the caliph — in addition to his political functions — also held a missionary role, led prayers and gave the Friday sermon. The situation in Egypt is different today as [most] modern democratic civil regimes rely on voting for the most competent people, irrespective of whether they were Muslim or not.”

Sadat had used the Islamic movements to create balance with the leftist movements, which were a thorn in his side during his rule. Before him, Gamal Abdel Nasser had clamped down on Islamic forces, namely the Muslim Brotherhood.

In contrast, Father Salib Matta, a member of the Congregational Council of the Coptic Orthodox Church, told Al-Monitor, “Citizenship is predicated on a sense of belonging to the homeland, while religion is a relationship that exists between believers and their God. Therefore, I welcome this law and I think it is urgently necessary to remove the religion field from the IDs to strengthen the sense of citizenship [among Egyptians].”

He added, “Each church knows who the members of its congregation are, and there is no fear for non-Christians to infiltrate church meetings. The seven sacraments such as baptism, chrism, confession, communion and marriage will not be given to non-Copts.”

Matta indicated that the law would fail to achieve true citizenship if forced upon society. In this case, Al-Azhar and the church must play the important role of instilling this sense of citizenship by choosing sermons that solidify this, as well as provide a rhetoric that encourages proper citizenship through the media and the ministries of culture and education.

In the same context, lawyer of the Coptic Church Ramses Najjar, told Al-Monitor, “This law will make all citizens equal as dictated by the 2014 Egyptian Constitution. Its aim shall be to confront Salafi extremist ideologies and allow people to embrace their Egyptian nationality without any fanaticism for the religion of their birth.”

Najjar added, “The law will allow any Egyptian Copt to assume sovereign ministries such as those of defense, foreign affairs and interior. Modern Egypt can only be built on competencies and not fasting and prayer.”

The assistant secretary-general of the Salafi Nour Party, Shaaban Abdel Alim, countered by saying, “Sponsors of the current draft law are politically bankrupt. Instead of concentrating their efforts on urgent matters needed to advance the country — such as the economy, security and education — parliamentarians are proposing these laws to distract people from core affairs.”

Shaaban told Al-Monitor, “Special committees from our party [Nour Party] shall study this matter [draft bill] and put it to a vote [within the party] pursuant to a key principle stipulated in Article 2 of the Egyptian Constitution of 2014, which states that 'Islam is the religion of the state and Arabic is its official language. The principles of Islamic Sharia are the principal source of legislation.' As such we shall reject the bill if the committees find it inconsistent with constitutional provisions.”

The cancellation of the religious field from IDs and official documents may not help to eliminate discrimination in Egypt, as discrimination is not present at the government level. Rather, discrimination is fueled by sectarian tension, an issue that needs to be addressed by spreading awareness about the importance of the citizenship concept through education and media.