The forced displacement of five Christian families from the Beni Suef governorate in Egypt brought back the debate of the struggle between Muslims and Copts in Egypt. 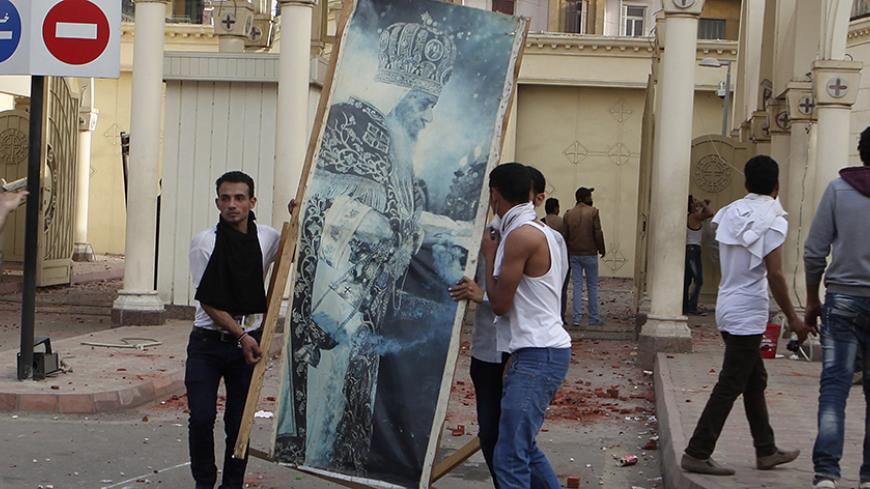 Coptic Christians remove a picture of Pope Shenouda III from the gate of the main cathedral in Cairo, during sectarian clashes with Muslims outside the cathedral, April 7, 2013. - REUTERS/Asmaa Waguih

CAIRO — Five Coptic Christian families consisting of 18 members from the village of Kafr Darwish in al-Fashn, Beni Suef governorate, were forcibly displaced on May 22 after Ayman Youssef Tawfik, a young member of one the displaced families, published in May caricatures of the Prophet Muhammad on his Facebook page. A displacement sentence was issued on May 25 during a customary court hearing in Kafr Dahshur.

However, this customary court does not represent the state, as it involves customary arbitrators who derive their legitimacy from tribe members or from being located in a specific residential area. The arbitrators’ sentences are based on customs that are associated with their own culture and their geographic location. Regular courts base their sentences on physical evidence and their judges are graduates of law schools.

The arbitrators listen to both parties, while each side lists the offenses of the other side. The arbitral tribunal subsequently compares the testimonies of each party, evaluates the offenses committed and issues a sentence.

Security leaders and parliamentarians, as well as conservative leaders such as Maj. Gen. Mohammed Abu Taleb, the security director of the Beni Suef governorate, attend these customary courts, especially in murder cases.

Tribes and village residents resort to customary courts because such courts solve disputes fast and base their decisions on village customs and traditions.

On June 2, the displaced families returned to their village after Beni Suef Gov. Mohamed Selim worked with security services on bringing them back to their homes during reconciliation meetings between the village residents.

Following negotiations under security auspices between the Coptic Orthodox Church and members of the Muslim families in Kafr Darwish, an agreement was reached to apply the law on contempt of religion on Tawfik upon his return to Egypt (he is currently in Jordan) and to allow the return of the Coptic Christian families to their homes. According to this law, if one is found guilty of defamation of religion, this crime is punishable by between six months to five years in prison and a fine of between 500 Egyptian pounds ($65) to 1,000 Egyptian pounds ($131). Article 63 of the Egyptian Constitution prohibits forced and arbitrary displacement.

Legal adviser Mamdouh Ramzi, former Coptic member of parliament in the Shura Council, told Al-Monitor that President Abdel Fattah al-Sisi is the first elected president who paves the way for a state of citizenship, equality and participation, where citizens are treated as Egyptians regardless of their religion. This has been quite evident for Egypt's Copts on two occasions.

The first was Sisi’s visit to the headquarters of St. Mark's Coptic Orthodox Cathedral in the Abbasiya district on Jan. 6 for Orthodox Christmas. During his visit, Sisi delivered a speech to greet the Copts and, according to Ramzi, sent a message to the world whereby the era of separation between Muslims and Copts has come to an end.

The second occasion was when the Islamic State (IS) slaughtered 21 Egyptian Copts in Libyan territory on Feb. 15. This prompted Sisi to immediately deal a blow to IS bases in Libya on Feb. 16, in a bid to send a message that Egyptian blood is not to be shed, be it Muslim or Coptic.

Following the 1952 revolution in Egypt, a discrimination campaign was launched against the Copts, as they were associated with the Wafd Party, which was affiliated with the British.

Ramzi said, “Unfortunately there are cultures that have been established since 1952 and continue to exist. These cultures are based on the lack of coexistence and acceptance of others. Aspects of such cultures emerge when Copts build a new church — the world is turned upside down. This is not how we act. We do not confront our compatriots when they build mosques, although we are the indigenous people of Egypt.”

He added, “This culture of hatred against non-Muslims needs time in order to be eliminated. In other words, we are back to square one, and the phenomenon of forced displacement of the Copts has emerged again. To find a radical solution to this problem, citizens should be dealt with as Egyptians regardless of their religion. This can be achieved through school curricula and media outlets. Preferably sheikhs and priests tackle this issue in their speeches and sermons, as this would ultimately lead to a popular consensus.”

Ramzi pointed out that a solution would not be found without the political will of the state, which can impose its will and hegemony. It is unreasonable to talk about rule of law when solutions to state problems are left for customary courts, which deprive the state of its stature. The fact that the Beni Suef governor and security director met with the Muslim families who committed the offense of forcing the Coptic families to leave is a crime in itself; it entrenches the fact that Muslims are the most powerful and that whatever they do and no matter what violations they commit, they will find people to sit down with to solve their problems away from the law.

For his part, Coptic intellectual Kamal Zakher told Al-Monitor that the forced displacement incident is the result of the state behaving in an inappropriate way, and that it poked its head to the surface back in 1972, when Anwar Sadat opened the door for Islamic groups to become politically involved, a move that Copts saw as inciting violence against them.

Zakher pointed out that the Copts’ displacement is part of the conflict between political Islam and the current regime as the support of a majority of Copts support the government, making them a target for those looking to challenge the state.

“Forced displacement is a crime and is not subject to prescription. The ball is now in the court of the state, which can either apply the law and raise the value of both the state and citizenship, or it can leave Egypt to be deemed a religious state where officials sit down with the stronger party and carry out its will,” Zakher said.

Legal adviser Ramses Najjar, lawyer of the Coptic Orthodox Church, told Al-Monitor that what the Beni Suef governor and security director did was the right thing. They successfully contained the situation without provoking the feelings of Muslims. They stressed that Tawfik faces contempt of religion charges upon his return to Egypt. They also enabled the return of the displaced families within a week.

Najjar pointed out that any other decision would have led to an escalation of the situation between the two parties at a time that is already challenging for the Egyptian state.