The houses of worship law is likely to pass in the Egyptian parliament, but the problem lies in whether the government can enforce it amid the apprehensions of radical Salafists. 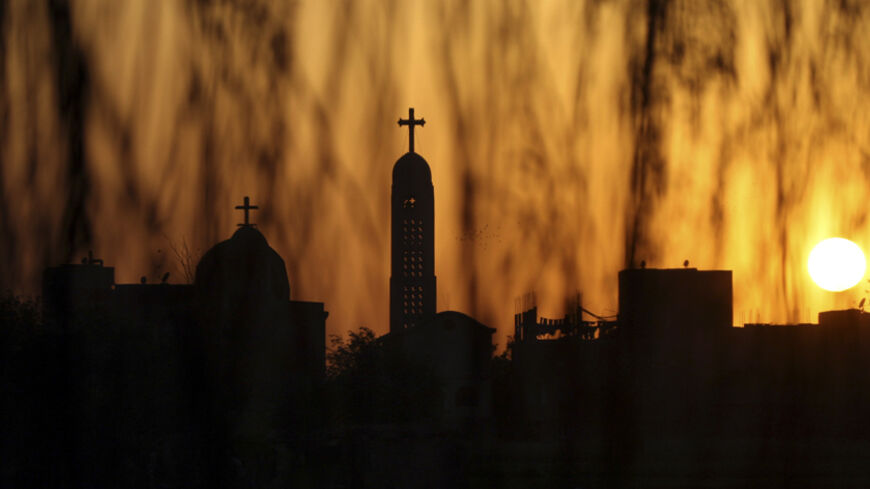 The Coptic Orthodox Virgin Mary church is seen during sunset in Cairo, April 18, 2009.

The unified houses of worship law, which regulates the construction of mosques and churches in Egypt, is still waiting for the parliament’s approval.

Although the voting sessions in parliament haven’t begun yet, the controversy about the houses of worship law started when Christian lawyer Nabil Luka Bibawi filed a lawsuit with the Administrative Court of the Egyptian State Council to compel the prime minister and the justice minister to form a committee comprising scholars from Al-Azhar and the Egyptian church to write the law’s outline.

The lawsuit was referred to the State Commissioners Authority on Sept. 1, to prepare a report about it and to hear the legal opinion of the commission, which did not decide on the lawsuit yet. Al-Monitor tried to find out the proposals of all parties about the law and identify the obstacles facing the building of Muslim and Christian houses of worship in Egypt.

Safwat al-Bayadi, the head of the Evangelical Church in Egypt, told Al-Monitor that the obstacles restricting the building of churches date back to 1934, when then-Deputy Interior Minister Al-Ezabi Pasha put down 10 conditions on the building of churches. The conditions included: not building churches near schools, canals in villages, railways, government offices, government facilities or between residential areas.

“Most of the churches were established through facilities provided by various governments, but the conditions of Pasha hindered the building of churches in many cases," he said. "Entire cities and villages in the countryside and in Upper Egypt don’t have a single church.”

Nader Shukri, the media spokesman of the Maspero Youth Union (a movement comprising young Copts), told Al-Monitor that many villages in Lower Egypt and Upper Egypt suffer from a lack of churches, and that the inhabitants are forced to travel dozens of kilometers from their homes to other villages to pray during the holidays.

“Some members of the Salafist movement tried to prevent Copts from performing their prayers [outside] their villages. In 2012, many inhabitants of villages that have no churches went to pray for the Assumption of Mary holiday in churches in the villages of Basra in Amreya and Alayqat in Luxor,” he said, adding, “The incident was repeated when hundreds [of worshipers] went from Al-Fashn center in Beni Suef governorate to the village of Marco, a village belonging to the same center and that has a church. Radical Salafists prevented them and clashes erupted between them, resulting in many injuries.”

In the same context, Shukri said, “The idea of Copts traveling from one village to another to pray is impractical because it is impossible that hundreds of families have to travel to pray. Some villages to which they go to pray are also considered strongholds of militant Islamic currents that pose a threat to Copts, in addition to the transportation problem between villages, especially in Upper Egypt and the countryside.”

Bayadi said that the three Egyptian churches (Orthodox, Catholic and Evangelical) held a meeting to discuss solutions to the obstacles of building churches. It resulted in the three churches asserting that the law should not constrain the building of Muslim or Christian houses of worship, pointing out that the Egyptian Constitution in 2014 has acknowledged in Article 64 the absolute freedom of belief and religious practice.

Shukri said that the solution "lies in submitting the building of houses of worship in Egypt to the laws of the Ministry of Housing, whereby construction can take place as soon as the [government is notified] as long as the new structure and the land allocated are up to standard. This would be done without the approval of the security services [Interior Ministry], which has been “imposing complicated conditions on building churches since 1934."

Shukri said that security monitoring to building churches is unjustified “because most of the Christian clergy don’t involve religion in politics. The fear that extremist pastors would control the churches — as happened to some mosques in the Muslim Brotherhood era — is highly unlikely,” despite the fact that some pastors have commented on political issues, such as the law on demonstrations.

According to Bayadi, there is a general trend in the government, from President Abdel Fattah al-Sisi and the current Cabinet, to liberate the building of churches from the previous constraints. He added that the government has already started granting Egyptian churches some land in new cities to build houses of worship.

He said that the state would not ignore the demands of the three Egyptian churches regarding the houses of worship law. Shukri agreed, adding that what is more important in the new law is for there to be a commitment to apply it after it passes.

The government, the churches and Al-Azhar seem to agree on providing more freedom in building houses of worship in the anticipated law. The challenge does not lie in passing the law, but in the state’s ability to protect it and protect the Copts, as some currents are apprehensive about building new churches. Hisham Kamal, the spokesman for the Salafist Front (a well-known Egyptian Salafist organization), told Al-Monitor that the law is “an attempt to enable the Copts to spread the Christian religion in some villages, which they want to secede from Egypt and form an independent state for them.”

In this context, Bayadi said, “Talking about empowering the Copts is unacceptable because the law will be unified for all religions and will not allow Christians to build churches in villages where the Muslims will be deprived of building mosques. No religious or political faction would be able to restrict the freedom of building houses of worship, and we are optimistic about the new law and about the protection of churches by the state, Al-Azhar and the moderate Muslims. Many of those who participated in restoring the churches that were destroyed by the terrorist events after the breakup of the Rabia sit-in were Muslims.”