With the alleged kidnappings of priests’ wives and forced conversions to Islam, Christian and Muslim leaders are renewing efforts to restore official counseling sessions for those wishing to change their religion. 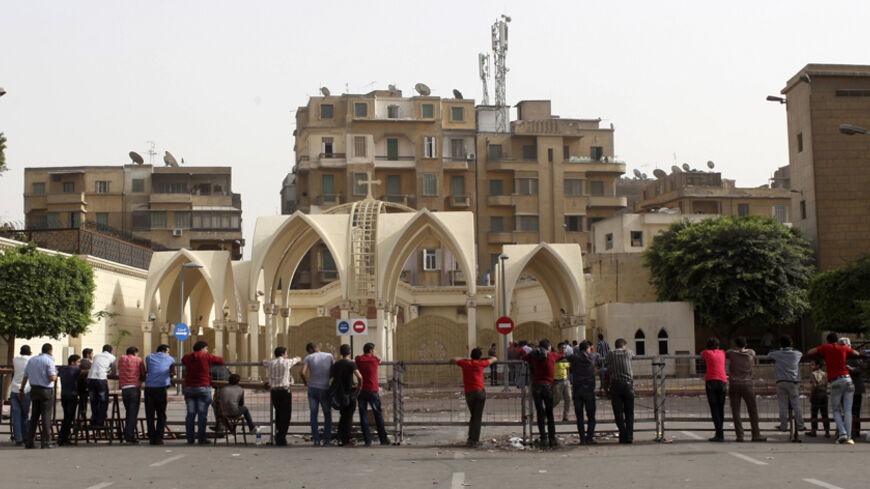 Newspapers and news sites reported on clashes Sept. 15 between security forces and Coptic demonstrators in the town of Jabal al-Tair in Minya governorate. Afterward, demonstrators tried to attack a police station in protest of what they called “the failure of security forces to bring back a kidnapped Coptic lady.” This woman was Iman Morcous Saroufim.

Saroufim, a housewife from the village of Jabal al-Tair, is the immediate relative of a priest, according to some news sites. She had allegedly converted to Islam, reports said, citing a security source close to the Minister of Interior. Christians of Jabal al-Tair protested, while a Coptic lawyer filed a complaint with the attorney general accusing the interior minister of spreading false information about the kidnapped woman.

The crisis has calmed with the return of Saroufim on Sept. 28. In an interview with El Fagr, she said that on Sept. 3, she was kidnapped from a town close to Jabal al-Tair and moved to Suez governorate, where she was forced to wear the veil. Then, read the report, the abductor took her picture and gave it to a woman wearing the niqab, who went to al-Azhar and pretended to be Iman, wanting to convert to Islam.

Paul Halim, a priest of the Orthodox Church in Egypt, told Al-Monitor that the reasons behind the large numbers of Christians converting to Islam are primarily social, and have nothing to do with being convinced of the essence of the Islamic religion. “For instance, divorce is not allowed by the church. This has pushed a lot of husbands and wives to convert to Islam to get divorced,” he said.

Undersecretary of Al-Azhar Abbas Shoman also told Al-Monitor, “The reasons are social. It could also be that a man or a woman wishes to marry someone from another religion, which motivates them to embrace another religion in many cases.”

Safwat el-Bayadi, head of the Evangelical Church in Egypt, told Al-Monitor that he discussed the issue in a phone call with Ahmed el-Tayeb, the grand sheikh of Al-Azhar University. Tayeb emphasized that every Muslim or Christian citizen should resolve his social problems without having to change religion. Bayadi said, “The evidence for the reasons being social is that the thousands of Christians who converted to Islam have filed lawsuits demanding the church allow them to convert back to Christianity again after the reasons that pushed them to convert to Islam, such as divorce, were over.”

According to Bayadi, among the reasons causing the religious crisis to escalate are the cases of priests’ wives, such as Wafaa Constantine and Camelia Shehata, converting to Islam, because such scandals affect the reputation of the church. He added, "Some people criticize priests and pastors who call them to hang onto their religion, while they are unable to convince their own wives to do so."

It was reported that Wafaa Constantine and Camelia Shehata have converted to Islam, which raised the ire of a group of Copts. They protested inside the Egyptian Cathedral in Abbasia, demanding that Constantine and Shehata be handed over over to the church, arguing that they were kidnapped. Following Shehata’s return by security forces to the church, a militant jihadist group bombed a church in Iraq.

Columnist Farida Shoubashi told Al-Monitor, "The culture of a society that does not respect the individual's right to freedom of belief is the main cause of the crisis." She said, "When I defamed Islam, I got many death threats, especially since I am from Upper Egypt, where many see changing religion as a disgrace."

Halim, the priest, said the decisions of the Interior Ministry under the era of former President Hosni Mubarak complicated these crises by canceling counseling sessions without justification. "This has allowed some to claim that any person who changes his religion was kidnapped and forced to do so," Halim said.

These counseling sessions consist of meetings between those who wish to change religion and a representative of the person’s current religion, be it Islam or Christianity. During these meetings, the representative tries to persuade the person not to convert and discusses the reasons leading to the change. "In previous eras, the state discriminated between Muslims and Copts, so the conversion of any Christian to Islam was a very sensitive matter," Halim said. "But now, the situation is different and it is possible to find solutions."

Halim said, "The media only highlights the cases of priests and pastors' wives converting to Islam, which are highly sensitive issues for the Copts and the church, despite the fact that there are dozens changing their religion, whether Muslims or Christians. But the Egyptian media doesn't care to talk about these cases, and doesn’t discuss the reasons why Copts are dealing sensitively with this issue, as their long-standing feeling of persecution still exists."

Shoubashi said that Islamist newspapers and TV channels “claimed that I converted to Islam to marry Ali Shoubashi without being convinced of their religion. Yet I converted to Islam after I got married, and after years of total conviction. Political Islam movements circulated these allegations to tarnish my reputation since I am one of their oppositionists.”

Bayadi said, “Holding the counseling sessions that were canceled under the era of [former Interior Minister] Habib al-Adly without known reasons is a solution to the crises that might occur between Muslims and Christians.”

For his part, Shoman said, “The counseling sessions will stop any rumors about the kidnapping and coercion of any person to convert to Islam or Christianity, because it means that this matter has taken place under the supervision of the church or Al-Azhar.”

Bayadi said that the counseling sessions are not worrisome, because they are held as measures to protect the person who wants to change his religion. “The person who wants to change his religion may be exposed to many threats that include being killed," Bayadi said. "Yet, when things are done under the supervision of the church or al-Azhar, it means that the person is totally protected and no one can hurt him, because any prejudice against the person is considered prejudice against the church or Al-Azhar’s reputation.” He said that there were consultations between the leaders of the Egyptian churches and the sheikh of Al-Azhar to demand that the state hold counseling sessions again.

Shoubashi said, "The solution lies in bringing up the new generations in schools, universities and houses of worship to uphold the value of freedom of belief over any social legacy considering the change of religion a disgrace."