Al-Azhar has launched a unit to research the causes behind Egypt's exploding divorce rate and to counsel people considering divorce to reconsider. 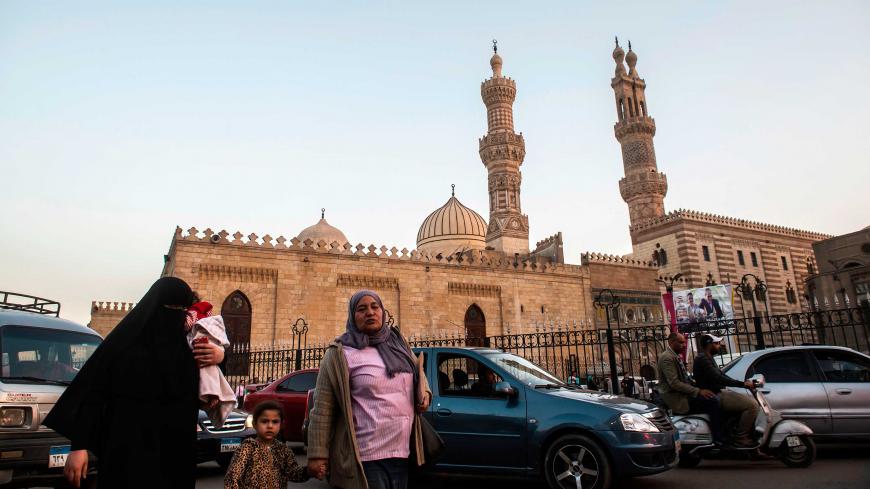 CAIRO — A family reunification unit established by Al-Azhar's Fatwa Global Center to prevent divorce receives about 400 questions a week, most of them from women. The unit is still in its first month, so it is too early to tell whether it truly has a chance to foster familial harmony where it is lacking or whether it will merely serve to encourage women to remain married regardless of their situation.

The aim of the 28-member reunification unit, inaugurated April 19, is to “protect the Egyptian family from breaking up,” said Sheikh Osama al-Hadidy, the center's general coordinator. It is not to assist with divorce. Hadidy told Al-Monitor that the unit conducts research on the causes driving Egypt's rising divorce rate and develops strategies to overcome whatever is standing in the way of domestic bliss. It also offers telephone, email and face-to-face counseling to mediate between couples contemplating divorce.

There are three female preachers on the six-member team of counselors that deals with the public, the theory being that they are better-suited to understand women’s points of view and therefore more likely to have productive dialogues with them. As noted, most callers to the unit are women.

Hossam el-Gamal, head of the Information and Decision Support Center, a public think-tank that conducts research and develops strategies for the Cabinet, told Al-Monitor that the divorce rate has risen from 7% in 1965 to 40%, giving Egypt the dubious honor of having the fastest-growing divorce rate in the world, with 240 a day. It is third in the Middle East in percentage terms.

Last year, the high rate of divorce caught the eye of President Abdel Fattah al-Sisi and put him and the leadership of Al-Azhar at odds on how to approach the issue. Sisi said that the rate had “alarmed” him. By law, Egyptian men can divorce their wives verbally — it must be registered at some point later — while women must pursue and obtain a divorce through the court system. Sisi suggested changing the law to prevent men from divorcing their wives verbally, without having to approach a court or a marriage official. Al-Azhar's leadership rejected such a move out of hand, considering it contrary to Sharia. Thus far, there has been no official movement on changing the law, but Sisi's concerns were one factor in Al-Azhar mobilizing to try to combat the high level of divorce.

According to Hadidy, in the reunification unit’s first weeks, most cases have involved women contemplating divorce because of their husband's adultery. He believes this is an area where a female preacher might get a better handle on the situation than a male counselor because she is more likely able to relate to the women’s feelings and thoughts. “Besides, [a female preacher] is more capable of convincing women to forgive their husbands for that mistake, after being sure that they are totally repentant, and to make peace with him for the sake of the family,” Hadidy said.

Men, on the other hand, frequently seek divorce on the grounds that women are “spilling family secrets” to outsiders, according to Hadidy. One of the common reasons for divorce is sexual problems, and in these cases both genders prefer to consult a preacher of their own sex.

Divorce for women in Egypt is problematic and unpleasant because of the long, drawn-out court process in addition to having to pay for legal expenses. Many women also complain of being forced into unfair divorce settlements that fail to meet their as well as their children's living expenses.

The reunification unit's goal of persuading Egyptians to stay in the family and work out their problems has received mixed reviews. Margaret Azar, deputy chairman of the Human Rights Committee in the Egyptian parliament, told Al-Monitor, “Al-Azhar’s initiative reflects the focus on divorce and attempts to battle against its negative impact on society. However, it is not enough to protect society from divorce. We should make laws that protect wives in cases of adultery and domestic rape and women in general from child marriage. We should also ensure women’s alimony after divorce. Many Egyptian husbands are repressive because they know the laws do not protect women’s rights. Reducing divorce rates is therefore just an analgesic, and greater problems might be lurking.”

Al-Azhar’s focus on women — in ensuring their presence in the reunification unit to take other women’s perspectives into account in finding solutions to marital problems — is a sign of the religious institution breaking new ground, to a certain extent. Al-Azhar Vice President Youssef Amer told Al-Monitor, “Al-Azhar was never absent when it came to women’s affairs.” He added that Al-Azhar's resorting to women to solve problems was based on supporting the general strategy that the state adopted to empower them when it designated 2017 the Year of Egyptian Women. He noted that the government's strategy had showcased women’s success in various fields and positions, mainly in the religious arena.

“For instance, Al-Azhar's group of female preachers engaged with women in remote provinces in raising awareness about the importance of women’s social and political roles and how to overcome challenges like harassment, inheritance, work and divorce, among others,” he said.

Amani Aziz Riyad, a Coptic member of parliament, views Al-Azhar’s interest in women’s affairs, as well as its attitude toward Christians, as encouraging. “The current spiritual leadership of Al-Azhar, whose grand mufti is Sheikh Ahmed al-Tayeb, does not discriminate against women or Copts,” she told Al-Monitor. “Tayeb praised my presence on the Religious Affairs Committee in parliament in January 2017 although I am a Christian woman. This shows Tayeb’s understanding of women and Copts’ role and standing.”