Calls for new legislation in Egypt to annul verbal divorce, namely by President Abel Fattah al-Sisi, raise the ire of Al-Azhar and other religious institutions already at odds with the president. 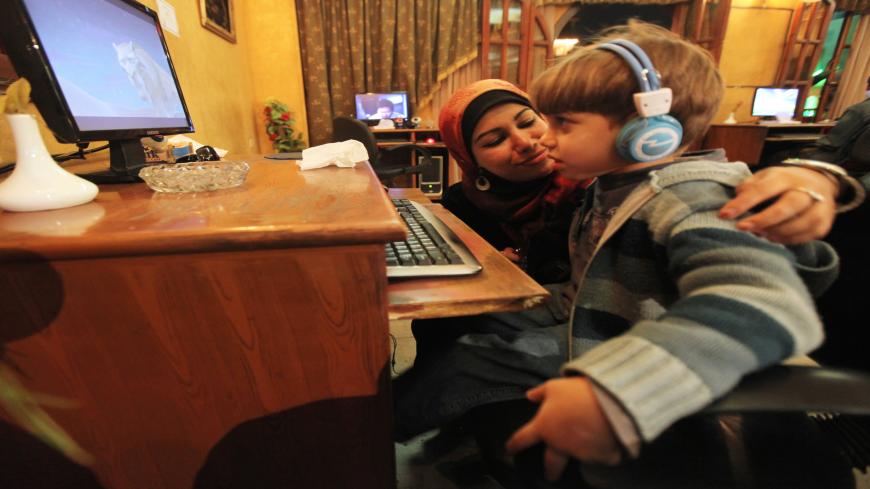 Egyptian radio presenter and divorcee Mahassen Saber takes a break from working on her internet-based radio station "Divorcees Radio" to check on her son as he watches a film at an internet cafe in Zagazig, north of Cairo, Egypt, Jan. 14, 2010. - VICTORIA HAZOU/AFP via Getty Images

CAIRO — The Administrative Court of the Egyptian State Council ruled Sept. 1 that it does not have jurisdiction to look into the case demanding the minister of justice to amend the personal status law in such a way to annul verbal divorce and have it authenticated officially by virtue of written documents.

The legal case, filed by lawyer Haitham Saad, was also directed against the Grand Imam of al-Azhar, Ahmed el-Tayeb, to renounce verbal divorce, as many Egyptians, under daily pressure and stress, express orally their intention of divorce without any real will to do so.

The calls to annul verbal divorce have raised the ire of religious institutions in Egypt.

Back in 2017, during a Jan. 24 ceremony marking National Police Day, Egyptian President Abdel Fattah al-Sisi had called for new legislation to annul verbal divorce. The ceremony was attended by Tayeb and several clerics and statesmen.

Tayeb and Al-Azhar’s Council of Senior Scholars categorically rejected Sisi’s call for the need for divorce authentication, on the basis that divorce verbally pronounced is the rule in Sharia.

At the time, Sisi said that according to the Central Agency for Public Mobilization and Statistics, 40% of marriage unions end up in divorce within five years, which threatens the stability of Egyptian families and children. He added that the new legislation would give couples a chance to reconsider a decision they might have made out of anger.

In response to Sisi’s proposal, Al-Azhar’s Council of Senior Scholars issued a statement on Feb. 5, 2017, stressing that divorce had occurred when pronounced verbally since “the time of the Prophet [Muhammad],” without the need of any witnesses or the need to authenticate the divorce.

On Feb. 17, 2017, Tayeb said on his TV program “The Hadith of Sheikh Al-Azhar” broadcast on Al-Masriya satellite channel that any bid against Al-Azhar to annul the verbal divorce “is crossing the line and undermining what is right.”

“Everyone ought to talk about their own prerogatives. Al-Azhar ought to be left to deal with the matters of its specialization,” he added.

On May 20, 2017, amid a state of extreme secrecy in parliament, members of the parliamentary Religious Affairs Committee had finished preparing a bill requesting the husband to authenticate the divorce within a certain period, or else face a penalty or imprisonment. This was a clear defiance to the official religious institutions' stance.

The bill and its amendments have yet to be approved in light of the ongoing dispute with religious authorities.

A judicial source, who refused to be named, told Al-Monitor via phone, “The new rule of the Administrative Court stating that it does have any prerogative to look into the divorce issue suggests that the court did not take sides in the debate. But I believe that on the ground the court’s decision is biased toward the religious institutions against Sisi’s proposal to authenticate the verbal divorce, as it did not bind the minister of justice to do so.”

The source explained that the proposed amendments to the personal status law provide for the need to authenticate the divorce within a maximum period of 24 hours from its occurrence, or else the husband would face penalties up to imprisonment and a financial fine, which will be determined by parliament’s Religious Affairs Committee and the Legislative and Constitutional Committee before the law is issued.

The source noted that the Religious Affairs Committee has been working in the past period to draft the legislation in response to Sisi’s proposal, despite its contradiction with the Islamic law and being opposed by religious institutions, namely Al-Azhar and Al-Azhar’s Council of Senior Scholars.

According to the source, this suggests a conflict between legal and religious texts, and a clash in visions between the presidency and Al-Azhar.

Mahmoud Mhanna, a member of the Council of Senior Scholars, believes that the authentication of divorce does not necessarily mean a clash between the law and religion. “A middle ground formula can be reached in a bid to preserve family unity and stability in light of the alarming increase in the number of divorce cases, without undermining Sharia rules,” Mhanna told Al-Monitor in a phone interview.

“Al-Azhar is exclusively concerned with all affairs of Islam and religion, and is the main reference in religious sciences and Islamic affairs,” he said.

Article 2 of the Egyptian Constitution stipulates that “the principles of Islamic Sharia are the principle source of legislation.” This means that parliament has to take into consideration the opinion of Al-Azhar and the Council of Senior Scholars before carrying out any legislation pertinent to religious issues or topics entailing Sharia provisions.

Mhanna stressed that parliament has the right to issue a law to authenticate verbal divorce, but after considering the stance of Al-Azhar to agree on a formula that is satisfactory to all parties. He noted that a formula has been reached between the two parties, whereby a divorce occurs when orally pronounced, with the new bill requesting the husband to document the divorce within 24 hours, otherwise he faces penalties.

“I believe this is the middle ground between the legal and the religious text,” Mhanna concluded.