The Grand Mufti of Egypt issued a fatwa permitting Muslims to work in church construction, which sparked controversy on social media with activists recalling previous fatwas on Salafist websites prohibiting such works. 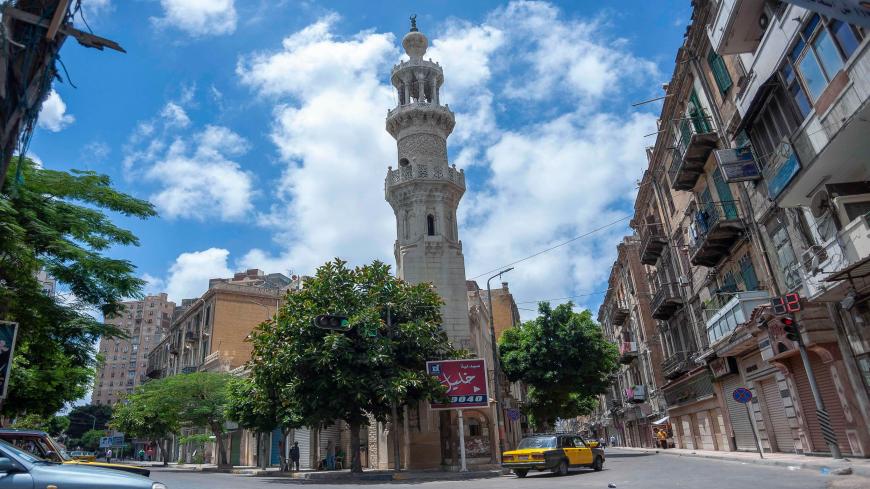 The Attarine Mosque, originally an octagonal church dating back to 370, transformed into a mosque during the Islamic invasion in the seventh century, Alexandria, Egypt, July 12, 2020. - -/AFP via Getty Images

CAIRO — It seems the Egyptian authorities have been promoting the participation of both Muslims and Copts in the building of houses of worship as a standard to achieve peaceful coexistence in the country since the ouster of the Muslim Brotherhood regime on July 3, 2013. In this context, politicians and media outlets hailed the Coptic Orthodox Archdiocese of Qena’s Feb. 7 decision to donate funds for the completion of Al-Numani Mosque’s construction works.

That is what happened on Feb. 3, when parliament Undersecretary Mohamed Abul Enein called, in a speech before the minister of religious endowments in parliament, for raising awareness among Egyptians to accept Muslims taking part in the construction of churches, and Christians of mosques.

Abul Enein’s statement came days after Grand Mufti of Egypt Shawki Allam issued a fatwa Jan. 24, allowing Muslims to work and take part in the construction of a church in return for a salary.

Most of the activists welcomed Allam’s fatwa, however, it sparked angry reactions on social media. Mohammad Fouad left a comment on Facebook, saying, “It is an anomalous fatwa ruling … the Almighty Allah said, ‘Help ye not one another in sin and rancour.’ Christianity is blasphemous, and blasphemy is the greatest of all sins for Allah. How could I help them in that by building a church, be it for a fee or for free?!”

Menna Mahmoud wrote, “It is better for him [Muslim] to serve his mosque. … Oh Allah, lead us not into the humiliation of serving the churches, but give us the honor of serving only your mosques.”

Former parliament member Amr Hamroush told Al-Monitor that social media activists are not religious scholars, and some of them are basing their negative take on Allam’s fatwa on previous extremist fatwas issued by some Salafist currents, organizations and websites.

Hamroush said that the draft law on fatwa regulations, which bans the issuance of fatwa rulings by any irrelevant parties such as Salafist groups and their websites, was supposed to put an end to such extremist fatwas. However, he indicated that the coronavirus crisis had preoccupied the former parliament with urgent laws and decisions designed to manage the crisis, thus delaying the final approval of the draft law on fatwa regulations. He expressed hope that the current parliament prioritizes this draft law.

Members of parliament, including Hamroush, had submitted a request to pass a law regulating fatwas and limiting them to those who have jurisdiction, i.e., Al-Azhar and Dar al-Ifta, in May 2017. The former parliamentary Committee on Religious Affairs drafted a preliminary bill in October 2017. Yet it was delayed due to the amendments suggested by the Ministry of Religious Endowments, Al-Azhar and Dar al-Ifta.

Following the three parties’ consent, the coronavirus crisis delayed the discussions in parliament of the draft law in the last legislative session in 2020.

The source indicated that in case he, as a sheikh, or any other sheikh at the organization were asked a question, the answer must be based on fatwas issued by Salafist scholars who unanimously prohibited Muslims from taking part in building churches. He stated as examples the fatwas by Ibn Taymiyya and Ibn Qayyim al-Jawziyya.

Ahmad Shahin, a researcher of Islamic jurisprudence at Al-Azhar University, told Al-Monitor that it is a false claim to say that the Salafist scholars unanimously banned the Muslims’ work in churches. He explained that Imam Malik ibn Anas did not issue a fatwa in this regard, while Imam Abu Hanifa permitted that, even though some of his followers disagreed with him. Work in churches was also permitted by some Hanbalis (followers of Ahmad ibn Hanbal), such as Ibn Hajar al-Asqalani, in his explanation of Sahih al-Bukhari (The Authentic Collection), and some of Shafi’i’s followers, such as Badr al-Din al-Zarkashi, he added.

Dar al-Ifta based its fatwa allowing Muslims to work in churches on a fatwa by Imam Abu Hanifa, in which he stated that work in itself is permissible and is an obligation, unless it involves a humiliation of the Muslim or it requires him to consent to what contradicts the Islamic theology.

Shahin said it is false to assume that building churches is a sin that Muslims should not be engaged in and this assumption “is contrary to true religion,” he said. He added, “If the presence of churches was a sin, neither the Prophet Muhammad nor Umar [the second Muslim caliph who ruled after the Prophet Muhammad' death] would have pledged to protect the churches in the Ashtiname of Muhammad and Umar's Assurance. It is impossible for the prophet and Umar to protect a sin.”

Late Mohamed Sayed Tantawy, former Al-Azhar Grand Imam, gave a fatwa in 2009 that Muslims are allowed to participate in building churches, and this fatwa caused controversies at this time.

A preacher in the Ministry of Religious Endowments, who wishes to remain anonymous, agrees with Shahin. He told Al-Monitor that the Wahhabi movements, “or those calling themselves Salafist movements,” encourage their followers to lash out online at Dar al-Ifta, the Ministry of Endowments and sometimes Al-Azhar. The renewal of the religious discourse to promote citizenship, national unity and peaceful coexistence of people of different religions can only be brought about through concerted efforts deployed by these three parties, he said.

In December 2020, Al-Azhar Grand Imam Sheikh Ahmed el-Tayeb also came under a fierce campaign for criticizing old fatwas judging impermissible to greet Christians on Christmas and labeling them as “the people of the covenant,” i.e., those who live under the protection of Muslims, but do not have the same rights and obligations as Muslims. Tayeb stressed that the expression “the people of the covenant” has become irrelevant and obsolete and that Christians are Egyptian citizens with full rights and responsibilities just as Muslims.