Egypt’s Copts dig heels in over right to remarry

Christian Copts are protesting, calling for their religious right to remarry and the necessity to expand the spectrum of the grounds for divorce that they believe the church should recognize. 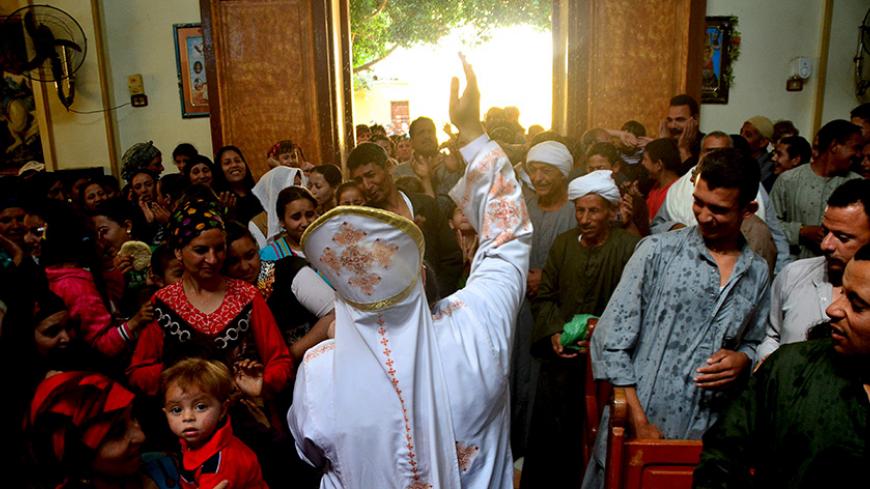 A Coptic Christian priest blesses his congregation with holy water during Sunday service in the Virgin Mary Church at Samalout Diocese in Al-Our village, in Minya governorate, south of Cairo, May 3, 2015. - REUTERS

CAIRO — Dozens of Christian Copts organized a protest inside the Cathedral of St. Mark in the Abbasiya district during the June 3 homily of Pope Tawadros II of Alexandria and patriarch of Saint Mark, the 118th pope for the Christian Coptic Orthodox Church. The protesters shouted, “We want to remarry,” while the priests tried to contain the situation, but to no avail, prompting Tawadros to cancel his sermon.

The protesters were members of “The Victims of the Christian Personal Status Law,” a coalition run by civil-state advocates who are demanding that a civil status law for Copts be drafted to allow Copts to get a divorce and remarry. Egyptian police intervened upon the request of the church and arrested a number of protesters on charges of inciting riots.

The protesters were criticized for desecrating the church and interrupting the homily, which was being broadcast via server satellite channels. The Coptic Church also deemed the protesters’ demands as being in direct conflict with the church’s teachings.

Magdi Mehanna, who spoke for the coalition, told Al-Monitor that the group decided to protest after several futile attempts to meet with bishops to discuss the issue, as security officers denied the group access.

Mehanna said their sole demand is the implementation of the 1938 personal status code bylaws set by the Coptic Church. The guidelines provide nine grounds for divorce and remarriage, including: adultery; absence of a spouse for five years without any news of him or her, or if the wife goes missing and was nowhere to be found — neither at her parents’ or relatives’; if one spouse was a threat to the other; if one of the spouses suffers from a mental illness and is admitted to a psychiatric hospital as a result or if one of the spouses is infected with contagious diseases or the husband is impotent; if a spouse is imprisoned for seven years; in case one of the spouses takes religious vows; and in the event either member of the couple decides to renounce Christianity.

The 1938 bylaws have not been in effect since 1971, when Pope Shenouda, Tawadros’ predecessor, took up his post. Shenouda died in 2012. During Shenouda's papacy, the only ground for divorce recognized by the state was adultery. Adulterers and people who sought divorces on other grounds were not granted the right to a second marriage by the Coptic Church.

Lawyer Ramsis Nagar, the legal representative of the Coptic Church, told Al-Monitor, “The church does not interpret holy matrimony as it suits it, as this sacred sacrament is provided for in the Bible and there is no ground for divorce except for adultery. The party that committed adultery shall not have the permission to remarry, while the other party [the one who was cheated on] shall have the right to remarry. The adulterer’s second marriage is valid as per the civil law, but the church is not obliged to recognize it. In any case, the church does not look into the grounds of divorce except for cases within the context of adultery.”

On the other hand, the Court of Cassation in Egypt ruled that a Christian marriage is only recognized if the ceremony was held in church. Therefore, the state ought to allow those who wish to have a civil marriage to hold ceremonies as they wish, without forcing the church to hold religious ceremonies or recognize that civil marriage.

Legal counselor Mamdouh Ramzi, a Coptic member of parliament in the previous Shura Council, told Al-Monitor, “There are two conditions for granting divorce in the Orthodox faith. First, there is the proof of adultery. Second, in case the wife turned out to be ‘deflowered’ after the consummation of marriage and if the husband is impotent, then there is ground for divorce.”

He added that the case of Copts seeking implementation of the 1938 bylaws is weak and that a judgment is not likely to be issued to their favor, as the church is the only party authorized to annul or recognize a religious second marriage or divorce, or to agree on changing or renouncing one’s sect. He stressed that the judiciary is only responsible for the civil part of the decision, while the ecclesiastical part falls within the church’s purview.

Ramzi also stressed that the church will not give up its right to recognize religious marriages and that even if a court ruling was issued to that effect, it would be nonbinding for the church.

Kamal Zakher, a Coptic expert, told Al-Monitor, “Those who protested inside the church for the right to remarry have knocked on the wrong door, as civil marriage is carried out everywhere in the world and the church has nothing to do with it.”

The problem of the church may be in the management of the crisis itself. The church needs to establish effective channels of communication with the affected Copts to avoid the situation getting worse.

According to a 2006 book by Coptic journalist Karima Kamal, titled “Coptic Divorce," the legislative coup on the 1938 bylaws led by the church leadership via Pope Shenouda, left more than 300,000 Christian families broken and miserable. Copts have gone as far as to claim they have committed adultery so they can get divorces. However, they collided with the church that later refused to grant permission to remarry on the ground that the Copts have sinned in committing adultery, knowing that their crime is a lie. Copts have no chances for a new life with another partner in life.