Easter in Egypt resurrects debate over travel to Israel

In the lead-up to Orthodox Easter May 1, disputes have resurfaced over visits by Egyptian Copts to Jerusalem. 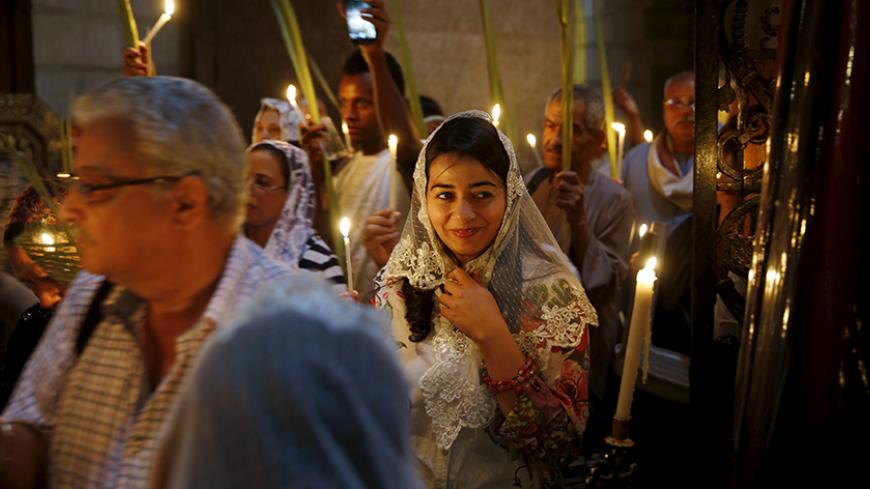 CAIRO — The debate concerning Egyptian Coptic Christians traveling to Jerusalem arises each year in the lead-up to Easter, which is celebrated on May 1 this year in the Orthodox Church. Copts who decide to travel to Jerusalem to visit the holy sites are often accused of "normalization with Israel" and of violating the orders of the Egyptian Orthodox Church, which opposes their travel to Jerusalem. Meanwhile, other churches in Egypt — including the Catholic and Evangelical ones — do not oppose such trips and consider the issue a matter of personal freedom.

The decision to forbid Copts from traveling to Jerusalem dates back to the 1960s during the days of Coptic Pope Cyril VI of Alexandria, and stems from the conflict with Israel over Deir El-Sultan monastery in East Jerusalem. Israel handed the monastery over to the Ethiopian monks after expelling the Egyptian monks in the wake of the June 1967 war. The decision remained applicable in the days of Pope Shenouda III during the session of the Holy Synod on March 26, 1980.

The decision noted that "the Holy Synod has decided not to allow members of the Coptic Orthodox Church to travel to Jerusalem this year during the Holy Week and Resurrection Day until the [Egyptian Orthodox] Church officially gets back Deir El-Sultan in Jerusalem. This decision is automatically renewed as long as the monastery has not been restituted or as long as the synod did not issue a different order."

But the decision took on a political dimension when Pope Shenouda III objected to the Copts' visit to Jerusalem because of his rejection of any normalization with Israel.

After Pope of the Coptic Orthodox Church of Alexandria Tawadros II traveled to Jerusalem to head the funeral prayer for Metropolitan Archbishop Abraham of Jerusalem and the Near East on Nov. 26, he faced accusations that his presence there constituted normalization. He responded by asserting that his visit was merely to pay his respects, and insisted that the Orthodox Church has not changed its mind regarding the ban on Copts' travel to Jerusalem. Pope Tawadros II noted in press statements April 6, "We will not visit Jerusalem unless our Muslim brothers are with us. In the 1967 war and after the 1973 victory and the peace treaty as well as the church's stance in this regard, the Holy Synod issued a ban on traveling to Jerusalem. This is when the idea of not visiting Jerusalem without our Muslim brothers was enrooted."

Pope Tawadros II added, "There are two sides to this story. First, there are almost 3,000 Copts who live in Jerusalem and work in handcrafts. How are these crafts marketed? There are definitely Coptic pilgrims buying these products. Moreover, any visit is a contribution to Palestine's existence. Visiting Jerusalem is good for the Palestinian people and supports them economically.

"The other side of the story is that there are humanitarian cases. For instance, a family whose children live abroad and have non-Egyptian nationalities — and I don't judge them because of that — visit Jerusalem and want to take their parents with them. In such cases, I cannot turn them down. Besides, some elderly people who have humanitarian conditions are allowed to visit Jerusalem."

Yet the question remains, did the pope's visit encourage Copts to follow his lead and face accusations of normalization with Israel?

Rizk said, "Although Pope Tawadros II traveled to Jerusalem in 2015, this did not affect the Copts' travel to the city because Copts already have a strong affinity to visiting holy places. The numbers are constantly rising because the places they can visit are plentiful and amazing for Copts."

Rizk noted, "Due to security measures, young Copts cannot travel to Jerusalem. Most travelers are old. Palestinians mostly benefit from the Copts' visits to Jerusalem that do not have a religious or political purpose. Copts have the right to visit their religious sites."

In statements made prior to Easter 2012, Palestinian President Mahmoud Abbas called on Arabs to visit Jerusalem and said that such visits are in the interest of the Palestinian cause.

Coptic analyst Gamal Assad said in a statement April 20 that the Copts who traveled to Israel doubled in number in 2015. He noted that the pope's visit for Jerusalem to participate in the funeral of Archbishop Abraham pushed this further.

Spokesperson for the Orthodox Church Rev. Boulos Halim said April 19, "The church hasn't changed its stance regarding the Copts' travel to Jerusalem. There is a spiritual punishment for those who breach the church’s orders."

He added, "The church only allows travel for the elderly for humanitarian purposes. It does not grant permits otherwise."