The Coptic Church confirmed that its position regarding the ban on Copts visiting Jerusalem is unchanged, despite the travel of Pope Tawadros II to the city to attend the funeral of Bishop Anba Abraham. 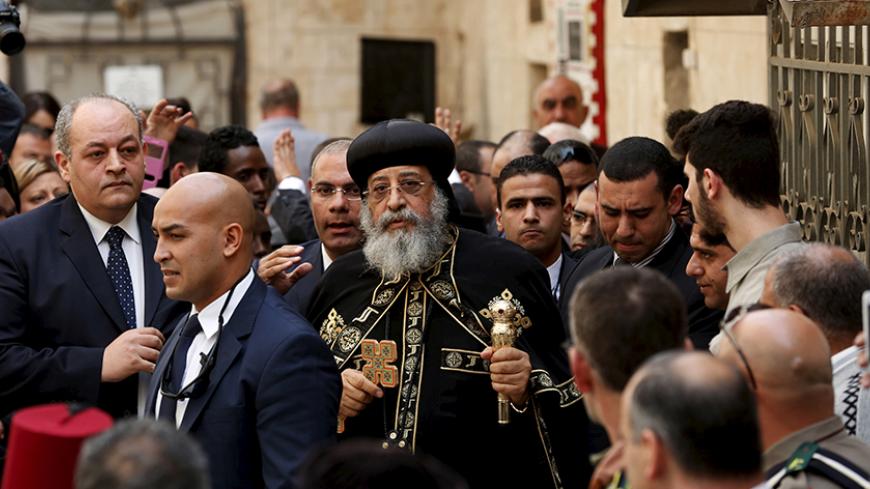 The visit by the head of the Egyptian Coptic Orthodox Church, Pope Tawadros II of Alexandria, to Jerusalem on Nov. 26 to preside over the funeral prayer of the late bishop of Jerusalem, Anba Abraham, sparked controversy among Coptic and political circles, with some arguing that the visit runs contrary to an existing ban issued by the church itself.

Several political parties issued statements denouncing Tawadros’ trip. In a statement released Nov. 26, the left-wing Nasserist Dignity Party described the visit as “a deep crack in the wall of resistance to normalization” with Israel. Meanwhile, Younes Makhioun, head of the Salafist Nour Party, posted a statement to his official Facebook page Nov. 28 in which he described the visit as an encroachment on patriotism for all Egyptians — be they Muslim or Coptic — since the church and the Copts are part of the Egyptian national fabric.

The visit was also denounced by a number of public figures. Former presidential candidate and head of the Strong Egypt Party Abdel Moneim Aboul Fotouh described the visit as “normalization with Israel” in a tweet Nov. 27. Former presidential candidate Hamdeen Sabahi confirmed that the pope's visit to Jerusalem weakens the national value of the church, while the head of the Egyptian Journalists Syndicate, Yahya Qalash, announced the syndicate's objection to the visit.

The Orthodox church justified Tawadros’ decision in a Nov. 28 article written by church spokesman Father Boulos Halim and published in the daily Al-Masry Al-Youm. In the article, titled “The patriotism of the Egyptian church, the nation’s identity and the media’s fantasy,” Halim stressed that the Egyptian Coptic church has “proven its patriotism throughout history.”

He also asserted that the church’s stance on visits to Jerusalem remains unchanged: Copts will only travel to Jerusalem with all other Egyptians, and the pope’s visit was restricted to the funeral prayer.

The ban preventing Copts from traveling to Jerusalem can be traced back to the 1960s. Following Egypt’s defeat in the 1967 war, Pope Cyril VI expressed his opposition to visiting Israel. In 1978, following the signing of the Camp David Accords between Egypt and Israel, Coptic Pope Shenouda III issued a papal decree forbidding church members from visiting Jerusalem. Violence against Copts had increased in the 1970s, as then-President Anwar Sadat was embracing Islamist groups as a counterweight to leftist and Nasserist opposition. Amid widespread Arab opposition to the new peace agreement with Israel, the church likely feared that Copts visiting Israel would spark animosity toward them.

Speaking from Jerusalem on Nov. 26, Tawadros said he does not believe his presence in the city constitutes a pilgrimage since it was not planned in advance. He explained that the visit was rather a humanitarian duty and a sign of loyalty to a person who served the nation and the church, and condolences must be paid to his subjects.

The Orthodox church announced in a statement Nov. 28 that Tawadros had declined an invitation by Palestinian President Mahmoud Abbas to visit Ramallah during his trip. According to the statement, the pope would not visit Palestinian territories or Jerusalem as a visitor, “unless accompanied by the grand imam of Al-Azhar.”

Halim added, “The body of late Anba was supposed to be transported to Egypt where the pope was supposed to hold the funeral ceremony, but Anba’s will was to be buried in Jerusalem. Had it not been for this, the pope would not have had to travel there.”

He explained that the funeral prayer is an integral part of pastoral action and in accordance with the church’s traditions, the pope is obliged to perform this service, as otherwise he would not be fulfilling his duties toward his people.

“The church does not take into account any political equations and therefore all of its activities are out of its pastoral and national duties. The visit to Jerusalem has no political connotations,” Halim said.

Immediately following Tawadros’ return from Jerusalem to Cairo, the church responded to criticism via a statement on Nov. 29, stating that Tawadros did not enter Jerusalem with an Israeli visa since there was coordination with the Palestinian Authority to enter without one. The statement added, “Pope Tawadros II did not meet with any officials from either the Israeli or the Palestinian side during his stay in Jerusalem. There shall be no room for speculation or propaganda on the concept of normalization [with Israel].”

Mina Thabet, the manager of the minorities program at the Egyptian Coordination of Rights and Freedoms, told Al-Monitor, “Pope Tawadros II did not go to Jerusalem on vacation, to visit tourism attractions or for a religious pilgrimage. He went to perform religious rituals under very special and specific circumstances: the death of the bishop of Jerusalem who was of great value to the Coptic Orthodox Church.”

Thabet noted that he personally has no problem with peace with Israel on the condition that it is based on justice and equality of rights. He also expressed his belief that the visit will not affect the relationship between Muslims and Christians.

However, not everyone agreed. Speaking by phone on al-Ghad al-Arabi channel Nov. 28, journalist Abdullah al-Sinawi said, “This visit will be exploited by the radical currents as a card against the Egyptian church to create a state of sectarian divide that may reach the point of accusing Coptic currents of committing treason and normalizing relations with Israel.”