The small Egyptian Christian community in Jerusalem was pleasantly surprised and encouraged by a visit from Pope Tawadros II. 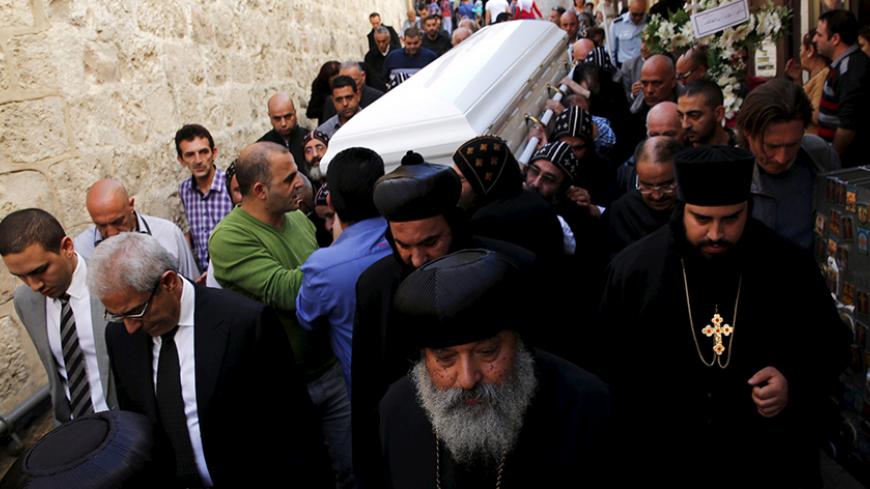 Coptic Christians carry the coffin of Bishop Anba Abraham, Coptic Orthodox metropolitan archbishop of Jerusalem and the Near East, during his funeral in Jerusalem's Old City, Nov. 28, 2015. - REUTERS/Ronen Zvulun

Members of Jerusalem's small Coptic Christian community were thoroughly surprised when the leader of the worldwide Coptic Orthodox Church broke a papal-imposed boycott and visited them. The arrival of Pope Tawadros II followed the death of Bishop Anba Abraham, the longtime spiritual leader of the Coptic church in Jerusalem and Palestine. The pope officiated at the funeral service held Nov. 28 in Jerusalem, where the bishop had requested to be buried.

Abraham, who became a priest in Egypt in 1990 and was appointed to head the Church of the Holy Land in 1992, died Nov. 25 at the age of 72. Church officials told Al-Monitor that given the high rank of the bishop in the church, his funeral service could not be performed by priests or even bishops of the same rank — only by Tawadros.

For the past 30 some years, the spiritual leadership of the Coptic church has banned visits to occupied Jerusalem. This came about in part because in 1970 the Israeli police allowed monks from the rival Ethiopian Church to take over the Deir es-Sultan Monastery, located on the roof of the Church of the Holy Sepulchre. At the time, the Israelis were involved in a war of attrition, and Ethiopia was an Israeli ally. The situation has remained unchanged, despite the 1979 peace treaty between Israel and Egypt.

During this year's Easter celebrations, some 5,000 Copts from around the world made the pilgrimage to Jerusalem despite the church-imposed boycott. Most of those arriving came from countries other than Egypt. Two years ago, the number of pilgrims reached 15,000, according to press reports.

Yusef Daher, executive secretary of the World Council of Churches’ Inter-Church Center, told Al-Monitor that the ancient Coptic church is well respected. He remarked, “It is represented in various forums and is recognized by Israel, the Palestinian government and Jordan as one of the 13 historic churches of Jerusalem.”

According to Daher, there are 2,500 Copts in Palestine and Israel. Well-known Palestinian Christian families, including the Quptis, Hannas and Fellmons, are Coptic Orthodox. “A new church has just been built in Ramallah to accommodate Coptic Orthodox lay people in Palestine,” Daher said.

Simon Azazian, public relations director at the Palestinian Bible Society, told Al-Monitor that the Coptic church has made important contributions to Palestinian society. “Many Palestinian students have gone through their fairly good school in the Old City of Jerusalem and the Jerusalem School at the St. Anthony College building in Beit Hanina.” Azazian, whose master’s thesis is on the row over Deir es-Sultan, also remarked that many local Christians approach Coptic priests for spiritual direction and advice.

“The general feeling I get from the community is that Coptic clergy have a distinguished, true faith. They are able to explain the Bible in clear Arabic, and they are Orthodox, which makes them acceptable to the majority of Palestinian Christians, who belong to the Orthodox denomination. The role of the Coptic priests in the Old City has been truly distinct when it comes to visiting homes of the sick and the needy,” Azazian said.

Issa Kassisieh, the Palestinian government’s representative for Christian affairs and ambassador to the Holy See, told Al-Monitor that Coptic Christians are an integral part of the Palestinian fabric. He said, “The Coptic church is part and parcel of the local church and a leading church in the Holy Land. Lately, Bishop Abraham had worked hard on revitalizing the presence of the Coptic church in Palestine, and we have seen real projects take place in Palestine, including educational institutions and renovation of churches and buildings in the Old City.”

Kassisieh said that Abraham had had a vision that the Copts of Egypt would eventually come to the Holy Land and that he had worked on preparing the infrastructure for huge pilgrimages in the future. The Palestinian official especially welcomed the visit by Tawadros to Jerusalem. Noting that although the spiritual leader's presence was limited to Abraham's funeral, Kassisieh suggested that the church is more open to the idea of visiting the Holy Land.

“We consider such visits to be supportive of pilgrimage at a time when we see forced emigration from the Holy Land because of the separation wall,” said Kassisieh. “For us, this visit is strengthening the living stones, which is the dwindling Christian community in Palestine.”

The role of Copts in Jerusalem is intertwined with their long presence in the holy city. They have lived there since the early days of Christianity and have left their mark in different Palestinian towns, including a new church in Ramallah and their older convent in Jericho.

Officials interviewed by Al-Monitor said that Abraham had been quite distinguished. They recalled him to be a priest with charisma and a long history of standing up in Israeli courts to fight vigorously for Deir es-Sultan. When in the last few years his health deteriorated, the Coptic community in Jerusalem reportedly felt deserted by the church.

A Jerusalem-based source requesting anonymity told Al-Monitor that a split has been emerging in the last few years within the Coptic community, with local Copts requesting that the church do more regarding housing and employment. According to the source, the community hopes that the new bishop, yet to be appointed by Tawadros, as well as the visit by the pope will help resolve some of the community's problems.