The Old City of Jerusalem is expected to be extremely crowded this year as all the churches will celebrate Easter on the same schedule, renovations have attracted a higher pilgrim turnout and Passover visitors will add to the throngs. 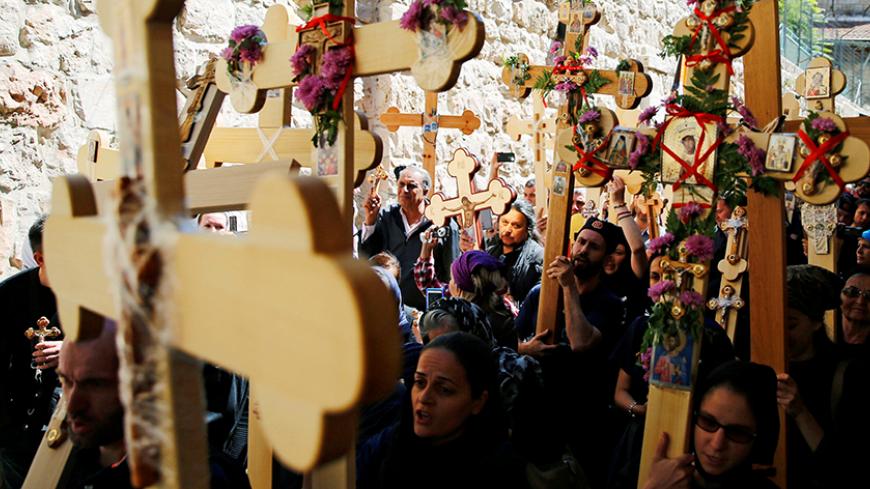 Orthodox Christian worshippers hold crosses before a procession along the Via Dolorosa on Good Friday during Holy Week in Jerusalem's Old City, April 29, 2016. - REUTERS/Ammar Awad

Religious and secular leaders in Jerusalem are expecting a sea of people crowding the Old City this month. Palm Sunday falls on April 9, marking the beginning of the Christian Holy Week culminating with Easter, when Christians around the world celebrate the death and resurrection of Jesus. This year, Catholics and Protestants, as well as Eastern Orthodox churches, agree to celebrate Easter on the same day.

Calculating Easter is complicated. In 325 C.E., the Council of Nicaea, a gathering of Christian bishops, decided that the remembrance of the resurrection of Jesus would be held the first Sunday after the first full moon occurring on or after the vernal equinox. The date for the vernal equinox was based on the ecclesiastical approximation of March 21. If the full moon falls on a Sunday, Easter is delayed a week. When the calendar was adjusted during the reign of Pope Gregory XIII in 1582, Eastern Orthodox churches continued to go by the Julian calendar. Now, every few years, Easter falls on the same day in both, and in 2017, all Christians will celebrate Easter on April 16.

Issa Musleh, the spokesman of the Orthodox Patriarchate in Jerusalem, said that the Old City of Jerusalem will be even more crowded for another reason. He told Al-Monitor, “For the first time in 200 years, the three main churches — Orthodox, Franciscan and Armenian — agreed to have the holy grave refurbished.”

Musleh said that the newly renovated tomb was opened to the public in a ceremony attended by church and other leaders. “The opening on March 22 was attended by Jordanian Minister of Interior Ghaleb Zoubi representing King Abdullah; a representative of Greek Prime Minister Alexis Tsipras and a representative of Pope Francis; Palestinian Minister of Jerusalem Affairs Adnan al-Husseini; and the PLO Executive Committee member responsible for church affairs, Hanna Amireh.”

Since 1979, Egyptian Copts have refrained from visiting Jerusalem in response to the call by late Coptic Pope Shenouda III for Copts to boycott Jerusalem in protest over Israel taking the Deir al-Sultan chapel and turning it over to the Ethiopian Church in 1970. Current Pope Tawadros II visited Jerusalem in November 2015 to participate in the funeral of Bishop Anba Abraham.

Palestinian leaders interviewed by Al-Monitor expect multiple Israeli restrictions this Easter, which also coincides with the Jewish holidays. Bernard Sabella, a member of the Palestinian Legislative Council and a sociology professor at Bethlehem University, told Al-Monitor that security will be tighter both within and beyond the Old City.

“Because of the Jewish Passover holidays, Israel will be restricting Palestinians from the West Bank and Gaza from entering the entire city of Jerusalem,” he said. Sabella added that the measures will affect not only Palestinians, but also foreign pilgrims.

Faltas told Al-Monitor that the three churches have agreed to manage access to the Church of the Holy Sepulcher. “Throughout the Holy Week, entry will not be restricted. But on Holy Fire day, April 15, each church will be able to give permits to its faithful to control who will be allowed into the church,” he said.

Loay Saeed, director of the Jerusalem-based nongovernmental organization Seeds of Better Life, told Al-Monitor that his volunteers will be deployed during the Holy Week to help pilgrims and others trying to reach their destinations in the Old City. He explained, “We will have volunteers at all the checkpoints with the hope of facilitating movement and access for people to get to their places of worship.”

Nashat Filmon, director of the Palestinian Bible Society, which serves local Palestinian communities, told Al-Monitor that his organization will be active during this period to help bring Christians together. “Our goal is to contribute to the unity of the church and to support the faithful, especially among the youth and children.”

Filmon said that the Bible Society activities in Jerusalem and the rest of the West Bank center on the local youth. “We believe that young Palestinian Christians have a role to play by staying put in Jerusalem so as to contribute to a pluralistic, healthy and believing society.”

The Easter celebrations in Jerusalem are known for being colorful and uplifting. This year will be no different, even with the huge crowds.