Not all Coptic youths on board with church's support of Sisi

As Egypt's presidential election approaches, some Coptic youths have decided to boycott the polls even as the Orthodox Coptic Church seems to be taking a strong stance in favor of President Sisi. 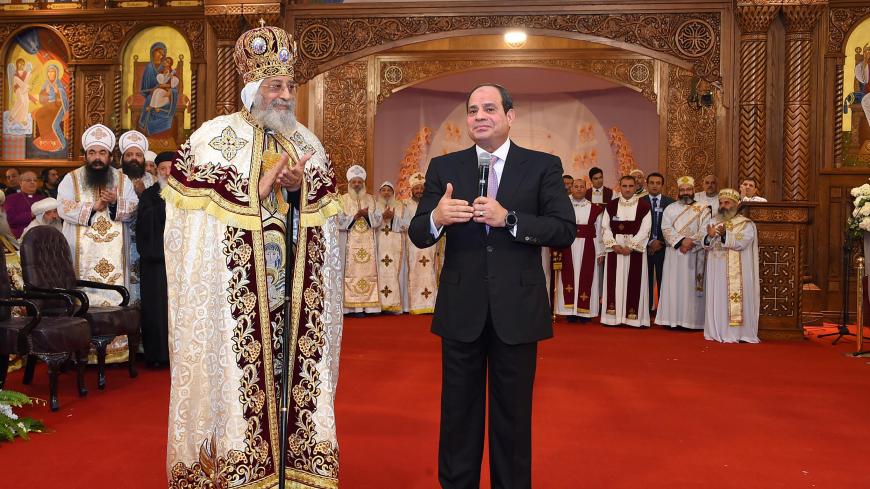 CAIRO — The last time Bishoy William went to church was two years ago. Like many of his peers in Egypt, he does not support the Coptic Orthodox Church’s strong political stance in favor of Egyptian President Abdel Fattah al-Sisi's regime, despite its economic and political policies. They believe that these policies have failed to satisfy a large part of the Egyptian public.

The presidential election that is due to take place on March 26-28 has stirred controversy in the media and within the Coptic community. While the Coptic Orthodox Church seems to endorse Sisi most of all other religious institutions, the Coptic youths have differing stances toward the achievements made during Sisi's first presidential term. Some perceive that in comparison with the years that followed the January 25 Revolution, Sisi managed to bring safety to the Coptic Christians; others complain about the country’s economic situation and controversial rapprochement between the church and the ruling regime, and believe that the government has failed in countering terrorism.

“Sisi has lost the Copts’ support, especially that of the youth, due to the disappointing economic performance and deteriorating security situation over the past four years,” said Mina Thabet, a social science researcher at the University of Aberdeen.

He told Al-Monitor that despite the lack of accurate figures in this regard, a great number of Coptic youths will not vote in the presidential election because of the regime’s failure in fulfilling the main promise of halting terrorism and safeguarding the country's minorities.

William, 28, is a member of a middle-class Coptic family residing in Heliopolis, Cairo. Unlike his father, he does not want to vote for Sisi. He was previously planning to vote for Khaled Ali, but now that Ali has withdrawn, he is boycotting the polls.

William told Al-Monitor, “Economic difficulties prevailed over the past four years. Prices have increased twofold, the government has lifted subsidies on many goods, floated the Egyptian pound and imposed taxes on repetitive occasions. In addition, the economic ventures are ineffective.”

Although he views that Egypt’s security institutions succeeded to ensure “an acceptable security level” at the churches during Sisi's rule, the ongoing terrorist attacks and state failure in eliminating extremists, particularly in the Sinai Peninsula, raise skepticism of the regime’s willingness to dispose of extremists.

A university student at Cairo University's Faculty of Economics and Political Science shares the same desire to boycott the elections. She told Al-Monitor on condition of anonymity that unfortunately Sisi has not provided the Copts with the needed protection or improved the economic situation after floating the pound.

Abanoub Emily views things differently. He believes that Sisi has made great achievements while in office, particularly when it comes to securing the churches and delivering several positive messages in an effort to raise the status of the Copts who are viewed as “second-class citizens” in the country.

Emily, 27, an importer of garments whose business activity was affected by the rising prices and customs duties, believes that Sisi’s economic reforms consist of a significant first step on the right track. He told Al-Monitor that Sisi has taken measures that no other president dared to take.

Emily recounted what he felt when he saw on TV Sisi joining Pope Tawadros II for the Coptic Christmas Eve mass in the cathedral that was built by the army in the administrative capital. He said that Sisi is the first president to join the Christians in their celebrations, adding, “The churches burnt during the chaotic incidents in 2013 were reconstructed by the army at the latter's own expense.”

He stressed that he will vote for Sisi in 2018, as he did in 2014, as he does not want to experience any further acts of hostility against the Copts as happened under the rule of former President Mohammed Morsi.

While a number of bishops announced in late January their support for Sisi in the 2018 election, Hazem Tawfik, one of the founders of the pro-Sisi "To Build It" campaign, said that the Coptic Church fully endorses the campaign. In a January interview on "Sabah al-Kheir Ya Masr" ("Good Morning Egypt") on state TV, Pope Tawadros II said, “Sisi is a maestro conducting a large orchestra and achieving tangible results.”

William added that the elderly who grew up respecting former Egyptian President Gamal Abdel Nasser’s values and principles, and the religious among the Copts who embrace the church's stance, are the first to support the regime.

Thabet explained that the elderly population grew up in Nasser’s socialist military state and are mostly employed in the public sector; they fear the unknown and opt for stability under a nonsectarian ruler.

William recalled that during a political discussion with his father over the dissatisfaction with the current regime, his father said, “Obey your leaders and submit to them” (Hebrew 13:17). William laughed at the irony of the situation, as his father had forgotten about this verse while Morsi was in power.

Such an alignment between the church and the state has angered many Coptic youths. On Jan. 27, Thabet criticized on his Facebook page Bishop of Assiut Anba Youannes, saying, “The Copts are living their best era.” He noted that the priests are being used by the state to silence the Copts at every incident and crisis and are no longer serving the congregation, but rather exercising their authority over them.

He told Al-Monitor, “What is wrong with the church endorsing the president? He is the current president at this critical time that Egypt is going through.”

Halim highlighted the current government intrinsic achievements in an effort to justify the church’s stance. He said, “Major projects are being implemented in all parts of Egypt starting with the administrative capital, the roads network in all governorates, the Suez Canal and the Sinai reconstruction plan. All of these projects are a pointer in the major development process in Egypt that lay the foundations for a better future.”

According to him, Sisi’s achievements are not only limited to the development sector. Rather they reached the Copts. He explained, “Sisi is the first Egyptian president to visit the cathedral during the [Christmas Eve] mass. He is the first to announce the construction of a cathedral, the first to underline the term citizenship and the first to bring them justice. He is also not sectarian.” Halim pointed out that not only the Copts were targeted by the attacks during Sisi’s early term, but so were the police, the military and Al-Rawda Mosque.

In September 2016, 870 activists, mostly Christians, signed a statement denouncing the church’s involvement in the political process in favor of the regime. They criticized the Coptic Orthodox Church’s and Evangelical Church’s call on Copts in the United States to gather in front of the United Nations headquarters in New York in support of Sisi while attending the UN General Assembly meeting the same month. According to the statement, these activists refuse that the church represents the Copts.

Halim said that those lambasting the church “do not represent all Copts" and lack a clear and comprehensive perception of what is really happening on the ground.

For others, such an alignment is worrisome. Imad Rida, a youth from Minya governorate where the monastery’s incident occurred in May 2017, told Al-Monitor, “Because of the clergy, Christian youths are now torn between the regime and the church, which has resulted in many refraining from going to church.”