Terrorist attacks targeting Egypt’s Copts have raised questions about the regime’s ability to safeguard them and whether President Abdel Fattah al-Sisi will be able to sustain their support. 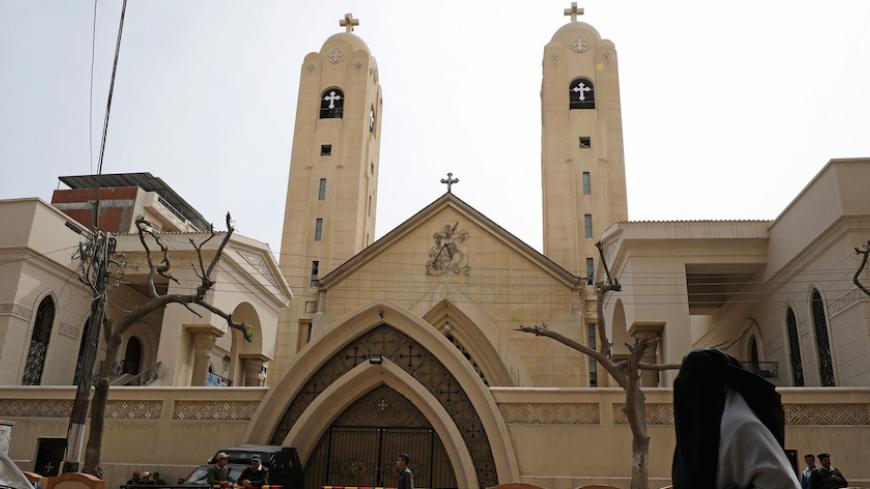 A woman passes in front of the Coptic church that was bombed in Tanta, Egypt, April 10, 2017. - REUTERS/Mohamed Abd El Ghany

CAIRO — Two weeks after suicide bombers killed at least 48 people and wounded more than 100 in twin bombings at cathedrals in Egypt, Christian support for President Abdel Fattah al-Sisi appears to be wavering.

Those bombings came only four months after a deadly Dec. 11 blast at St. Peter and St. Paul Church in Cairo.

The twin bombings, for which the Islamic State (IS) claimed responsibility, pose the type of challenge Sisi needs to overcome, given that he had vowed to crack down on extremism and protect the Copts, who make up 10% of Egypt’s population of about 83 million people. Some Muslims have burned Christian homes and churches in the past in several parts of Egypt, but fear has been spreading even more quickly among Christians since IS started targeting them.

Suzy al-Nashed, a member of parliament for the Egypt Support Coalition, told Al-Monitor by phone that Christians, in general, are targeted because of their stance favoring the June 30 Revolution in 2013, their support of Sisi and their contribution to the ouster of then-President Mohammed Morsi.

But George Isaac, a member of the National Council for Human Rights, told Al-Monitor that Sisi's popularity has declined significantly among Christians.

"The people are disgruntled about what's happening. A comprehensive strategy is required to counter terrorism," he said. “I now have a different perspective toward the regime. An adequate candidate other than Sisi will have my vote in the next election. In case there is no suitable candidate, I will not be voting.”

Ishak Ibrahim, a religious freedoms researcher with the Egyptian Initiative for Personal Rights, told Al-Monitor by phone that the Egyptian church’s position so far is neither for nor against the state. He said people are just trying to cope with their sadness and anger over the bombings.

He added that the state should have taken measures to protect the Copts more effectively and must address the continued terrorist and sectarian threats against Christians’ security and safety.

Security is clearly being neglected, he said, which is causing such incidents to occur repeatedly. Also, “We need to rectify misconceptions within Egyptian society in order for it to [resist] sectarian attacks. The thing that happened in Minya reflects these misconceptions,” he said, referring to the sectarian attack April 13 in the village of Koum al-Loufi in Minya governorate just days after the April 9 blasts. Several Coptic worshipers were injured by stone-throwing villagers.

Condemning that incident, he asked why Copts should be prevented from practicing their religion, especially when they are legally licensed to do so. He pointed out that Christian citizens do not enjoy full civil rights, and he worries that attacks could lead a segment of the Christian community to distance themselves from society.

Answering a question on whether Christians will vote for Sisi in the upcoming elections, Ibrahim said, "It is a matter of political choice. Every citizen has the right to choose whomever he wants.” He said he hopes the church won't push Copts to vote a certain way and that politicians won't use fear to influence them.

Speaking to Al-Monitor by phone, Islamist author Najeh Ibrahim agreed with Ishak Ibrahim that repeated terrorist and sectarian attacks targeting Egypt’s Copts could lead them to isolate themselves. He noted the continuing danger posed by IS, which is aware that churches are soft targets. Security is also complicated by the challenge of searching all worshipers on holidays.

"The regime is preoccupied with the political conflict, and such attacks would reappear should the current regime fail to provide a more tolerant political environment,” he said. He believes Christians won't support Sisi as they did before his rise to power.

Speaking to Al-Monitor, Bishop Anba Macarius of the Coptic Orthodox Minya Diocese demanded that measures be taken to protect Copts from “the wave of violence.”

The bishop added, “A culture change is required to bring about coexistence and tolerance. The Copts continue to suffer from religious discrimination in some parts of Egypt, and some are denied specific jobs. The state needs to enforce the law."

However, he doesn't believe terrorist or sectarian attacks will prompt Copts to become isolated. “They will continue to be active and to coexist and cooperate with their brethren at home,” he said, stressing that a large segment of the Copts have faith in the political leadership and will continue to support it.

Parliament member Nashed also believes "widespread extremist ideas and intolerance will not drive Christians into isolation.” However, she said more protection is definitely required at churches due to systematic attacks. She considers the suicide bomber's ability to enter St. George’s Cathedral a serious security oversight.

Like the bishop, Nashed pointed out that there are protective laws on the books that haven't been implemented in some parts of Egypt. She sees the need for a commission against religious discrimination, as called for in the Egyptian Constitution.

Asked if she will support Sisi in the next election, she replied, “We voted for him because he saved us from a regime embracing extremist ideas. I have not, however, decided yet whether I will vote for him in the upcoming elections.”

Speaking on condition of anonymity, a Cairo citizen told Al-Monitor he is disappointed in Sisi. “Based on what he has done over the past three years, I will definitely be voting for a candidate other than Sisi,” he said. The man's father, however, said, “I think Sisi deserves another chance. I will vote for him if he runs in the next elections.”