Who was behind Cairo church bombing?

Authorities have arrested suspects in a weekend attack on a Coptic church in Cairo, as Copts call for the government to deliver on promises to protect the religious minority. 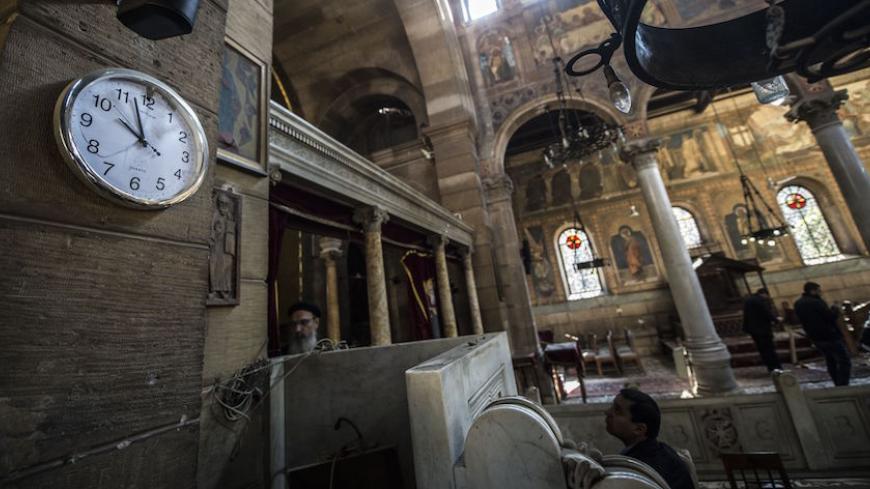 Egyptian security forces and members of the clergy inspect the scene of a bomb explosion at the St. Peter and St. Paul Coptic Orthodox Church on Dec. 11, 2016, in Cairo's Abbasiya neighborhood in Egypt. - GETTY/Khaled Desouki

CAIRO — Egyptian officials said today they have arrested four suspects and identified a man they believe to be the suicide bomber responsible for a blast that ripped through a Coptic church in Cairo Dec. 10, killing 25 people and wounding dozens of others.

On Dec. 12, the authorities said they had arrested three men and a woman and were searching for two more people in connection with the bombing. No group as of yet has accepted responsibility for the attack.

During a state funeral ceremony for the victims Dec. 12, President Abdel Fattah al-Sisi said a terrorist identified as Mahmoud Mostafa wore an explosives-laden vest in the attack.

That account differs from earlier security and eyewitness reports that a woman had carried a bomb containing 12 kilograms (26.4 pounds) of TNT inside her bag and placed it under women’s chairs in the prayer hall. That would have explained why most of the victims were women and children, according to the Egyptian Ministry of Health.

The incident occurred despite officials’ ongoing security and political reassurances to protect Copts, who held protests over the security situation in this specific case. Some survivors told Reuters that police had not performed the usual security inspections at St. Peter and St. Paul Church Dec. 10, which is adjacent to St. Mark’s Cathedral — the residence of Coptic Pope Tawadros II.

The state of security alert declared by the Ministry of Interior to find the perpetrators did not quench the thirst of Copts and the bereaved families. They gathered all day Saturday in front of the blast location and condemned “the terrible slackening” of the security forces in protecting the church.

The feelings of rage and tension were relayed in conflicting chants that Copts repeated. Some condemned Interior Minister Majdi Abdul Ghaffar and demanded his departure, calling his agency the Ministry of Thuggery. Dozens called on Sisi to step down, while others repeated slogans of national unity such as “Muslims and Christians stand united.” Some protesters rejected such unity slogans. “Churches and mosques are on the same page, but Copts do not burn down mosques,” they shouted.

Church leaders tried to calm protesters. Rev. Makary Younan, the pastor of St. Mark’s Church in Azbakeya, called on the crowds to end the protests, while he stood among them surrounded by officials and guards. He said, “We must not protest. We should rather show love to Muslims to protect Egypt.”

He added, “People of the church, obey the president and listen to his wisdom so that he gives us our rights.” He condemned calls for protest, saying, “It is our religious duty to obey our presidents and sultans.”

But all pleas for calm went downhill. Protesters grew all the more angry and called for punishing the culprits. They blamed the state and security apparatus completely for failing to protect Copts. Some clashed with police.

“The church asks us to forgive and love all the time. But with such loving behavior, we will only reap more pain, bloodshed and endless crimes,” Mary Hanna, a Copt, told Al-Monitor. “We want answers about how such an amount of explosives got through to the prayer hall. … Why has the state allowed the proliferation of centers spreading anti-Christian thought in Egypt?”

Many analysts believe the Muslim Brotherhood and its followers target Copts to retaliate against the stance Copts took on June 30, 2013, when they supported Sisi and backed the ouster of Mohammed Morsi and isolation of the Muslim Brotherhood from political life. Analysts say these reasons are behind repeated Muslim Brotherhood affiliates’ bombings of churches after Morsi’s ouster on Aug. 14, 2013, and following the dispersion of the Rabia al-Adawiya sit-in, when more than a hundred churches were either burned or destroyed in sectarian attacks.

Copt Kamal Zakher, founder of the Coptic Secular Current, told Al-Monitor, “The incident is a political crime … and the [Brotherhood] cannot forget that Copts were a focal element of the state on June 30 when they supported Sisi. There are constant endeavors to disintegrate this axis and shake security by targeting Copts.”

Zakher said, “The feelings of anger toward security leaders and officials are only normal and in line with the heinousness of this [current] calamity. The state’s attempts to contain the situation will not be accepted, no matter what the compensations and regardless of all the talk about national unity or the traditional and old methods of appeasement.” He added, “The only way to buffer the Copts’ anger is by handing over the real culprits.” He did say he expects the church itself to react calmly.

Ishac Ibrahim, a researcher on freedom of religion and belief in the Egyptian Initiative for Personal Rights, told Al-Monitor, “Repeating expressions of love will not silence anger, which is gaining momentum among Copts.”

He added, “The clear security instability and extremism against Copts is an old story. Yet the security apparatus has failed to end it.”

Questions remain about the state’s political stance and silence regarding the provocative rhetoric of some Salafi leaders against Copts. The Coptic issue has been considered a national security matter since former President Hosni Mubarak’s days. Many observers dispute the claim that terrorists target Egyptians without discrimination, not just Copts. They say the issue will not be settled until the political administration steps in to protect the rights of Copts and contain Christians’ growing rage.