What do recent attacks mean for future of Egypt's Christians?

Sectarian attacks against Christians in Egypt have increased recently, with the police downplaying these incidents that go largely unreported in the mainstream media. 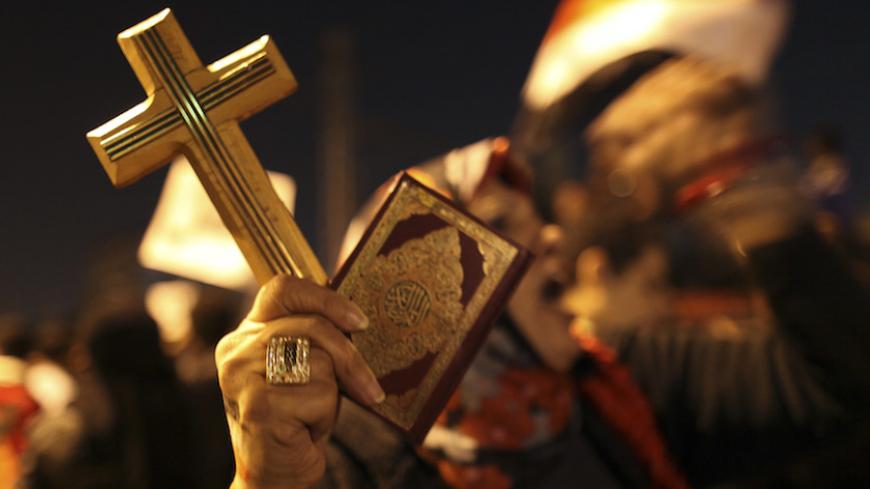 A woman holds a copy of the Quran and a cross as she shouts slogans during a demonstration against Egypt's President Mohammed Morsi in front of the presidential palace in Cairo, Dec. 18, 2012. - REUTERS/Khaled Abdullah

An Orthodox Christian nun from Mar Girgis Monastery in Old Cairo was killed July 5 after reportedly being hit by a stray bullet in an exchange of fire on the Cairo-Alexandria Highway. A man and his son were also injured in what Egyptian media has described as a “revenge attack” by gunmen.

Nearly a week after the tragic incident, little is known about the circumstances of the nun’s death and the identity of the assailants remains undisclosed. To stave off skepticism, local media have said that this was not a sectarian attack and that the nun had not been deliberately targeted. ”She was caught in the crossfire,” the semi-official Al-Ahram reported a day after the attack.

Tensions have long simmered between Muslims and Christians in Egypt and sectarian attacks have escalated since the Arab Spring. In recent weeks and months, there has been a marked increase in religiously motivated violence — a cause for growing concern for rights groups and Egypt’s estimated 9 million Christians (the Middle East’s largest Christian community). The rising tide of anti-Christian sectarianism in Egypt has generally been underreported by the country’s mainstream media, which has been peddling the official narrative that “Muslims and Christians are one people, united by a common history and destiny." Police, meanwhile, deliberately downplay the sectarian strife and at times, and even cover up attacks on Christians by not documenting them as such. Moreover, the perpetrators of such crimes often escape justice. In the last five years, churches and homes of Christians have been burned and entire families have been forcibly evacuated from their villages or have had to relocate to flee persecution. During the period of Islamist rule in Egypt, increased insecurity and fear of persecution prompted thousands of Christians to leave the country, seeking safety and greater freedoms overseas.

Meanwhile, a fresh spate of attacks on Christians in recent weeks has left the country reeling from shock. On June 30, a priest was shot and killed by a gunman outside a car repair shop near St. George’s Church in the North Sinai town of el-Arish. It was the latest in a string of attacks on Christians in the volatile region where the military has been fighting an Islamist insurgency since the ouster of President Mohammed Morsi in July 2013. The Islamic State (IS) claimed responsibility for the priest’s death in a statement published on social media, describing him as a “disbelieving combatant.”

The fatal shooting and the subsequent IS claim of responsibility were a grim reminder of the February 2015 IS beheadings of 21 Egyptian Christian migrant workers, earlier abducted in Libya. The fact that the priest in this latest attack was killed by IS on home soil raises the alarm over the increased vulnerability of Egypt’s beleaguered Christian community at home.

“Copts in Egypt face persecution and discrimination,” said software engineer and blogger Mina Fayek. He told Al-Monitor over the phone from Amsterdam, “The government does very little to protect Christians.”

In late May — in violence that was closer to a re-enactment of a medieval torture scene than reality — a 70-year-old Christian woman was stripped naked by a mob of 300 Muslims and paraded through the streets of her village in the conservative southern province of Minya. The assault was provoked by rumors that the woman’s son was involved in a love affair with a Muslim woman. The level of cruelty of the crime against the elderly woman sparked outrage on social media with the trending Arabic hashtag #EgyptStrippedNaked being used by activists to express solidarity with the victim.

Analysts believe that the worrisome spike in persecution of Coptic Christians is the price Christians are paying for supporting President Abdel Fattah al-Sisi and particularly for their stance on the military-backed protests that led to the overthrow of Morsi. Indeed, Christians had seen then-Defense Minister Sisi as their savior from the Islamists and had thrown their full weight behind his candidacy for president. In August 2013, when at least 800 Morsi supporters were killed by security forces in the violent dispersal of two pro-Muslim Brotherhood sit-ins in Cairo, scores of Brotherhood supporters went on a rampage, burning churches and destroying property of Christians in "revenge attacks" in several parts of the country, according to local media reports.

Admittedly, Sisi has tried harder than his predecessors to win over Christians: He has vowed to bring the perpetrators of anti-Christian attacks to justice and has promised to rebuild churches damaged in sectarian attacks during the Morsi era. He has also twice paid “surprise visits” to the cathedral to greet Christians during Orthodox Christmas Mass services. His words to the cathedral’s congregants in January 2015 when he declared, “We are all Egyptians in the first place” had moved some of the Christian faithful attending the service to tears.

But others such as Fayek took the words with a grain of salt and say they are deeply disappointed.

“Sisi is full of sweet talk but he has yet to deliver on his promises. He’s done little more than pay lip service to end the discrimination against Christians who have yet to gain access to high-ranking positions in universities and in the security establishment. Imagine being excluded because of your faith,” Fayek said.

He also reminds Sisi apologists that soldiers who violently dispersed a Christian sit-in outside the Maspero State TV building in October 2011, killing 26 Christian protesters, have yet to face justice.

Another Christian, rights lawyer Nabil Ghabriel, told Al-Monitor, "The government’s oppressive policies vis-a-vis Coptic Christians have remained unchanged for decades regardless of who is in power.” Ghabriel added that Sisi was trying to appease the ultraconservative Salafists who supported Morsi’s ouster and had unified ranks with the liberal opposition against the ousted Muslim Brotherhood president.

“Sisi is also trying to woo Saudi Arabia, a staunch ally of the military-backed government, but he must do more to stop the spread of Wahhabism in some southern parts of the country like Assiut, Minya and Bani Sueif, which have become breeding grounds for extremists and where anti-Christian sectarianism has sporadically flared,” Ghabriel said.

Wahhabism is a more rigid brand of Islam practiced in Saudi Arabia and was introduced into Egypt in the 1970s by Egyptian migrant workers who had traveled to the Gulf after the oil boom.

Meanwhile, Christians’ optimism is fading about the issuance of a much-anticipated unified law for places of worship, promised in the 2014 constitution. Article 235 of the constitution says, “Parliament will issue a law to govern the building and restoration of churches.”

Unlike Egypt’s majority Muslims who can freely build mosques, Christians are obliged to seek a presidential decree to build or restore churches — a condition described by Youssef Sidhom, editor-in-chief of the independent weekly newspaper Watany, as “restrictive” and “flagrantly discriminatory.”

Even on rare occasions when Christians do get authorization to build a church, they often face stiff resistance from Muslim hard-liners in their communities. On June 17, homes and property belonging to Christians in the village of Al Bayda near Alexandria were ransacked, burned and looted by angry mobs after word spread that a house under construction was being turned into a church. The alleged perpetrators of the attacks were arrested and so were the victims — a measure often used to pressure Christians to drop charges against their Muslim assailants, noted Ghabriel.

He believes that the biggest danger facing Christians in Egypt is not the IS threat, but rather is the hatred toward Christians by radicals in the Christians' own communities. “That and the government’s intransigence in the face of hate speech and hate crimes," he said.

Ghabriel warned that the persecution of Christians undermines their safety and could ultimately undermine Sisi’s own efforts to position himself as a bulwark against terrorism.

“It is also hurting his image as an able leader who can restore stability and security to the country,” Ghabriel added.