Egypt's Coptic Christians say they are under attack by both extremists and the Egyptian government. 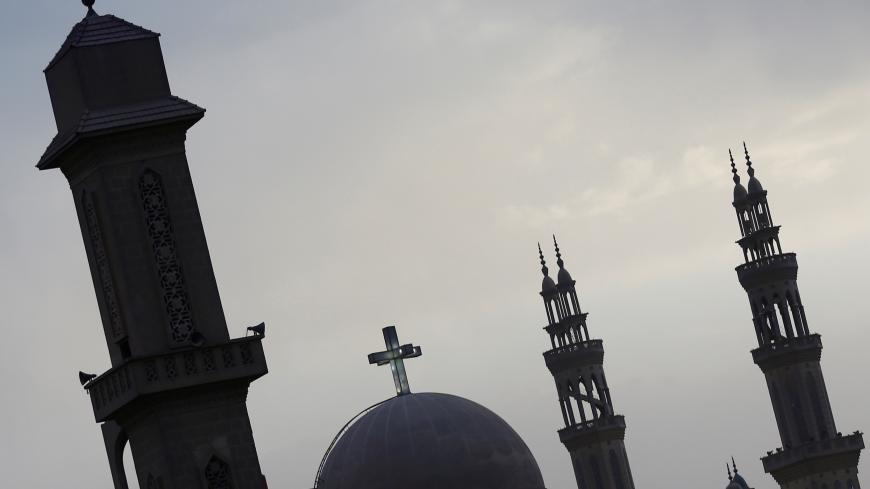 Minarets of a mosque and the cross above a church are seen at an agricultural road leading to Cairo, April 11, 2017. - REUTERS/Amr Abdallah Dalsh

When a long-awaited law on building and restoring churches went into effect in Egypt in September 2016, several Christian members of parliament hailed it as “a step in the right direction.’’ Members of Egypt’s Coptic Christian community — the country’s largest religious minority — celebrated the “landmark legislation” they hoped would ease restrictions on church building, some dating back more than 150 years, to the days when Egypt was part of the Ottoman Empire.

Before the law, a presidential permit was required to build or renovate churches, and requests for church building or renovation licenses were open-ended. The 2016 legislation set a time limit of four months for provincial governors (instead of the president) to respond to requests to legalize churches that had been built without permits.

Nevertheless, the law is not without flaws. Religious rights advocates have criticized the law for limiting the size of the church to the number of Christians in the area where the church is being built — a condition that does not apply to the building of mosques in the predominantly Muslim country.

More than a year after the issuance of the law, there is widespread disappointment and concern among Egypt’s Coptic Christians, who accuse the government of stalling on its promises “to end discrimination” against them. The closure of four churches in two southern Egyptian provinces (three churches in Minya and one in Sohag) by the authorities since mid-October has further fueled the frustration of Egypt’s Coptic Christian minority, which makes up about 10% of the country's population.

“The authorities are appeasing extremist Muslims by closing churches under the pretext that [the churches] pose a threat to social peace and stability,” columnist Youssef Sidhom, himself a Christian, wrote in a Nov. 11 op-ed for the Coptic Solidarity website, a portal advocating equal citizenship for Egypt’s Coptic Christians.

Security forces shuttered the three churches in Minya over “fears of imminent terrorist attacks,” according to Archbishop Makarios of Minya governorate, who has denounced the closures and exhorted the government “not to succumb to the fundamentalists.” Essam Badawi, the governor of Minya, has denied that the closures were prompted by security concerns, saying they were closed to worshippers because they were unlicensed, according to the Associated Press.

The southern Egyptian governorates of Minya and Sohag have long been flashpoints for sectarian tensions, which have flared sporadically in recent years. The worst of the violence occurred immediately after the July 2013 overthrow of Islamist President Mohammed Morsi. The mass protests that overthrew Morsi were backed by the military and by Christians, who were wary of Islamist rule. The situation has worsened in recent weeks in Minya, according to a statement released by Minya’s Coptic Orthodox Diocese on Oct. 30. Citing an attack by an ultraconservative mob on a church and on Christians’ homes in Minya the previous week, the statement urged the authorities “not to give in to the fundamentalists.”

“We remained silent after the closure of one church in the hope that officials would intervene," the statement read. "However, this closure was followed by others, as if praying is a crime and Copts should be punished for it.”

The statement added, “The constitution guarantees Christians the freedom to exercise religious worship; it is a major concern that extremists have imposed their will on state institutions.”

“The constitution guarantees Christians the freedom to exercise religious worship; it is a major concern that extremists have imposed their will on state institutions.”

The 2014 Egyptian Constitution describes freedom of belief as “absolute” and provides adherents of the three monotheistic religions — Muslims, Christians and Jews — the right to practice their religion freely and to build houses of worship. In practice, however, Egypt’s Coptic Christians continue to suffer persecution. During the past year, this persecution has manifested itself in a series of violent attacks on Coptic Christians and in “unfair policies that treat Christians as second-class citizens,” according to rights lawyer Nabil Ghabrial.

On April 9, at least 44 people were killed in twin bomb attacks at St. Mark’s Cathedral in the Mediterranean coastal city of Alexandria and St. George’s Church in the Nile Delta city of Tanta. The attacks took place moments apart as worshippers attended Mass marking Palm Sunday. Six weeks later, on May 26, as the country was still reeling from the shock of the deadly attacks, a third attack on a bus convoy killed at least 29 Christians and injured around 20 others. The Islamic State claimed responsibility for the attacks, prompting President Abdel Fattah al-Sisi to declare a three-month state of emergency that has since been renewed twice. The government also vowed to step up security at churches across the country and promised to protect Christians — a pledge that some Christians say has yet to be fulfilled.

“The government has restricted our movements, canceled our religious activities and is now shutting down churches that were previously open for worship, under the pretext that it is protecting us. Coptic Christians feel increasingly marginalized as a result of the biased policies,” Ghabrial complained, citing the authorities’ defiance of the church building law as an example of what he called the “unfair treatment and grievances endured by Copts on a daily basis.”

“The law on building and renovating churches is no more than ink on paper; it has not been enforced despite the formation by the Cabinet of a committee earlier this year tasked with determining the status of unlicensed churches,” Ghabrial told Al-Monitor.

On the heels of the recent church closures in Sohag and Minya, the Electricity Directorate cut power to Pope Kyrillos Church in the working class district of Shubra el-Kheima, north of Cairo, on Nov. 9, sparking fears among Christian residents of the area that the church would be shut down. Worshippers have since barricaded themselves inside the church, defying calls by Bishop Morcos of Shubra el-Kheima to evacuate the premises. They were still there when Al-Monitor visited the church Nov. 14. One worshipper said a weekly prayer service was canceled on Nov. 10 after Morcos warned of an imminent security threat by extremists.

A security source in Qalyubia who requested not to be named because he was not authorized to speak to the press said clerics at the church had asked police to beef up security outside the church after the clerics received threats from extremists warning them against conducting prayer services.

Father Kozman, who leads prayers at the church, told Al-Monitor that the new church had only been open for a week when the threats came.

“We have not placed any religious symbols outside — not even a cross on the rooftop — so as not to provoke the ire of the ultraconservatives,” he said, adding that a request to legalize the church submitted a couple of months earlier was still “under review” by authorities.

“Successive governments in Egypt have placed crippling restrictions on church construction," Ghabrial said. "The current government of President Abdel Fattah al-Sisi is no different. He is confident that he will get the votes of Christians in next year’s presidential elections regardless of the recent church closures. Their support for him is guaranteed: Not only did he rescue them from Muslim Brotherhood rule but he also continues to raise the specter of terrorism to spread fear in the society. Christians have to yet to realize that the president’s slogans of ‘a united Egypt’ and ‘equality for all citizens’ are no more than empty rhetoric. The massive number of unlicensed churches in Egypt bears testament to that.”