Following the attack on Cairo’s largest Coptic church, Egyptian Copts held demonstrations condemning President Abdel Fattah al-Sisi and his administration for failing to protect them, although others maintain their support. 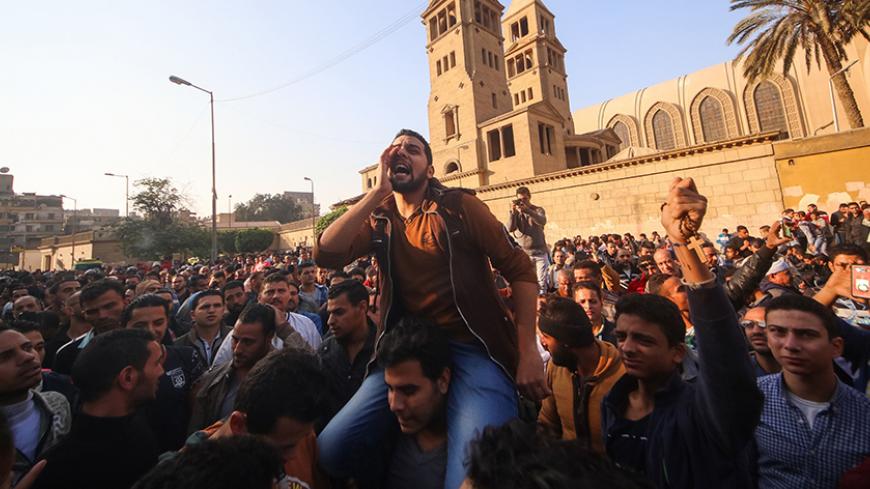 Egyptians shout slogans as they gather outside the the St. Peter and St. Paul Coptic Orthodox Church after it was struck by a bomb attack, Cairo, Dec. 11, 2016. - MOHAMED METEAB/AFP/Getty Images

CAIRO — Driven by rage, Mina Safwat, an Egyptian man in his 20s, took part in the Coptic demonstrations in front of the headquarters of St. Mark's Coptic Orthodox Cathedral in the Abbasiya district in Cairo on Dec. 11. The demonstrations come after an explosion ripped through the St. Peter and St. Paul Coptic Orthodox Church in Cairo, claiming the lives of 26 people and wounding 48, mostly women and children.

According to Safwat and the other demonstrators, the main reason behind this terrorist attack is the lack of security around the church. They believe that Interior Minister Magdy Abdel Ghaffar should be blamed for the attack and dismissed from office.

During the demonstration, Safwat told Al-Monitor that despite the repeated attacks against churches since June 30, 2013, the security forces have failed to improve security for Christian places of worship.

According to the Wiki Thawra website, 83 Christian houses of worship in 17 provinces came under attack on Aug. 14-19, 2013, after the sit-in staged by supporters of former President Mohammed Morsi was dispersed at Rabia al-Adawiya and al-Nahda squares. During the same period, 40 attacks targeted Coptic public and private property.

Safwat added that the protesters’ mounting anger and calls for the departure of President Abdel Fattah al-Sisi’s regime emanate from the Copts’ lack of confidence in the president, his government and the security forces. He said that Sisi’s positive behavior toward the Copts and his participation in Coptic religious ceremonies will not succeed in alleviating the Copts' constant fear, given the failure of his administration to defeat terrorism.

For his part, Sameh Haneen, a Coptic journalist and political activist, described the attacks on Christian places of worship and Coptic private property as a heinous Islamist punishment for the Copts’ participation in the June 30 demonstrations. Haneen told Al-Monitor that ever since, the Copts have shown absolute support for Sisi, who promised to consolidate the state’s efforts to maintain security and eradicate terrorism.

Haneen said that with time, this support started to fade as Copts felt that the Sisi administration was failing to provide them with security and economic progress, among other things.

Haneen said the proof is that the demonstrators prevented Sada El-Balad TV reporter Ahmed Musa, Al-Nahar TV reporter Riham Saeed and CBC anchor Lamees al-Hadidi from covering the demonstrations and expelled them from the area surrounding the cathedral. According to the Copts, media outlets have become known for their support of the current administration, and their reporters were dispatched to cover the demonstrations and convey the message that the Copts continue to support the regime.

Haneen said that Sisi turned a blind eye to the demonstrators’ anger and settled for attending the funeral of the victims and declaring the name of the bomber during the funeral without announcing any clear measures to avoid future such incidents. This further entrenches the Copts’ fear of the state's failure to protect them, even though they are among the state’s largest supporting groups.

During his participation in the military funeral of the church bombing victims Dec. 12, Sisi announced the security apparatus’ success in determining the identity of the suicide bomber, Mahmoud Shafiq Mohammed Mustafa, and arresting three men and a woman who helped him in the implementation of the bombing.

Bishop Boulos, the representative of Egypt’s Orthodox Church in the 50-member committee that drafted the current constitution in 2014 and was formed upon former President Adly Mansour’s decision in September 2013, refused to blame it all on the security apparatus. He told Al-Monitor that the security system around churches falls within the responsibility of both the church and the state.

Boulos said that the current administration's position on the recent bombing differs significantly from the positions of previous administrations on similar attacks on Christian worship centers. “While the perpetrators of al-Qiddissin (Saints) Church attack in December 2010 are yet to be revealed, Sisi announced the name of the person behind the St. Paul Church attack within 24 hours.”

Boulos added, “No state can completely protect itself from terrorism no matter how strong it is,” and asserted that security was not the main reason behind the ire of the young people who took to the streets. He accused most protesters of being originally opposed to the state and said that their anger did not emanate from the incident alone.

Boulos stressed that the state's interest in quickly restoring the St. Paul Church before Christmas shows that the state’s perception of the Christian places of worship in particular, and Christians in general, has improved.

Said Sadek, a professor of political sociology at the American University in Cairo, told Al-Monitor, “The Copts’ anger was not instantaneous, and it came a few weeks after the killing of Coptic Magdy Makeen on Nov. 15 at the hands of the security forces.” Sadek stressed that the incident provoked Copts and doubled their anger after the St. Peter and St. Paul Church attack.

The Copts, just like other Egyptians, have been feeling shocked at Sisi’s performance for some time now due to the difficult economic and security situation plaguing the country.

Sadek believes that the depth of the young Copts’ anger is due to the quality of the incident and its targeting of women and children. Their anger reflected the shock suffered by the Copts, but the impact of this shock, Sadek said, faded when the president attended the funeral and revealed the identity of the bomber.

Sadek confirmed that the Copts’ perception of Sisi and his administration has changed a lot and that the president indeed lost the absolute support of the Copts. He said that Sisi relies on the fight against terrorism to consolidate his popularity, and the Copts were among the millions who supported Sisi in his war on terrorism in the mass demonstration of July 26, 2013. Although it has been 3½ years since these demonstrations were held, he said, the terrorism targets have moved from the Sinai Peninsula to the center of Cairo.

Asked about the impact of the Copts’ frustration on their future political decisions, Sadek said that despite their reservations about the economic and security performance, the Copts’ fear of the rise of the Islamic movement will once again push them to renew their confidence in the current administration so long as there is no strong civil alternative that could move Sisi away.